Detroit Should Sell Tiger Stadium As Is 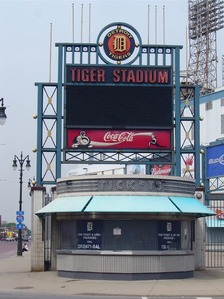 In a recent budget address to Detroit’s City Council, Mayor Kwame Kilpatrick preached the virtues of selling city-owned property. "I am pleased to inform you," exclaimed Kilpatrick, "that to date, we have sold or have commitments to purchase $36 million in [city-owned] property. This year we are developing whole new strategies, including bundling of properties as well as looking at the assets of city government that can be sold and placed back on the tax roles."

He’s right. The best thing the city of Detroit can do with its massive hoard of property (more than 40,000 parcels at last count) is sell it. The city could do even more to shed such assets. It could, for instance, minimize hurdles to privatization by removing unnecessary and expensive bureaucratic obstacles to acquisition. Case-in-point: Tiger Stadium.

For the past seven years, the city of Detroit has attempted to find a bureaucratic answer to the question: "What to do with Tiger Stadium?" Employees in the city’s Planning and Development Department were charged with determining what constitutes a best use for the corner of Michigan and Trumbull instead of simply selling the property to the highest bidder in an open, fair auction and allowing the winner to do with the property as he pleases.

Regrettably, the city has paid the Detroit Tigers organization more than $2 million to maintain the stadium over the past seven years while "feasibility studies" have been conducted on what to do with the asset. Failing to be persuaded that Tiger Stadium holds value, city planners seem bent on tearing down the stadium before selling the land — if it is sold at all. Rumor has it that the property may be used to build a new arena for the Red Wings.

A lack of ideas, money or interested, capable developers is certainly not Tiger Stadium’s problem. As a potential developer who met with city officials, I can say that there was never any serious consideration given to the proposals for an alternative use of the ball park.

The Navin Field Consortium (the group to which I belonged) proposed converting Tiger Stadium to its original 1912 configuration when the park opened as Navin Field. Our proposal was made privately to the Detroit Tigers with the suggestion that they follow the latest major league trend by locating one of their minor league affiliates nearby — in this case at the corner of Michigan and Trumbull.

We explained that the New York Yankees have a minor league team on nearby Staten Island and that the New York Mets have a team down the road in Brooklyn. In professional hockey, the Philadelphia Flyers have their top farm team located in their old arena adjacent to their new facility. Similarly, the Cleveland Indians, Toronto Blue Jays and several other teams have minor league affiliates within a short drive of the major league venue. For once, we felt that the Tigers could be ahead of the curve instead of behind it.

From a sports marketing perspective, the possibilities are endless: Cross-promotion and schedule coordination would assure that the two teams complement one another; the Tigers would be the only franchise in Major League history to preserve and utilize their former facility; Detroit would be preserving an internationally recognized baseball landmark; profits from the minor league operations could serve to bolster the major league team’s competitiveness; and the Tigers could reconnect with disenfranchised fans who lost interest in the team when they moved out of Tiger Stadium.

The consortium also proposed that the stadium be privately financed without subsidies from the city of Detroit or the Detroit Tigers. The only expense would be a market rate for rent, no different than the rent the Tigers pay to house their minor league team in a city like Erie, Pennsylvania.

Because such a venue has the potential for multiple tenants, including concerts and special events, it is widely believed that the site could become a real money-maker. Cooperation from the city and the team would undoubtedly assure that raising capital would not be an issue. We also proposed that the stadium be purchased from the city at a market rate or at auction.

The consortium included architects and builders who presented detailed cost estimates for a partial demolition and reconstruction of the old park. They determined that it would be less expensive to convert Tiger Stadium to its original form than to build a new minor league ballpark.

Incidentally, metro-Detroit is the largest metropolitan area with only one professional baseball team. It is only a matter of time before a minor league team locates in the Detroit area. More than likely, an independent league team will locate in a Detroit suburb, and the Tigers will have a competitor instead of a partner.

Shortly after the Detroit Tigers departure in 1999, developers made proposals to the city’s planners for alternate uses for Tiger Stadium. One such party is McCormack Baron, a real estate development firm from St. Louis.

It didn’t take long before principals at McCormack Baron were disenchanted with the way Detroit does business. In an April 2000 interview with The Detroit News, the firm’s vice president, Jack Hambene, announced that he had heard no response from the city in the eight months since his firm had submitted its proposal.

The city’s reply? "We are not obligated to get back to McCormack Baron," Sylvia Crawford, the Planning and Development Department’s spokeswoman, told The News. "We are putting a contract together for a predevelopment study. We are doing a study to see if it’s feasible to renovate Tiger Stadium."

But city feasibility studies are unnecessary. Detroit could privatize (that is, sell) Tiger Stadium by issuing a relatively simple Invitation to Bid. An ITB is used by units of government primarily when it is easy to define the service or asset being contracted or sold outright, and the bids are almost always opened at a very public meeting.

The highest bidder for Tiger Stadium would win the land and building, and do with the property as it saw fit: construct a Wal-Mart, residential lofts, a parking lot, or use it as a sports stadium. The possibilities are endless. Selling it in this fashion would constitute the highest valued use of Tiger Stadium by the marketplace.

All too often politicians and their lieutenants view publicly owned assets as pawns in power struggles. How city "jewels" are valued by municipalities are often wildly different than how free people spending their own resources would value them. But city-owned property does not exist to advance the interests of a bureaucracy.

Steven Thomas is the owner of Detroit Athletic Co., a memorabilia store west of Tiger Stadium, and an adjunct scholar with the Mackinac Center for Public Policy, a research and educational institute headquartered in Midland, Mich. Permission to reprint in whole or in part is hereby granted, provided that the author and the Center are properly cited.