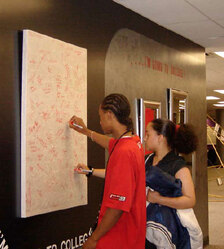 Students at Mott Early College High School sign a canvas displayed in the hallway of the school which demonstrates their commitment to attending college. Written below the canvas (and several other places) is a phrase which reads, “I’m going to college!”

Inner city youths often have a hard time finishing high school, let alone thinking about going to college. A group of private foundations, however, is helping make both a reality – at the same time – in Ohio and 12 other states.

"No one wants to put down public education," says Marge Mott, co-field director for KnowledgeWorks Foundation in Ohio. "But the reality is, schools aren’t working to the benefit of all children. There are things that can be done differently and hopefully done better."

Mott, who earned a doctorate in education from the University of Dayton, oversees Early College High Schools in Ohio. Through funding, on-site support and guidance from KnowledgeWorks, the Bill and Melinda Gates Foundation and Boston-based Jobs for the Future, private groups are helping public schools reach more students than ever before. The Carnegie Corp., the Ford Foundation and the W.K. Kellogg Foundation also are involved.

"The drop-out rate in urban schools is about 50 percent," Mott said. "Of those who do go on to college, almost none finish their first year, or go beyond that. We need these kids to grow up to be productive adults, to earn good livings and to become leaders."

The concept behind the program is to identify students in eighth grade and move them into an ECHS. An Early College High School is usually affiliated with a university or community college, and located on the school’s campus. Students take high school classes while at the same time gently easing into college-level courses.

"From the name, one might think this is some special program that only takes the cream of the crop," Mott said. "But our mandate is to serve the underserved kids, often the poorest of the poor."

Mott says an Early College High School is not a charter school. It is an autonomous school that awards its own diploma, but maintains a relationship with the local public school district.

"Our criteria is that a student cannot be older than 15 and must be starting their freshman year of high school," Mott said. "They commit to being here four to five years, and during that time they will earn transferable college credit."

Other requirements include a 95 percent minimum attendance record, heavy parental involvement, job shadowing, an internship and successful completion of the Ohio Graduation Test.

Mott, who grew up in Michigan, was involved with the first ECHS in Ohio when it was created more than three years ago. The Dayton Public Schools, University of Dayton and Sinclair Community College are partners in DECA, the Dayton Early College Academy.

Mott said although she was on campus for a different reason, the dean of the college of education invited her to sit in on a meeting where DECA was being discussed.

"I’m kind of an out-of-the-box thinker, and by the time I left the meeting, I had a new job," Mott said. "It has been the most exciting work I’ve ever done. The possibilities are endless."

Mott said her training as an elementary school teacher, along with experience in teaching learning disabled students in high school, has been a perfect fit for the ECHS setting.

"That’s been a good combination that most of us seem to have," she said. "It helps to be able to individualize the basic skills students need and take them from where they are now to where they need to go."

Mott said the "three R’s" of teaching theory, "relevance, rigor and relationship," are strongly stressed in the ECHS setting.

While the ECHS model is designed to help at-risk students, students can vary as to how or why they are at risk.

"There really is no middle class in urban schools," Mott said. "Families with the resources either send their kids to private schools or move. The kids who are left are very vulnerable to dropping out, many have parents who didn’t go to college, and others are very bright but it’s not considered ‘cool’ to be smart."

As is the case with change or innovation, the establishment’s first reaction is often negative. That has held true for the ECHS movement.

"At first it’s met with a lot of suspicion," Mott said. "Mostly because it is so bizarre. It is such a new concept."

That suspicion has been dispelled enough to allow Early College High Schools to open in Dayton, Toledo, Lorain-Elyria, Canton and Columbus. Mott said part of DECA’s early success was the cooperation on the part of the Dayton teachers union.

"They agreed to a waiver on hiring, which was a great blessing in that we could hire the teacher who was best for the school and not have to take the next person on the seniority list," Mott said. "The Ohio Education Association also has been very helpful in working with us to remove barriers."

Because of those barriers, and the need for open lines of communication, planning meetings for an ECHS include a union representative. A new school goes through a year of planning, with teachers and staff on board by May, a full three months before students start attending.

For example, although DECA teachers remain part of the Dayton Education Association, there has been a compromise on the seniority clause of the established contract. DECA is able to hire the teachers it thinks will best fit the needs of the students, and does not have to accept teachers who want to transfer to the school simply because they have been employed in the district longer than a newer teacher.

"The cooperation varies from town to town and district to district," Mott said. "This is really about changing and enhancing what is already being done in schools. It’s an attitude shift."

Much like Michigan, Ohio’s public education dollars "follow the student," so the local school district does not collect money from the state when a student attends an ECHS. To help keep the ECHS connected to the community, a governing board is set up, including the local school superintendent, a liaison from the college president’s office, parents and community members.

Community support is necessary because eventually, the schools will be on their own.

"When the time comes for them to be independent from the Gates Foundation, they have to remain viable," Mott said. "Foundations can’t support all of these schools forever."

In that vein, the college can help the high school with resources while also getting a benefit. At the University of Dayton, for example, education students and graduate students gain experience serving as tutors and teachers in the high school, while the development and public relations offices can help guide the high school staff through how those functions work.

KnowledgeWorks also provides coaches who visit the buildings two to four times a month, then meet with foundation field representatives once a month to let them know what is going on in the high schools. Several professional development opportunities also are made available, both in the schools and at locations around the state. This includes a Leadership Institute for all ECHS personnel each June.

About 20 percent of the students who enroll in an ECHS are ready by the second semester of their freshman year to begin taking some college classes. The goal, by the time they graduate from the ECHS, is to have at least 60 transferable college credits, while many will leave with an associate’s degree in hand.

"Advisers are there to meet with the students and parents, develop a Personal Learning Plan and help them along the way," Mott said. "Before they can start college classes, students must pass an entrance exam and show maturity that they are ready for that step."

On one wall inside DECA hang three mirrors, all at varying heights. Above them is a banner that reads "I’m Going to College." Students can sign their name on the wall, and many repeat the phrase as they walk past and look in the mirrors.

"When those kids take their first college class, you can just see the difference in them," Mott said. "Suddenly they walk a little taller. They are very proud of what they’re doing."