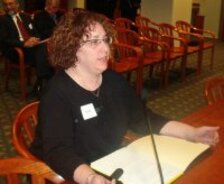 The Mackinac Center's Diane S. Katz testifies to a state House subcommittee on May 18, 2005.

(The following is an edited version of the May 18, 2005 testimony provided by the Mackinac Center for Public Policy’s Diane S. Katz to the Michigan House Appropriations Subcommittee on Economic Development. The subcommittee is reviewing Gov. Jennifer Granholm’s proposal to sell $2 billion in state bonds to finance investments in the research and development of technology and energy in the state of Michigan.)

I will focus primarily on the proposed issuance of $2 billion in general obligation bonds intended to diversify Michigan’s sluggish economy by expanding technology and energy research and development — and in the process, to create 72,000 jobs.

That’s a very tall order. With all due respect to the governor’s undoubtedly good intentions, Michigan would certainly need at least 72,000 new taxpayers to shoulder such a heavy new debt load! The $2 billion in bond principal would ultimately entail debt service of at least an additional $120 million annually, an obligation that would extend 30 years.

As it is, Michigan’s debt per capita has jumped in nominal terms from $241 in 1979 to $1,544 in 2003. Whereas Michigan ranked 36th in per-capita debt a decade ago, it now ranks 25th among states. Moreover, the ratio of state government’s general obligation bond debt to its total General Fund expenditures doubled between 1991 and 2001.

All of which has not gone unnoticed by Wall Street. Indeed, Standard and Poor’s recently downgraded Michigan’s rating for general obligation bonds because of the state’s depletion of reserve funds to meet appropriations.

The fiscal consequences of $2 billion in new debt are significant, but there are other factors to consider as well. For example, are the objectives realistic? Can state government accurately predict the most promising investment opportunities? What are the likely effects of government so aggressively steering capital to select ventures? Are there policy alternatives that would more effectively achieve the intended results?

Such questions produce a complex calculation. Thus, it is vitally important that we marshal all available facts to inform our conclusions. A well-reasoned decision on the governor’s proposal will depend, in part, on knowing how well the state has managed other major bond funds, as well as understanding the consequences of Lansing’s increased reliance on borrowing to finance programs.

That is why I am here today. In 2002, I undertook the first assessment of the Clean Michigan Initiative, among the state’s most ambitious bond programs to date. Michigan voters in 1998 authorized the issuance of bonds totaling $675 million for environmental cleanup and natural resource protection. The results of my analysis bear directly on your consideration of the 21st Century Jobs Initiative.

On the issue of fiscal consequences, our findings indicated that the sale of bonds to finance the Clean Michigan Initiative dramatically — and unnecessarily — inflated program costs.

In fact, the financial, legal and administrative costs associated with the CMI bonds that had been sold through 2002 amounted to fully 60 percent of the cost of the projects they had financed so far. Thus, in addition to repaying the $153 million in principal outstanding in 2002, taxpayers owed bondholders an additional $91,234,136 in interest, while legal and other administrative services related to the bond issues cost an extra $346,000. Ultimately, taxpayers will repay about $1.60 for every dollar spent through 2002 on CMI projects.

Such debt might be justified if the borrowed funds were spent to counteract significant environmental threats. But our findings indicated that the CMI funding formula did not adequately distinguish spending priorities.

And this was no surprise. By creating a new bureaucracy to allocate enormous sums, the Clean Michigan Initiative exacerbated budgetary politics and undermined fiscal discipline. For example, requiring a geographically "fair" distribution of CMI funds skewed spending priorities and frustrated judicious allocation of funding.

A substantial portion of the money was reserved for commercial, recreational and aesthetic improvements that would yield relatively minor environmental benefits. For example:

The largest portion of CMI funds — a minimum of $263 million — was reserved for decontaminating abandoned industrial sites, known as "brownfields." The goal of these cleanups was to curb suburban "sprawl" by increasing the availability of unsoiled and unencumbered urban properties. State planners hoped that once investment was redirected, cities would be revitalized, bringing a halt to further development of farmlands and forestlands.

Our research indicated that this expectation was as unrealistic as the belief that Gov. Granholm’s bond proposal will create 72,000 jobs. Ground contamination is only one of myriad factors that dissuade urban redevelopment. Investors also are drawn to suburban sites for many reasons other than the availability of uncontaminated property.

Likewise, there are myriad factors other than a lack of capital that dissuade job creation in Michigan. Punishing tax rates and misguided regulation rank highest among them.

Capital is indeed difficult to obtain — but for good reason: Investment is a risky proposition. Effectively managing this risk requires a degree of knowledge and experience that state government, no matter how well-intentioned or dedicated, simply does not possess. Our experience with the CMI and similar programs, including the Michigan Economic Growth Authority and the Broadband Authority, prove it true.

With regard to the CMI, our examination found little evidence that brownfield cleanups funded by the state attracted private investment to urban areas, a principle goal of the initiative.

More progress might have been achieved had the state determined which of its brownfield projects had "good" and "excellent" redevelopment potential before funding decisions were made, but alas, the money was targeted to projects before their potential had been rated. Instead, the Michigan Department of Environmental Quality essentially guessed that tens of millions of dollars invested in specific brownfield cleanups would spur private investment and job creation.

But don’t fault the bureaucrats. The outcome was predictable. As the Mackinac Center has suggested elsewhere, no government agency can survey the entire state’s economy, grasp all of its nuance and detail (mostly held in the minds of millions of individuals) and successfully pick winners and losers.

Our findings regarding the CMI were not the only ones critical of the program. The Michigan Office of the Auditor General has reviewed the CMI redevelopment-based cleanup projects that have received the majority of the CMI bond funds. This performance audit found that only 25 percent of the facilities reviewed achieved the goal of creating jobs and obtaining investment.

With respect to the 21st Century Jobs Initiative, Gov. Granholm has proposed that an independent board select recipients for funding. But such committees tend to be politicized and driven to achieve compromise. Neither characteristic bodes well for making complex economic decisions.

It is also important to consider the impact of substituting tax dollars for private investment. General obligation bonds are exempt from state and local taxation, and a federal tax exemption may be granted on the interest earned by bondholders, depending upon how the state applies the borrowed funds. In the case of the CMI, the state’s privileged access to capital competed with private stewardship efforts. And in the case of the jobs initiative, the state’s favored treatment of some firms would undoubtedly put other businesses at a competitive disadvantage.

There’s no shortage of examples in which state government has attempted — and colossally failed — to micromanage the economy. In fact, disastrous experiments in a government-run economy prompted citizens in 1851 to amend the state Constitution to bar the state from direct investment in business. Consequently, Gov. Granholm’s jobs initiative would require amending these provisions, thereby undermining the very private entrepreneurship that Michigan so desperately needs.

We also have a great deal of experience with government job-creation schemes similar to the governor’s 21st Century Initiative. The Michigan Economic Growth Authority is chief among them.

In a recent study of MEGA, the Mackinac Center documented the failure of the state’s principal jobs creation program. Through December 2004, MEGA’s agreements were projected to directly create as many as 35,821 jobs. In reality, the program has produced just over one-third of the direct jobs claimed — a total of 13,541.

This is particularly true with respect to telecommunications. Advances in technology have created enormous opportunities for telecom innovation. Yet overly broad and arbitrary regulations have deterred telecom investment in the state.

The fact is that states with the lowest tax and regulatory burdens and the freest labor markets have the best sustained economic performance.

Experience has shown that a policy lacking fiscal discipline, well-reasoned priorities and realistic goals will fail to achieve the intended results. Such is the case with the proposed 21st Century Jobs Initiative. To the extent we misdirect our resources, Michigan’s most pressing problems will go unresolved.


[1] This calculation and the others in this paragraph were performed in August 2004 using the most recent federal statistics available at the time.