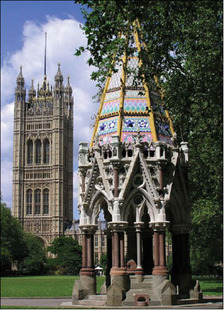 This is the monument near the Thames River in London, which honors Clarkson and other key antislavery figures.

If you leave my office, turn right and walk for, say, 300 yards, you’ll reach Victoria Tower Gardens on the bank of the Thames, across from Lambeth Palace. There you will find a glorious Victorian monument, and on the west side you will read these words:

ERECTED IN 1865
BY
CHARLES BUXTON MP
IN COMMEMORATION OF
THE EMANCIPATION OF SLAVES 1834
AND IN MEMORY OF HIS FATHER
SIR T FOWELL BUXTON
AND THOSE ASSOCIATED WITH HIM
WILBERFORCE, CLARKSON, MACAULAY, BROUGHAM
DR LUSHINGTON AND OTHERS.

For two centuries, Britain was the centre of the slave trade. Ships left England for West Africa, where cheap goods were traded for slaves. The boats then crossed the Atlantic, where the slaves were often traded for cotton, which was then brought back to the Liverpool Cotton Exchange to feed the textile mills of Lancashire. The monument on the Thames honors citizens who mustered the righteous indignation and formed the organizations that eventually took the "slave" out of the infamous phrase "slave trade," vanquishing slavery itself within the vast British Empire.

What a story Lawrence Reed tells here of Thomas Clarkson, a man who changed the way the world thought regarding this momentous issue! It is a testimony to passion, perseverance and the power of ideas. It should be read and re-read everywhere. If it is, it will help inspire new generations to similarly noble feats.

Of course, few causes have the moral gravity of the crusade against slavery, but many important battles remain in the fight for human freedom today. When I first read Reed’s account of the Clarkson drama, the example of Nobel Prize-winning economist Milton Friedman came to mind. He, too, had some ideas that were unconventional at the time. His insights and writings proved enormously influential in replacing the draft with an all-volunteer military, in making the case for limiting government’s involvement in many spheres of life, and in demonstrating that the disease of inflation was the product of mismanagement by monetary authorities. His visits to Clarkson’s homeland in the 1970s, organised by the Institute of Economic Affairs, convinced our country to end many destructive policies, with the result that rampant inflation and nationalisation of industry are things of the past.

Like Clarkson, Friedman has focused on liberating people in our lifetime from shackles of one kind or another. Now in his 10th decade, he champions educational choice through the foundation he and his wife have established, and through his support of institutes like the Mackinac Center for Public Policy.

So the Clarkson story does have modern counterparts, even as it remains a classic example of the strategy economist F. A. Hayek outlined in his famous "The Intellectuals and Socialism": Reach the intellectuals with reasoned argument. It will be their influence on society that will prevail, and the politicians will follow.

The world needs more Clarksons, more Friedmans, more educational institutes like IEA and the Mackinac Center — and more essays like Larry Reed’s explaining how important these contributions have been. 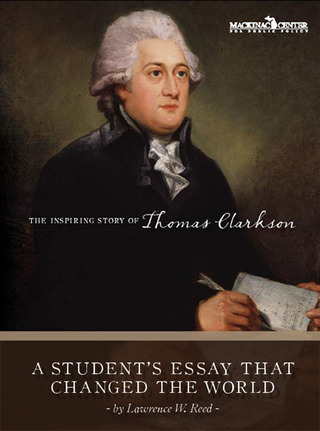