Remembering a Giant: A Tribute to Richard H. Headlee 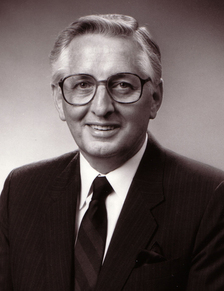 It is with a mixture of profound sadness and fond memories that we mark the passing of Richard H. Headlee, a giant of Michigan political history. Every state citizen who believes in limited, responsible and accountable government mourns the loss of a genuine hero. He passed away early Tuesday morning.

Dick Headlee was a man of character — honest, dependable and committed to the highest standards of speech and conduct. Integrity was the quiet subtext of everything he did.

Dick treated his friends like family. He looked for the best in everyone, and when he found it, he was generous in his praise.

Some men achieve virtue by retiring from the affairs of the world. Not Dick. He was devoted to God, family and country, and he spoke as a straight-shooter, never beating around the bush to curry favor or obscure his views. In his public life, he remained a man of principle, and his views were clear-headed and consistent.

Dick believed passionately in a free society. He knew that preserving freedom required not just eternal vigilance, but bold and determined action. He didn’t run for governor because he wanted to be "in charge" or because he craved the limelight. He was a living example of the ancient republican ideal: the citizen who sets down his plow to put right what is wrong and serve his community. Action in time of crisis was a natural extension of who Dick was, and Michigan is demonstrably better for it.

He lost a close race for governor in 1982, but in other ways, he governed much of Michigan politics for decades. His tireless work on behalf of beleaguered taxpayers, enshrined in 1978 in our state constitution’s "Headlee Amendment," gave Michiganians a powerful shield in the battle to restrain government excess.

His firmness stiffened the spines of later leaders. His forceful yet congenial persuasiveness, often wrapped in clever verse or rhetorical flourish, won the hearts and minds of countless citizens.

Dick Headlee was a good friend and advisor to the Mackinac Center for Public Policy. We are grateful for his contributions to our organization and to our state.

But we will miss the many interactions we had with him over the years, and we extend our deepest sympathies to his wife, Mary, and the entire Headlee family.

(These biographical notes are edited excerpts of information supplied to the Mackinac Center by the Alexander Hamilton Life Insurance Company in 1993.)

Richard H. Headlee was born in Fort Dodge, Iowa, on May 16, 1930. He finished high school in Richfield, Utah, and graduated from Utah State University in 1953.

In 1964, Headlee moved to Michigan, and in 1965 he was called upon by Gov. George Romney to organize a Christmas gift drive for 8,100 Michigan servicemen in Vietnam. In 1966, he became an advisor to Gov. Romney, and in 1967 and 1968, he worked with the Romney for President Committee.

In 1978, Dick served as chairman of Taxpayers United for Tax Limitation, an organization that led a successful drive to amend the Michigan Constitution. The "Headlee Amendment," among many provisions intended to limit government and protect taxpayers, banned unfunded state mandates on local units of government and placed a limit on all forms of taxation and government spending. In 1982, he was the Republican nominee for governor of the state of Michigan.

In October 1987, Dick Headlee received a heart transplant at LDS Hospital in Salt Lake City. He was chairman of Oakland University and the Michigan State Chamber of Commerce, and he served as a bishop, as part of a stake presidency, and as a regional representative of the Church of Jesus Christ of Latter-day Saints in Michigan.

In the late 1990s, Dick moved to Utah to enjoy a well-deserved retirement closer to his many sons, daughters and grandchildren. He continued his dedication to the principles of liberty and limited government by serving on the board of the Sutherland Institute, a policy group that studies education, poverty and family issues.

Lawrence W. Reed is president of the Mackinac Center for Public Policy, a research and educational institute headquartered in Midland, Mich. He served on the State of Michigan’s Headlee Amendment Blue Ribbon Commission, whose report in 1994 documented the success of the Headlee Amendment’s first 15 years. Permission to reprint in whole or in part is hereby granted, provided that the author and the Center are properly cited.