A successful education means "getting involved"

Recent grad says make the most of high school 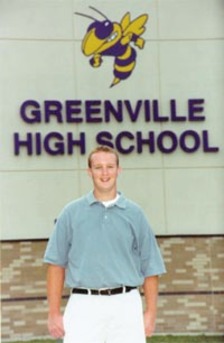 "You can see the difference between just schooling and getting an education when you look at different teachers," says Mike Wolf, a student recently graduated from public Greenville High School in western Michigan.

"Getting an education is . . . [when] teachers have you do experiments, go on field trips," he explains. "Others talk at you with notes and lectures- you are just listening to someone yap- that's schooling."

The easygoing 18-year-old ought to know the difference: As a student, he had many teachers who encouraged him to explore areas that interested him.

"My advice to kids," he says, "is to get involved. Join things that you are interested in. You gain friends and valuable experience. When you volunteer, you feel good knowing you are a part of something bigger than yourself. The more you get involved, the better time you'll have in high school and the better you will be equipped for college and work."

Mike's many extracurricular activities included playing violin in orchestra, participating on the baseball and golf teams, editing the student newspaper, serving as student representative to the Greenville Board of Education, and acting as chair of public relations for the Youth Advisory Council, an arm of the privately funded philanthropic Greenville Area Foundation.

"Mike put himself in a position for leadership roles to gain more confidence," says Deb Larsen, English and journalism instructor at Greenville High and Mike's adviser. "He has learned how to work with people and to motivate them- a real sign of maturity. He sets an example."

Mike's drive to excel did not go unnoticed. During high school Honors Week, he received the Commander Grow Award, which is given to only one male student for outstanding moral character, responsibility, and integrity. Mike was also awarded several college scholarships, including one from Northwood University in Midland, where he has chosen to pursue a double major in business management and computer science.

How did Mike learn about computers? He says he just spent time at the computer figuring things out. When his family first got a modem for their computer, there were several small computer companies in town. He often would ask questions in their chat rooms and learn from their responses.

When Mike's parents, Kathy and Dan Wolf, noticed how much he used the family computer, they provided him with his own system.

"He began programming at a young age," Kathy says. "We encouraged him to join things like the Youth Advisory Council, but ever since I can remember, he has taken the reins of his own life."

Mike's new interest led to a job with Pathway Computing, a local computer service provider, as a support technician and Web designer. During the 1999-2000 school year, Mike also worked part-time as a computer technician and Web master at his school. That job became full-time over the summer.

"Adults come to Mike for technical help now," Char Lothian, one of his former teachers, says. "He will have a positive influence on people wherever he goes because he comes to life with a positive attitude."

Computers aren't Mike's only interest. A couple of years ago, he wanted to earn more money, so he decided to learn about the stock market by visiting Internet sites for investors. He asked general questions of experts in chat rooms. Then he read a book entitled Greed Is Good.

"The book taught me a lot about investing and about how the same principles apply to life- like taking risk in moderation," he says.

Mike invested in a mutual fund and a couple of stocks, made money, and now is backing off, putting the money he earned toward college.

Larsen says she encourages her students to be accountable and self-motivated. With Mike she didn't have to. "He is not afraid to get in and work hard. His family instilled that work ethic in him," she says.

Mike's mother Kathy emphasizes that prayer has played an important role in their support of their children. "I pray for my kids that they will turn out to be the people God wants them to be," she says.

"I work hard," Mike says. "But I want to be happy, too, and to make others happy in the process."

And one thing that would make Mike happy is to someday own his own computer-related business. But how does he plan to succeed in such a competitive industry?

"I will see what niche needs to be filled when the time comes," he says.