There has been long running debate around the world about the causes and consequences of economic growth. This study objectively measures economic freedom both nationally and from a local level in Michigan, and it demonstrates correlations between greater freedom and economic well-being. It overwhelmingly and repeatedly finds positive connections between economic liberty and outcomes that many policymakers profess to want, such as low unemployment rates and population growth.

This study uses an economic freedom index for the 383 U.S. Metropolitan Statistical Areas, using data through 2017 across three major components of government policy: spending, taxes and labor market regulation. That index, originally published by the Reason Foundation, is modeled after similar ones created for nations and states. Previous research has found those same positive correlations between liberty and economic well-being at the national and state levels. 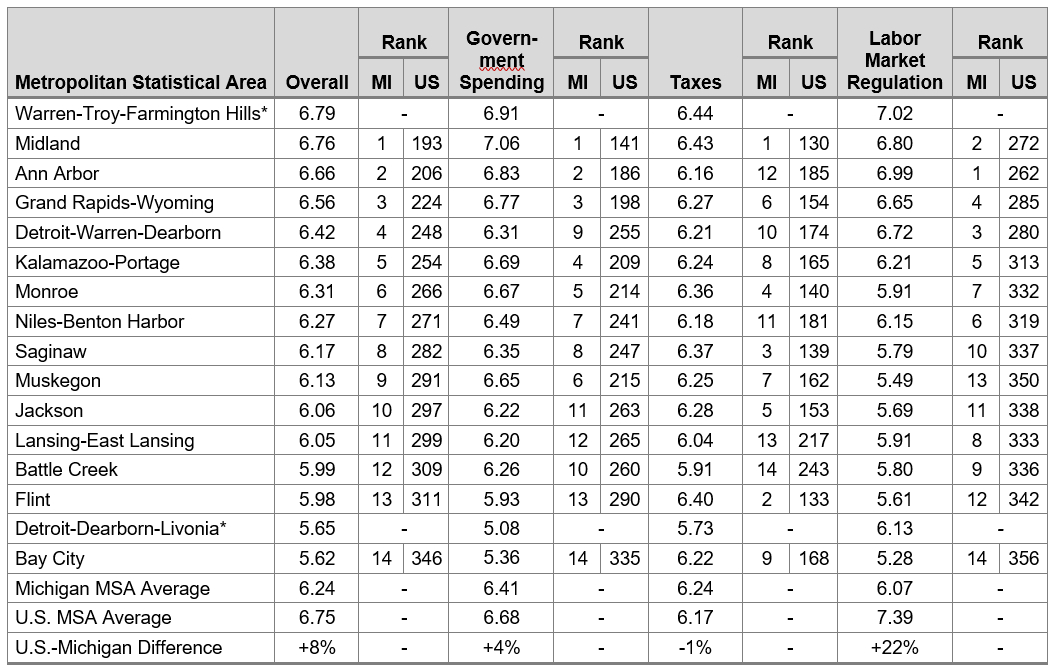 These are just three examples of our findings. We examine the economic freedom scores in MSAs nationwide and for 14 metro areas in Michigan and compare these to data of unemployment rates and employment and population growth. We focus specifically on labor market regulations, such as minimum wage burdens and bureaucracy size. The findings suggest that MSAs with greater levels of economic freedom tend to perform better in economic terms compared to those with less economic freedom.

It is important to note that correlation is not causation, and that there are other variables across nations, states, provinces and local units of government that impact these economic outcomes. Policymakers should, however, understand that many academic scholars have looked at questions surrounding economic liberty and associated outcomes, while controlling for many other variables, and they overwhelmingly find positive outcomes. Our findings are consistent with that previous work. This study contains a robust review of that literature.

Given the overwhelming evidence that economic freedom is good for employment growth, the unemployment rate and population growth, lawmakers would be wise to approach policy through a freedom lens. Would a particular policy increase the tax burden on Michigan citizens or impose job-killing labor regulations? If so, it should be reconsidered. Lawmakers could likewise do much good by adopting policies more conducive to free and voluntary association, ones that give individuals more economic agency, opportunity and very likely, prosperity.