A classic article in economics — Charles Tiebout’s “A Pure Theory of Local Expenditures” from 1956 — held that people “vote with their feet” by moving to areas that provide a mix of public and private goods that they favor, among other things. By examining the relationship between economic freedom and population growth, we can gain some insights on how people feel about policies that promote economic freedom.

Policymakers everywhere should be sensitive to changes in population. There is arguably no better single measure of quality-of-life issues than migration, whether it represents an inter-state or intrastate move. People move for a variety of reasons, but the determinants of interstate migration have long been studied by economists and others. We would argue that economic opportunity is a prime motivator. This subject has been made all the more relevant due to the recent release of Census Bureau data that showed Michigan was once again losing population.[64]

Our own, new MSA-specific research and past scholarship by the Fraser Institute demonstrate strong correlations between economic liberty and population growth at the local and state level, respectively. Academics have also taken on the subject more narrowly, looking for the most prominent variables that influence migration.

For example, economist Richard Vedder has argued that a great story of American migration patterns has been the large movement of people from non-right-to-work states (those with less labor market freedom) to those with more. His study, which ran statistical analyses to control for other confounding variables like the weather or taxes, found: “Without exception, in all the estimations, a statistically significant positive relationship … was observed between the presence of right-to-work laws and net migration.”[65] In other words, labor market freedom helped inspire moves into those states with more of it.

Then there are the more recent economic freedom and migrations studies already referenced in our literature review. The 2020 study from the Journal of Entrepreneurship and Public Policy looked at state level migration and labor market freedom scores from the Fraser Institute’s Economic Freedom of North American index and found that increasing labor market freedom by just a single percentage point is associated with “a 2.8% increase in the gross in-migration rate.” That means a 10% increase in a state’s labor market freedom score (from 6 to 6.6) would raise gross state in-migration by about 28%, a heady figure.[66]

As Graphic 20 shows below, MSAs in the United States in the highest economic freedom quartile saw 2017-2019 population growth that was nearly 10 times higher than those in the lowest quartile. The difference through 2020 (not shown in the graphic) was even greater: population grew more than 20 times faster in the highest freedom areas (3.33% vs. 0.15%). 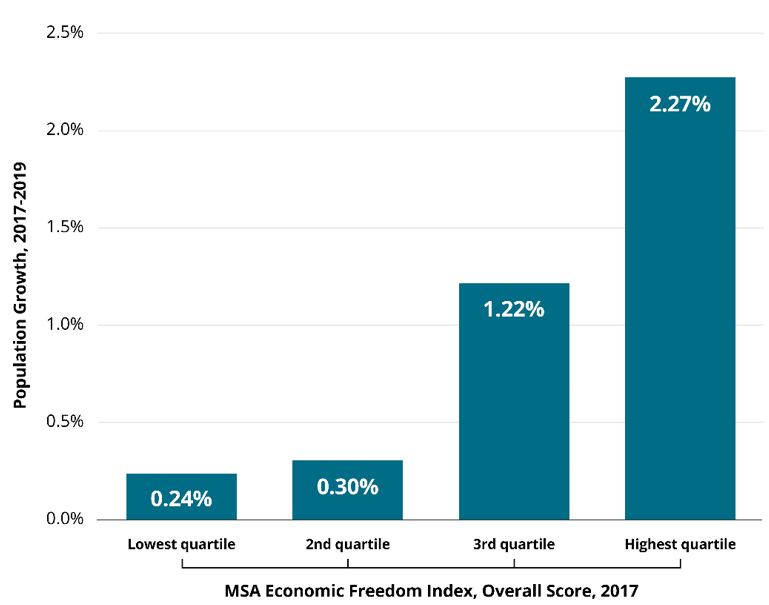 Similar results were found based on labor market freedom. The highest freedom areas saw growth that was about 10 times faster from 2017 to 2019 (Graphic 21). 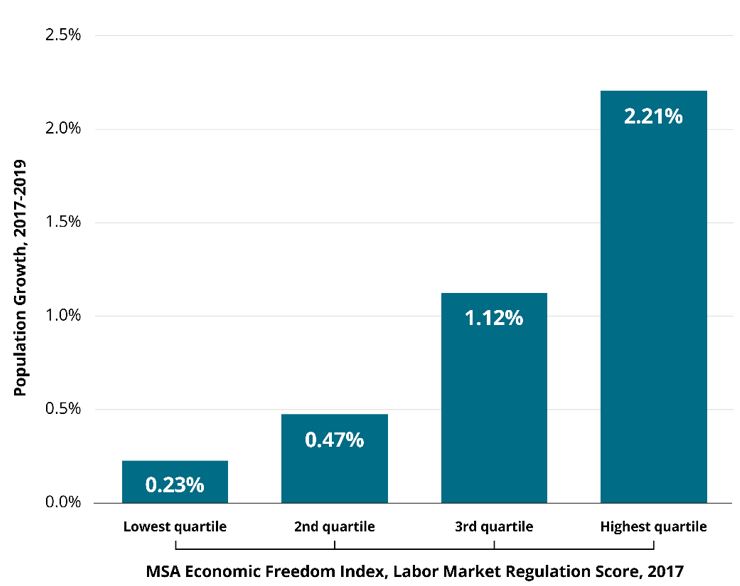 Of the 14 Michigan MSAs, only Grand Rapids, the third-most free in Michigan, saw population growth above the national average (Graphic 22). Only four MSAs saw population increase at all from 2017 to 2019. Population declined in the other 10 MSAs. There was a similar pattern when we examined growth through 2020 (the most recent year available). 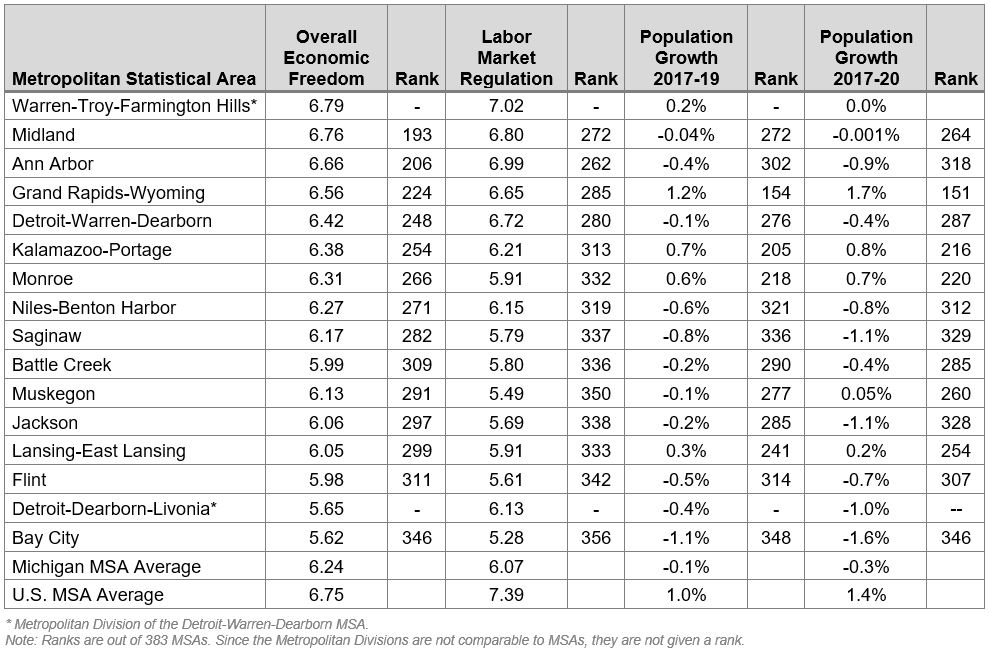 Graphic 23, below, shows that of the 383 MSAs in the country, the ones with the least burdensome minimum wages (full-time income as a percentage of per capita personal income) saw population grow nearly 75% faster than those with the most burdensome ones. 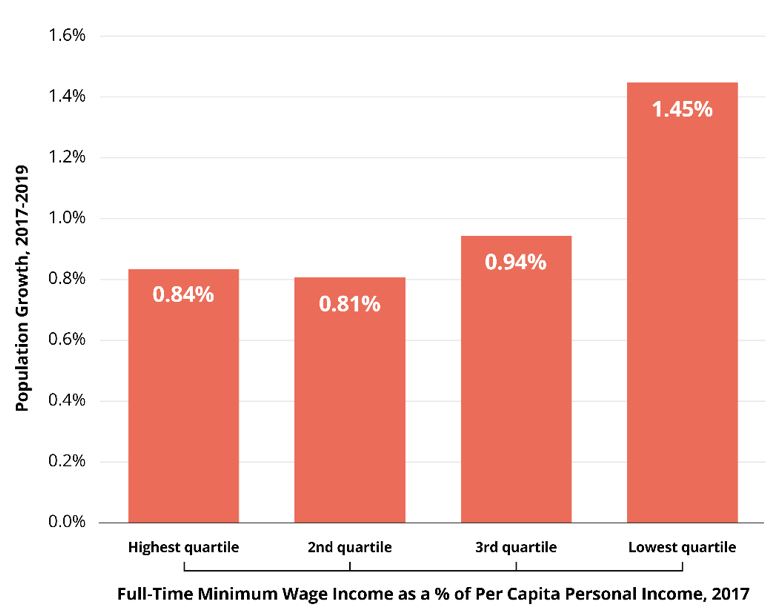 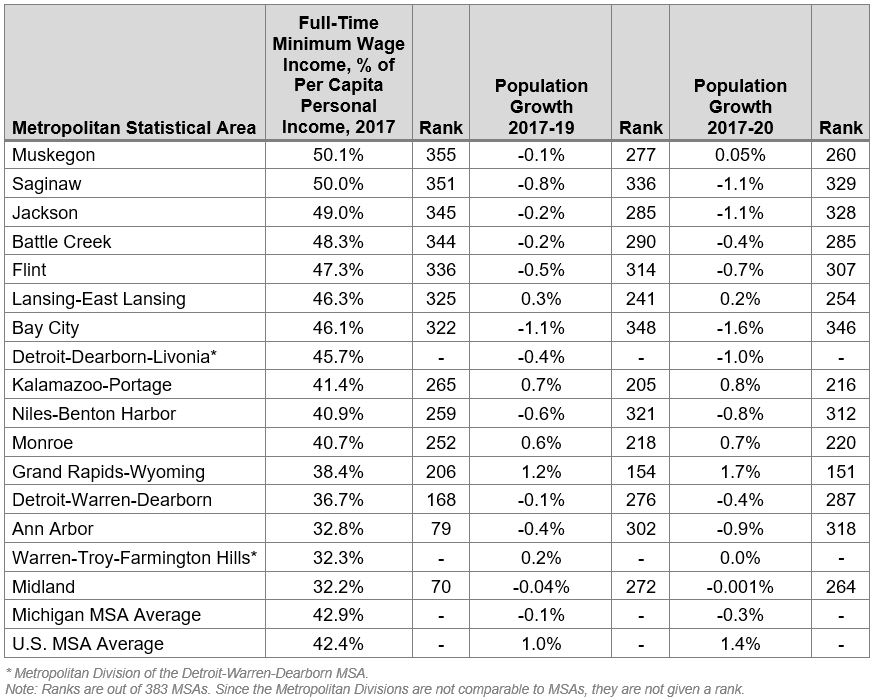 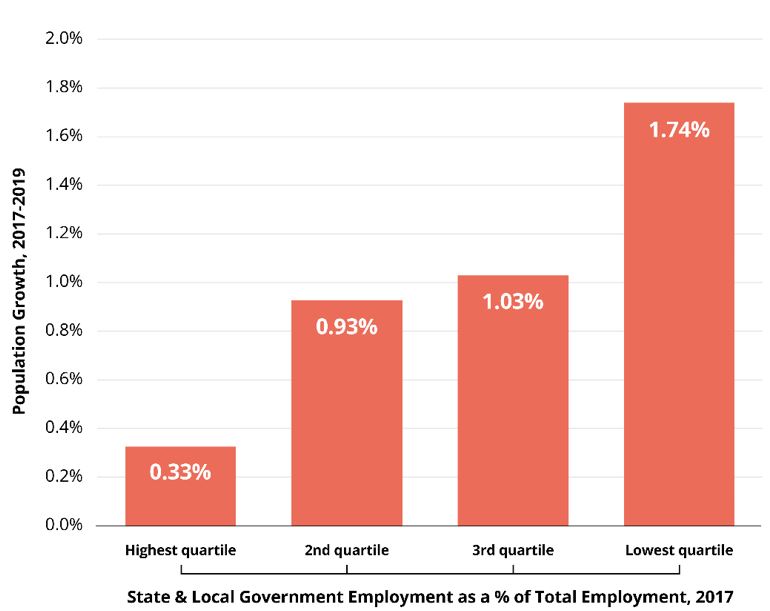 The numbers for Michigan MSAs are in the following table. As with the other variables that are used to measure labor market regulation, government employment appears negatively associated with population growth. The MSAs with larger bureaucracies tended to have less population growth. 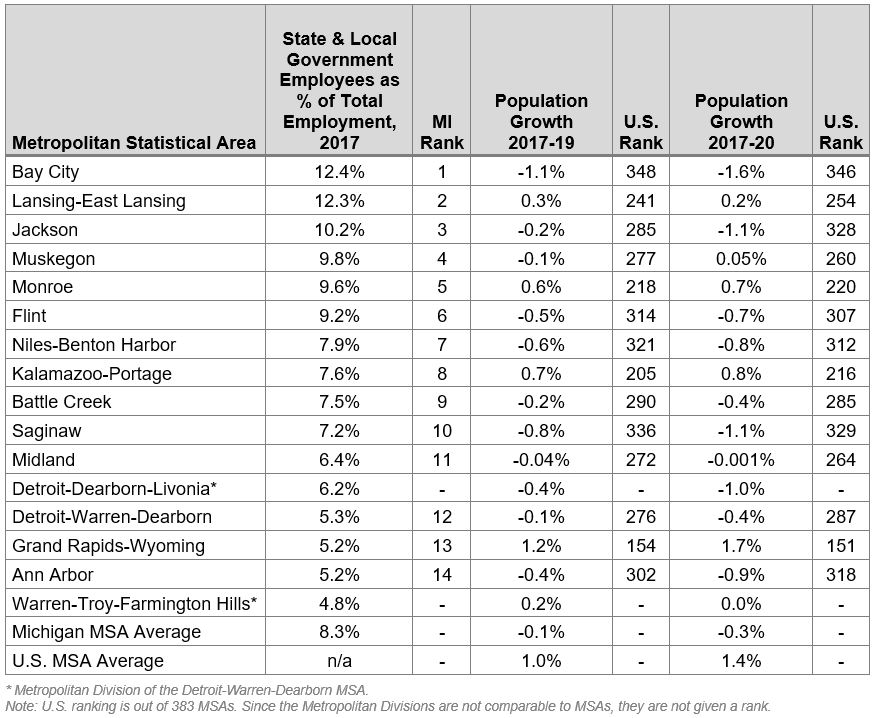