The relationship between economic freedom and employment growth in the 383 MSAs in the U.S. is even stronger than that for unemployment rates. To avoid complications from the COVID-19 pandemic, we included the growth in the number of people employed from 2017 to 2019 only. As Graphic 12 shows, the growth rate in the least-free quartile of MSAs was an anemic 1.32%. In the most-free quartile it was over 2.5 times higher at 3.54%. 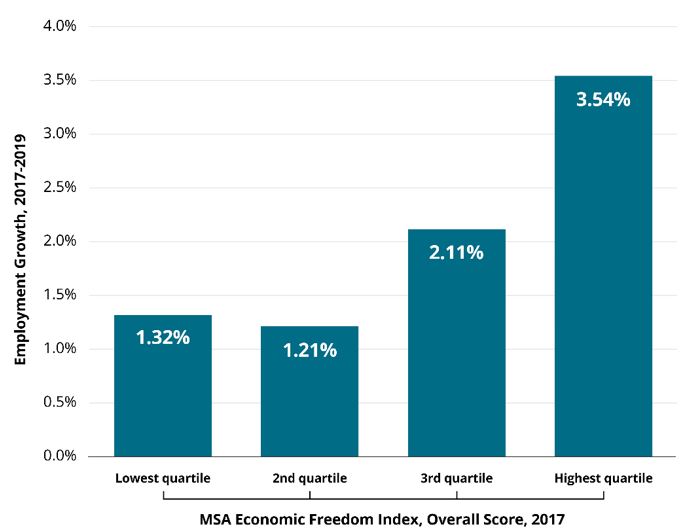 Labor market freedom was found to be particularly important for employment growth. As Graphic 13 shows, from 2017 to 2019, employment grew nearly three times faster in MSAs with the highest scores for labor market freedom compared to those with the lowest scores. This at least suggests that there is a significant preference by employers to grow in areas with the fewest burdensome labor regulations, which is consistent with the academic evidence described in our literature review. 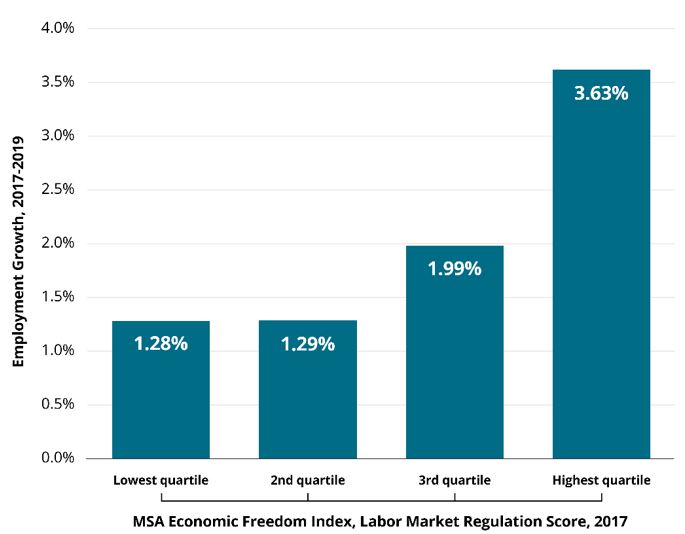 Graphic 14 shows employment growth data for each of Michigan’s 14 MSAs. Only three — Ann Arbor, Grand Rapids and Detroit — had growth that exceeded the national average from 2017 to 2019. Six of the 14 MSAs lost jobs and another three saw job growth of less than 1% over the period.

Graphic 14 also includes results for 2017-2020. Due to the pandemic and related lockdowns, the U.S. average for employment growth was negative, as all areas saw large employment declines in 2020. Michigan’s MSAs did particularly poorly. The best performer was Ann Arbor at -4.0%, which was still a 38% larger decline than the national average and the 232nd worse of the 383 MSAs for employment growth. 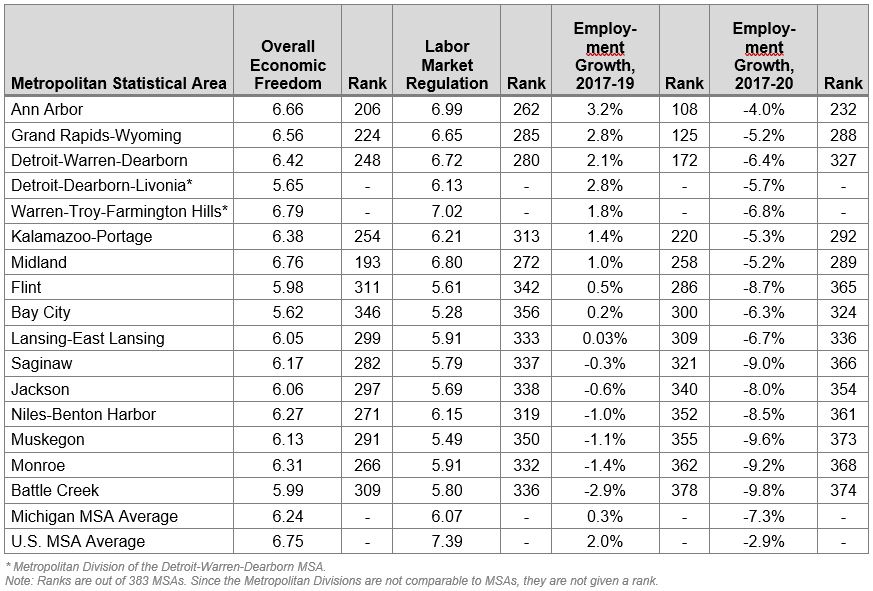 Michigan’s poor employment growth in 2020 is no coincidence, as the state inflicted some of the most severe pandemic restrictions in the nation. The U.S. Bureau of Labor Statistics indicates that the Great Lake State had the highest rate of government-mandated closures of business establishments in the country in 2020, at 32%, excepting Puerto Rico.[63] Areas with less severe restrictions tended to see less job loss.

It’s also worth mentioning that there appears to be an association between 2020 employment declines and labor market freedom scores. The MSAs that lost the most employment tended to have the most restrictive labor market regulation scores. 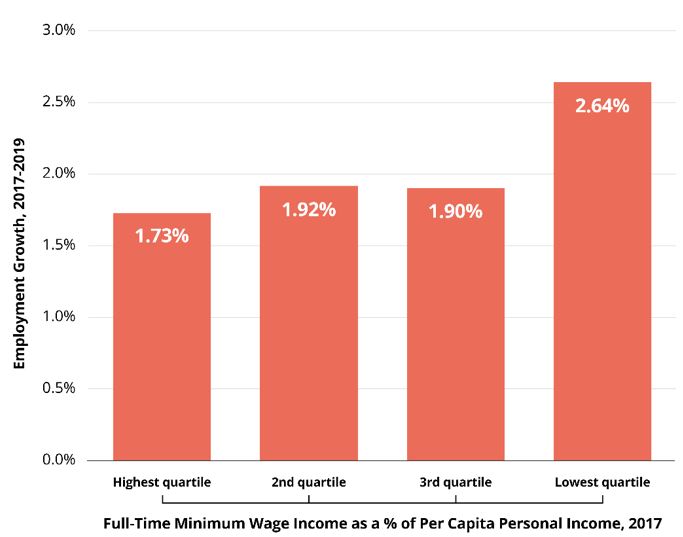 Graphic 16 shows that in half of the Michigan MSAs, the state’s minimum wage burden (again, as represented by full time income as a percentage of MSA per capita personal income) is higher than the U.S. average. Four of those seven saw an employment decline. In the other three it grew by 0.5% or less. In contrast, the four MSAs where the minimum wage is the least burdensome saw employment grow by at least 1%; three of those saw growth above the U.S. average. 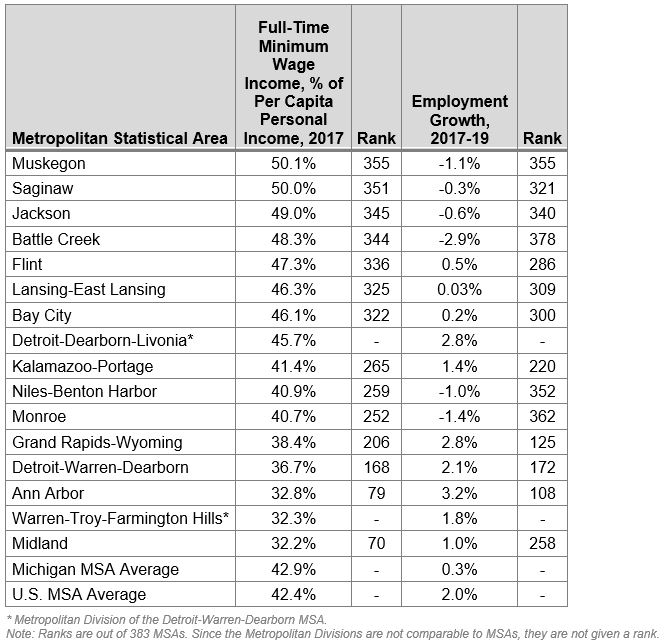 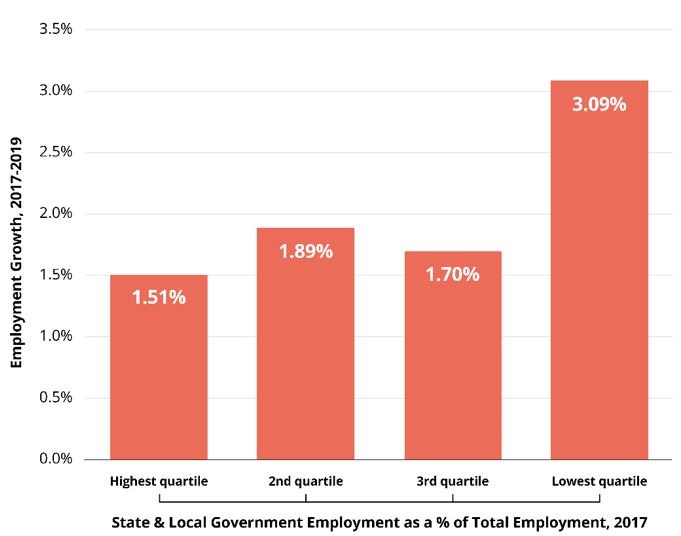 Graphic 18 shows this detailed information for each Michigan MSA. The three areas with the smallest bureaucracies as a percentage of total MSA employment — Ann Arbor, Grand Rapids and Detroit — were the only ones with employment growth from 2017 to 2019 that exceeded the national average of 2%. As the chart below it shows, there’s a strong negative correlation between the size of the bureaucracies in Michigan MSAs and subsequent employment growth. 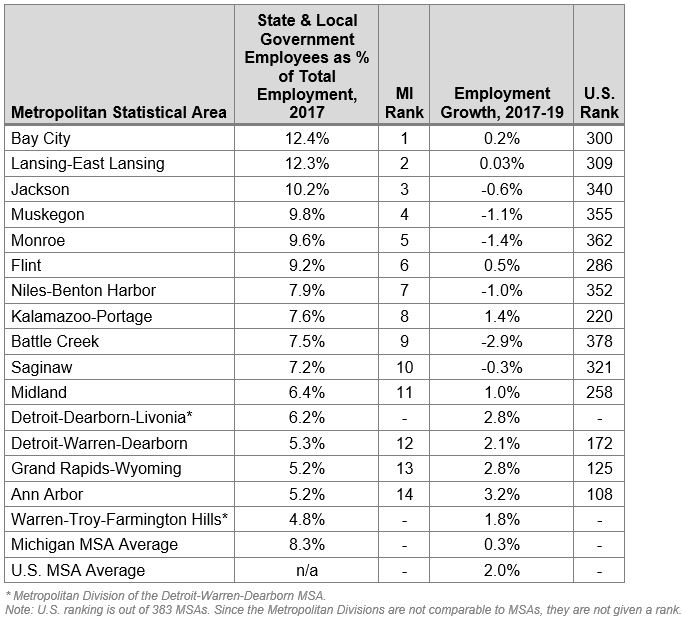 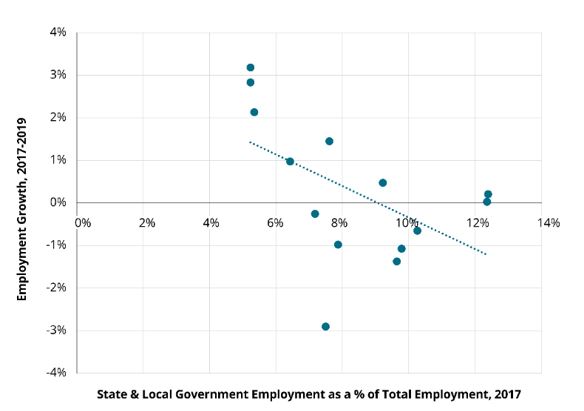