The Fraser Institute published another report, “Economic Freedom of Canada,” in 1999 before taking on the whole of North America with its “Economic Freedom of North America” report in 2002. After initially being updated every other year, the report has been updated annually since 2010. Dean Stansel, co-author of this report, has been the primary author of the last eight editions. The Fraser report includes an index score and ranking of all Canadian provinces, as well as U.S. and Mexican states.

The estimates are driven by data for each variable shown in Graphic 2. There are three main areas, each with subcomponents. The variables are standardized, so that the raw data is converted to a 0-10 scale. The most-free observation for each variable is given a value of 10, the least-free a zero. Those in between are given a score proportionate to their distance from the maximum and minimum, with lower numbers representing policies that are less free and higher numbers, more free. Each major policy area — spending, taxes and labor market freedom — is weighted equally when calculating the overall, average score.[*]

Graphic 2: Areas and Components of the Economic Freedom of North America Index 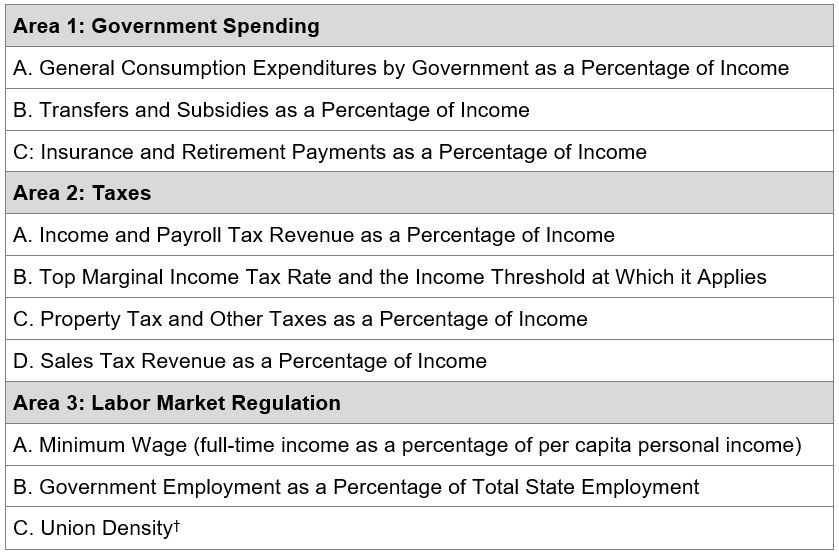 Michigan’s overall score is 5.93 out of 10 in the latest edition from 2021, which ranks it the 34th freest state in the nation.[‡] This represents a decline from 31st in the previous year’s report, but it is an improvement from its 45th rank in 2010.[8] The highest score in the U.S.-specific index, 7.83, was earned by the Live Free or Die State of New Hampshire. The lowest was earned by New York at 4.33. The most recent EFNA report uses data through 2019.

[†] This represents private union members as a percentage of total employment.