Transitioning All Other Roads to Per-Mile Charges

Converting limited-access highways first will provide breathing room for Michigan policymakers, because as each Interstate and freeway segment is converted to per-mile charges, that portion of the overall roadway system will become self-supporting, no longer depending on fuel tax revenue. Therefore, the state highway funding system will not have to draw as much on the shrinking fuel tax revenue to rebuild and maintain those costly and indispensable highways.

This breathing room will permit policymakers to learn from the successes and failures of states that might seek to convert their entire roadway system and all vehicles to MBUFs at the same time. By the time Michigan is ready to design an MBUF system for all other roads, far more information about what works and what doesn’t will be available. Moreover, 15 or 20 years from now, better technology may exist to collect, store and report miles traveled at much lower cost and with enhanced privacy protections.

Nevertheless, since the need to transition from per-gallon to per-mile is still a relatively new idea in Michigan, it would make sense for the state to take part in one of the partially federally funded MBUF pilot projects, as a growing number of other states are doing. These programs have shown what features work well, specifically by acquainting roadway users to MBUFs and addressing some of the concerns noted earlier. Here are a few of the characteristics that have proven successful:

Among the ways to record miles of travel that have been offered to participants in state pilot projects are the following:

It is important to note that satellite-based GPS does not “track” anyone. GPS signals permit the vehicle’s computer or its operator to know where the vehicle is at any given time. That information can be stored on the vehicle, but it would only be uploaded, along with total miles driven, if that is what the customer signed up for. It would operate like a GPS receiver in a smartphone, which lets the phone’s owner know his or her device location at any time but does not transmit that information to anyone else without the owner’s permission. A separate communications capability (cellular, Wi-Fi) would have to be connected to the GPS receiver in order to transmit location information to another party wirelessly.

Regardless of what reporting method is used, stringent privacy protection for that data must be ensured by statute. Adrian Moore, vice-president of the Mileage-Based User Fee Alliance, suggests these key privacy provisions:

Ideally, MBUFs would be different for miles traveled on different types of roads — with higher charges for the costly, limited-access highways and lower charges for other roads which cost far less to build and maintain. However, a system like this would require very precise data, such as that provided by GPS. An alternative system using less precise data could involve calculating the funding needed for the roads of each type and dividing that by the projected miles traveled on them in a year to arrive at an average per-mile fee that is then assessed via an odometer reading or other method.

The idea is to provide a transparent system under which motorists know who provides which set of roads they use and what the per-mile charge is for each type of road, like a utility bill that everyone is familiar with. Figure 6 provides a sample Roadway Utility Statement. This concept assumes an annual statement comparable to a property tax bill, but it would also be possible for people to pay their road bills in quarterly or monthly installments. 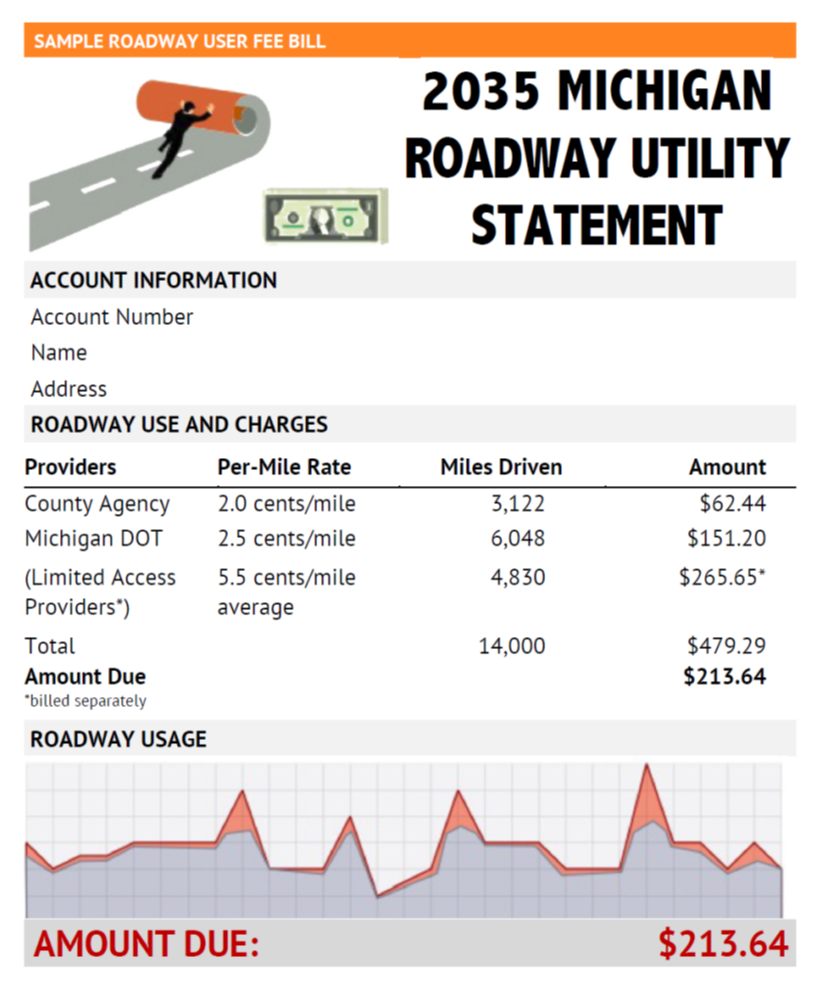 The hypothetical bill in Graphic 7 shows different per-mile rates for limited-access highways (perhaps operated by roadway utility companies franchised by the state), state highways provided by MDOT and county roads provided by a county road commission. Motorists would be billed directly by the utility companies, and the rates might differ for different limited-access highways. State-provided highways generally cost more than local roads, so MDOT’s rate depicted here is higher than that for county roads. For this hypothetical example, the bill shows total miles driven in the year, but since the utility companies are assumed to do their own billing (as do toll road utilities in Illinois, Indiana and elsewhere), the amount due on this bill is only for use of state and county roads.