Michigan’s fuel tax revenues are projected to begin a long-term decline due to improved vehicle fuel efficiency and the increasing use of electric vehicles. This is despite the recent increase in the fuel tax rate and the indexing of that rate to inflation that began in 2022.

Ed Regan, a long-time transportation analyst recently retired from CDM Smith, a global engineering and construction firm that works on transportation and public infrastructure projects, developed the projection of Michigan fuel consumption shown in Graphic 4. Regan modeled three forecast scenarios. The first is used as a reference and based on a 2021 Energy Information Administration estimate of future fuel economy. EIA projects increasing average fuel economy as older, less fuel-efficient vehicles are replaced with newer, more fuel-efficient ones between now and 2050. This projection is based on the Trump administration’s light vehicle fuel efficiency standards.

The third scenario assumes an increased use of electric vehicles over-and-above the Obama-era fuel efficiency standards. This scenario is adapted for U.S. conditions from Bloomberg New Energy Finance’s global projections.[5] This assumes that electric vehicles grow so that they comprise nearly half of all vehicles on the road by 2050. In contrast, the EIA’s projection assumes only 8% of the vehicles on the road will be electric by then. The Bloomberg forecast is more in line with the stated goals of the Biden administration and most of the auto industry.

Finally, a baseline scenario is also calculated that assumes, counterfactually, that there would be no change in average fuel efficiency between now and 2050. This hypothetical case is presented only for purposes of comparison and calculation of net impacts. There is little likelihood that there will be no increases in fuel efficiency.

Graphic 4 also includes a projection of vehicle miles of travel for Michigan, in addition to the projected annual fuel consumption under the previously described scenarios. After several years of recovery from depressed travel levels in 2020 due to COVID-19, Michigan VMT is assumed to increase by less than 1% a year through 2050.

If there were no change in average mpg (the red line), annual fuel consumption would rise from five billion gallons now to about seven billion in 2050. Under the EIA reference case (the green line), annual fuel use remains largely unchanged between now and 2050, with only a slight increase in 2022 and 2023 as VMT recovers from the pandemic. This is consistent with EIA announcements related to their 2021 Annual Energy Outlook report, noting that the 2019 level of fuel sales would likely never again be achieved in the United States, at least not through 2050.[6] 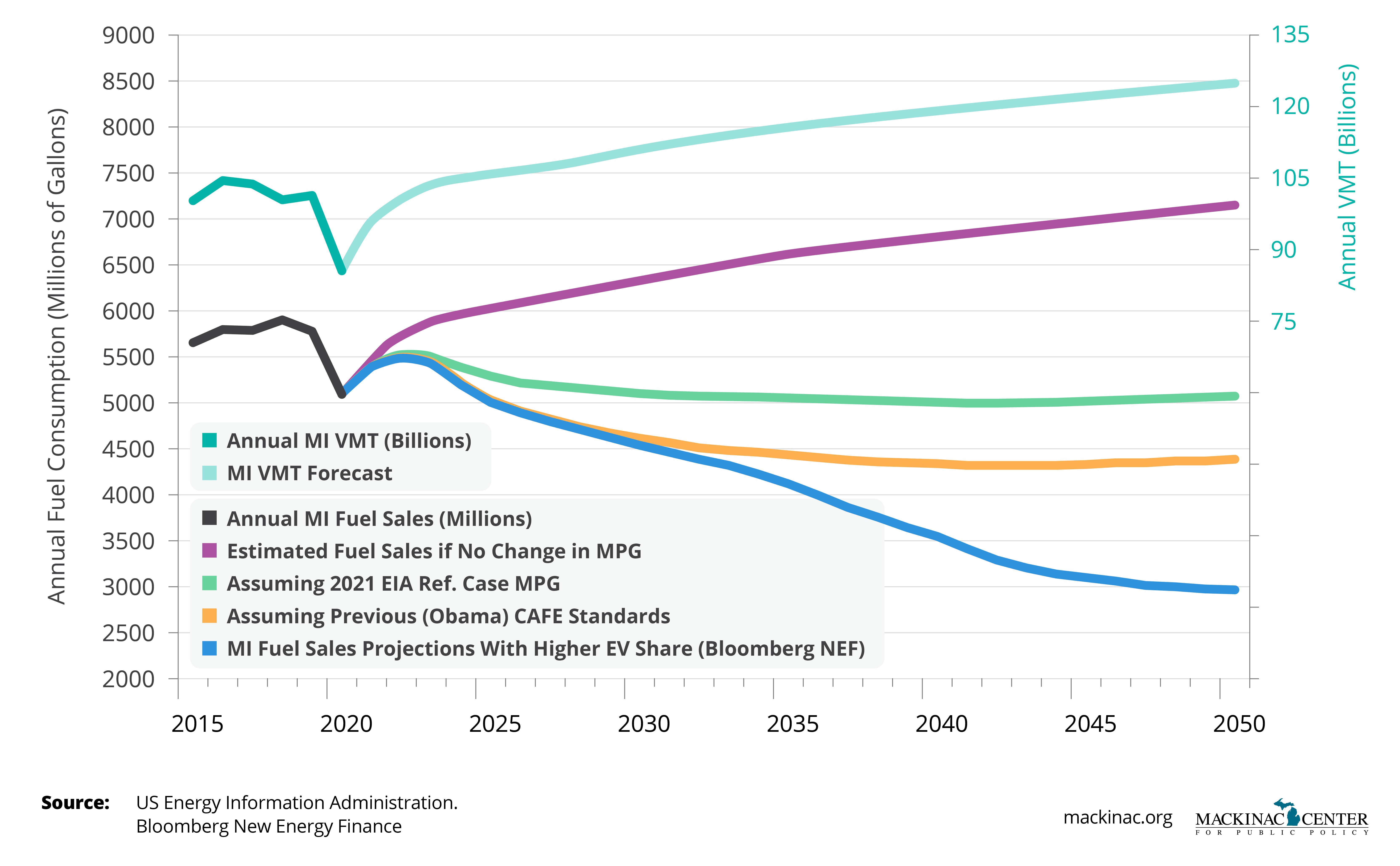 Michigan’s fuel tax rates are now adjusted annually based on inflation. The 2022 rate was increased by 3.3%, to $0.272 per gallon. Our projections for future years assume further inflationary adjustments of 3.1% in 2023, with annual increases then gradually declining to 2.1% per year by 2025. Annual inflation increases in 2026 and beyond are conservatively assumed to average 2% per year. Actual inflation has many ups and downs, but there is no way to simulate those in a 30-year projection. The long-term trend appears to be for modest annual inflation.

The vertical arrows in Graphic 5 show the annual difference in fuel tax revenue under this scenario compared to if there were no change in fuel efficiency, at five-year intervals. Especially for the Bloomberg, high-EV projection, these are worst-case estimates compared with the hypothetical case of overall fuel efficiency remaining unchanged and no growth in EV market share. The actual difference in fuel tax revenue will fall somewhere within the range marked by these arrows. The arrows diverge rather quickly, likely due to the reinstatement of the more aggressive Obama-era CAFE standards. 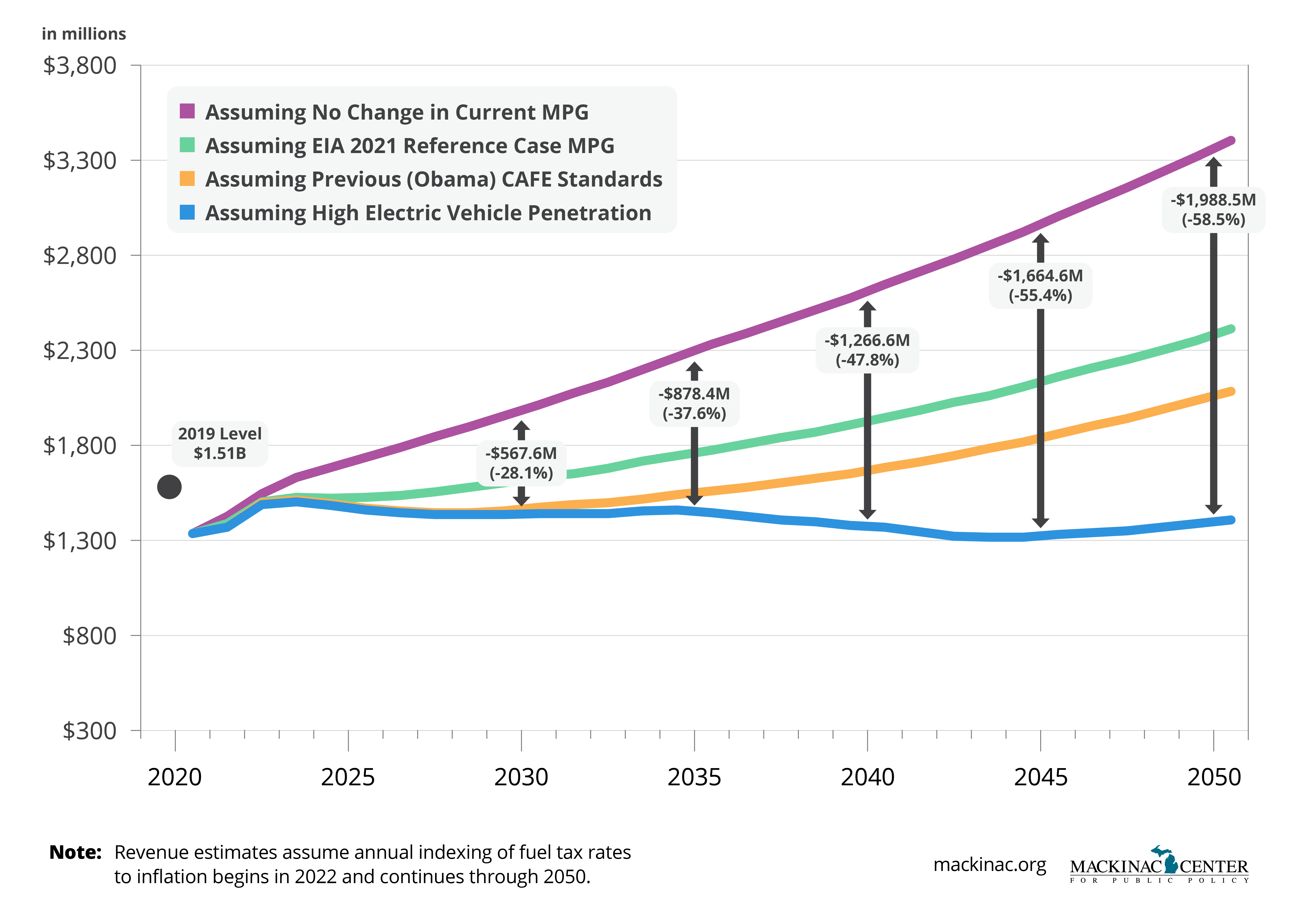 Raising fuel tax rates that high would likely be difficult politically. In addition, it would leave electric vehicle drivers, by 2050 accounting for nearly 50% of VMT, not paying their share of the cost of maintaining Michigan’s roads. Attempting to remedy this, Michigan introduced an increased electric vehicle registration fee. Beginning in 2017, it established supplemental rates for four categories of EVs:

The rate is recomputed each year based on the new indexed fuel tax rates, with the full-battery rates increasing by $5.00 for each one cent increase in the fuel tax rate. The plug-in hybrid rate increased half as much, by $2.50. This resulted in an annual rate of $135 for light full-battery electrics and $47.50 for light plug-in hybrids in 2021. The rate will continue to increase in proportion to indexed fuel tax hikes in future years.[7]

While the supplemental EV fee is well-designed, its revenues will only partly offset the impact on fuel tax revenue from fuel efficiency gains and increased EV use. The $900 million from EV fees in 2050 amounts to slightly less than half the total difference in projected fuel tax revenue if policymakers aim to hold road funding harmless from declining fuel sales.

Equally important, the EV fee structure does not reflect actual vehicle miles traveled. If EV drivers use the roads more, the registration fees they pay, even with indexed increases, are unlikely to keep pace with the corresponding wear that these vehicles cause Michigan roads. This is further removed from the basic users pay/users benefit principle of the fuel tax — the more a vehicle travels, the more it pays toward the cost of the roadway system.