The funds to maintain and support Michigan’s roads heavily depend on motor fuel taxes on gasoline and diesel, as well as vehicle registration fees. This policy brief focuses on gasoline and diesel taxes. The per-gallon fuel tax has a lengthy history both in Michigan and across the United States. First implemented in Oregon in 1919, similar taxes were adopted by every state by 1932 as automobiles became ubiquitous.[*] In fact, the formula that dictates how Michigan fuel tax and vehicle registration fee revenue is divided between state trunkline roads (those designated with an “I,” “US,” or “M”), county roads, and city and village roads was established more than 70 years ago.[†] Public Act 51 of 1951 predates the federal Highway Trust Fund, created in 1956 to distribute federal fuel tax revenues to pay for building the Interstate Highway System, and later extended to all roads eligible for federal aid.

Michigan’s inflation-adjusted annual revenues from fuel taxes and vehicle registration fees plateaued from the late 1990s through 2004 and declined after 2004 for about 10 consecutive years. They began slowly increasing around 2013 and then, following a 2015 fuel tax hike that took effect in 2017, larger annual increases began. Graphic 1 shows the historic trends of Michigan’s transportation revenues. 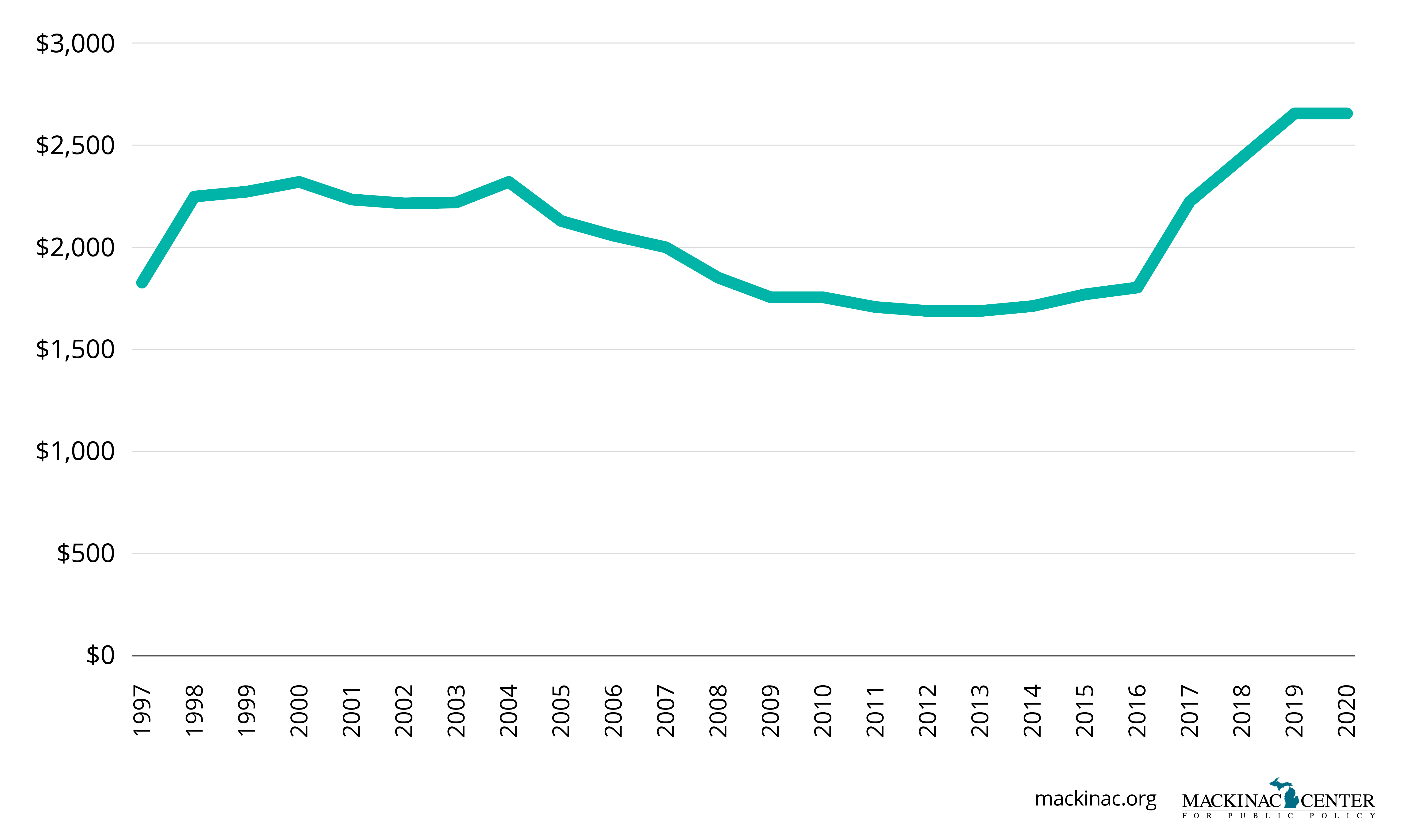 Source: Schedule A of the “Act 51 Annual Report for 2020,” Michigan Department of Transportation.

The reasons for the temporary decline in annual transportation revenue shown in Graphic 1 are three-fold. First, vehicle miles of travel, or VMT, peaked around the year 2007 in Michigan. They began declining as the Great Recession began and had yet to recover prior to the larger decline during the COVID-19 pandemic. Fewer miles driven means less gasoline purchased and thus less fuel tax paid. Graphic 2 shows historical VMT trends. 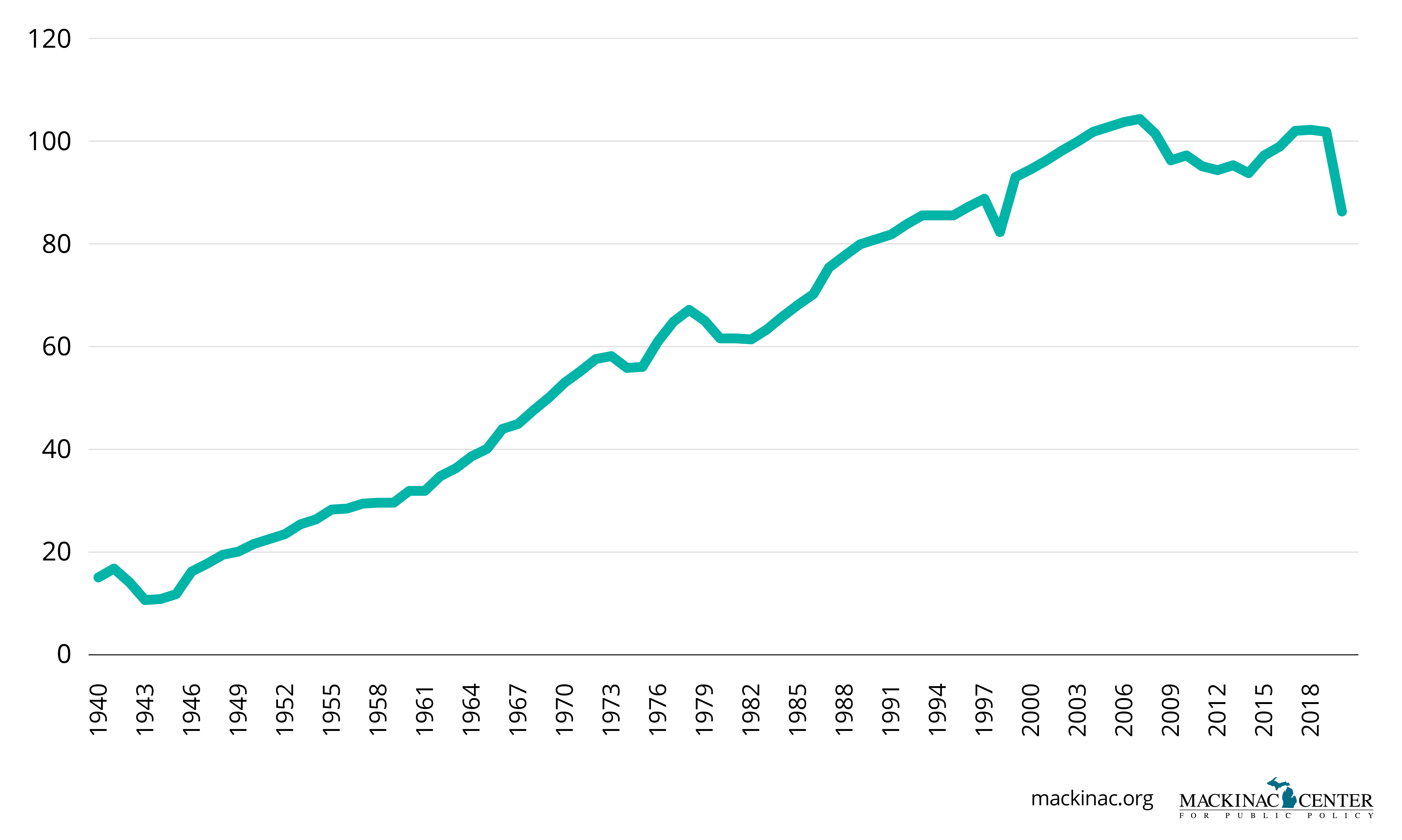 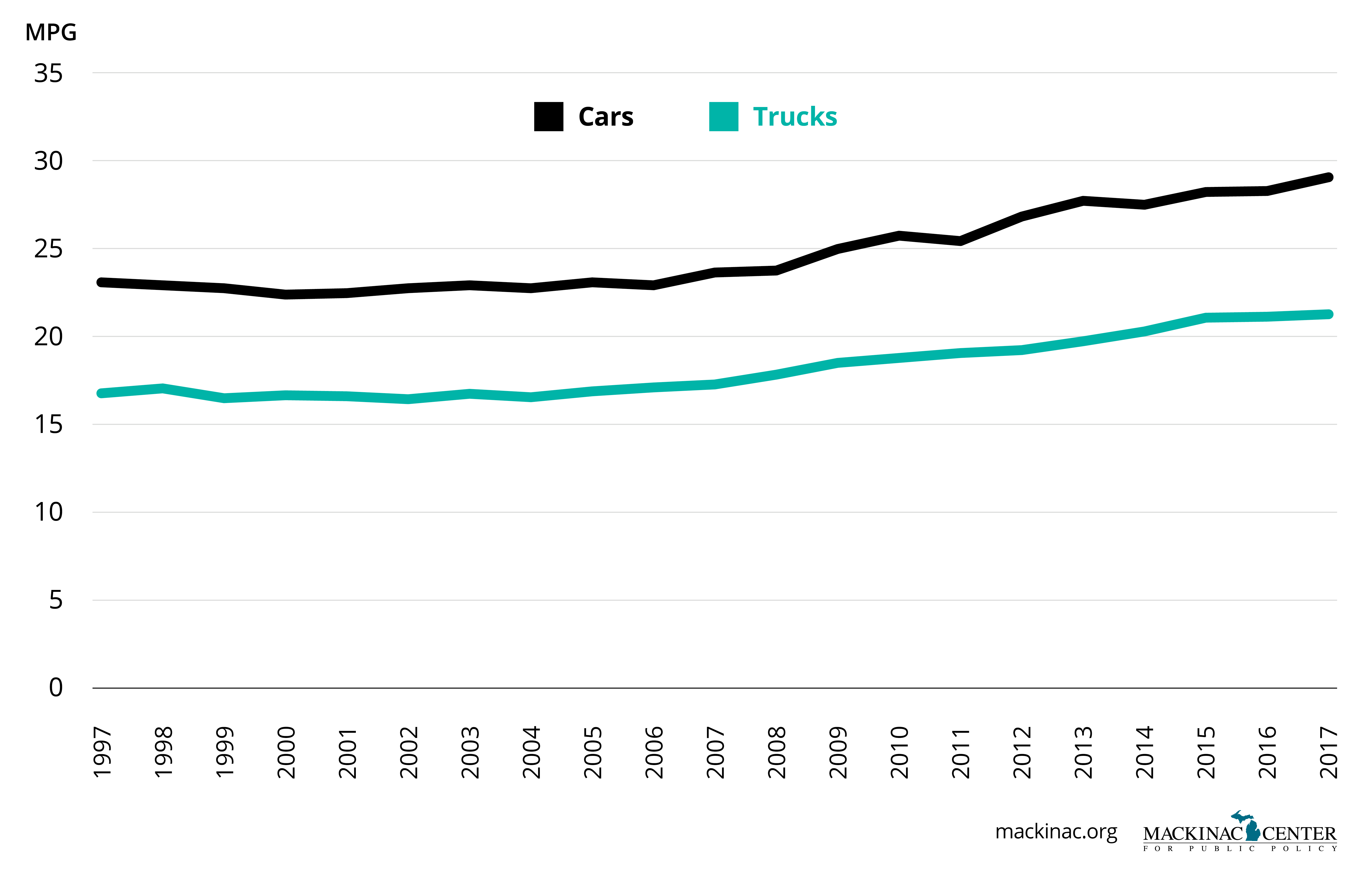 The fuel tax has traditionally been a benefits tax based on the users-pay/users-benefit principle, meaning the tax is paid in proportion to the benefits received. Someone who drives a lot receives more benefit from the roads than someone who drives only a little. The person who logs many miles also causes more wear to roads. Because taxes that fund these roads are levied on fuel, people who drive more will pay more fuel taxes, which functions as a type of user fee. That’s the users pay/users-benefit principle in action.

However, the user fee aspect of the gas tax will begin breaking down due to continued fuel efficiency improvements and the shift toward electric vehicles, despite the recent fuel tax increase and indexing to inflation.

President Biden signed an executive order on Jan. 20, 2021, to establish “ambitious, job-creating fuel economy standards.” The order reverts to the Obama administration’s requirement of a new-vehicle, fleetwide 55 mpg average fuel efficiency. The Trump administration had revised this target to a 40 mpg average by 2026.[1]

There is also a push by most major car companies to substantially shift vehicle production to electric vehicles. For example, General Motors has a goal of an “all-electric future” by 2035.[2] An electric vehicle does not use gasoline, so its owner will not pay fuel taxes for using the roads, avoiding the users-pay/users-benefit principle of public road use. The more prevalent electric vehicles become, the dimmer the prospect of fuel taxes generating sufficient revenue to maintain and repair roads in Michigan.

This is not a new problem: It was studied by a special committee of the Transportation Research Board of the National Academy of Sciences in 2005. This committee concluded that fuel taxes would not be a viable, long-term road funding mechanism in the 21st century.[3] Congress subsequently appointed a national commission to examine how roads should be funded in the future. The commission considered several alternatives and concluded that payment for the roads should be made in proportion to use, and the best way for road users to pay proportionately is to charge users a fee per mile driven. Importantly, it recommended that these new mileage-based user fees, or MBUFs, be a replacement for fuel taxes, not piled on top of them.[4]

This policy brief discusses how Michigan policymakers might address this looming road funding problem. First, it looks at the likely shrinkage of fuel tax revenues over the next 30 years, despite the recent fuel tax hike and introduction of automatic, inflation-based rate increases. Second, it discusses how an MBUF can remedy this deficiency by serving as a replacement for current fuel taxes. This policy brief also discusses common issues raised about MBUFs and shifting away from fuel taxes. Finally, this report proposes a framework for how such a system could be deployed in Michigan.

[3] “The Fuel Tax and Alternatives for Transportation Funding, Special Report 285,” (Transportation Research Board of the National Academies, 2006), https://perma.cc/M7VT-8GJQ.