We consider an ESA program funded by tax credits from taxpayer donations to scholarship organizations that award ESAs to eligible students. The program analyzed here includes major elements from a tax credit-funded, ESA program introduced in House Bills 5404 and 5405, legislation that would create the Michigan Student Opportunity Scholarship Program. For simplicity, the analysis does not reflect all the components of the bill that could affect the program’s fiscal impact.[*]

Students eligible for the program must satisfy at least one of the following requirements:

Because there is no requirement for prior-enrollment in public school, the analysis generates fiscal impact estimates under switcher-rate assumptions of 60% and 90%.[‡]

The tax credit rate is 100%, meaning individuals and businesses receive a dollar-for-dollar income tax credit for the amount donated. Total tax credits are limited to $500 million each year. The program allows up to 10% of scholarship-granting organizations’ funds to be used for administrative costs.

Under current state law, about three-quarters of these tax credits would be applied against the state’s general fund and the rest applied against school aid revenue.[32] If all the tax credits were issued, that would represent about $119 million less in revenue for the School Aid Fund, an amount less than 1% of the fund’s annual intake. 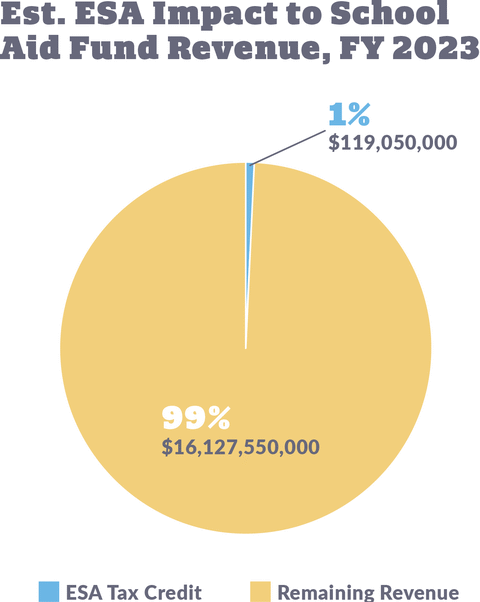 Scholarships are worth up to 90% of the state’s minimum foundation allowance, or $7,830 (= 0.9 x $8,700). Students who have a disability and students from households with income below the income eligibility criteria for the federal FRPL program would receive this maximum amount. Students from households with income above the FRPL threshold but below 200% of this threshold would receive a lesser ESA amount. This amount would be determined by a sliding scale based on household income, with the smallest scholarship equal to five-eighths of the maximum scholarship, or 90% of the foundation allowance. This would translate to a maximum ESA amount of $4,894 (= .625 X $7,830) for students with household income that is 200% of the FRPL threshold.

The analysis generates estimates under two average ESA amounts: $6,000 and $4,000. Because only students with disabilities and those who qualify for the FRPL program are eligible to receive the maximum amount, the average ESA amount will necessarily be less than $7,830. Additionally, as is typical of such programs operating in other states, scholarship-granting organizations would have the flexibility to provide students with scholarship amounts below the state-mandated caps, enabling them to provide aid to a greater number of students.[§]

The program has a limit on tax credit disbursements equal to $500 million. The analysis assumes that the credit limit is reached, i.e., taxpayers donate $500 million during the program’s first year.[**] Assuming a 10% withholding of funds for administrative costs, $450 million in funds would be available for ESA distributions. If the average ESA amount is $6,000, $450 million would fund 75,000 ESA accounts for students, or 9% of the eligible student population. If the average amount is $4,000, 112,500 ESA accounts could be established.[††]

Table 1 below summarizes estimates under these scenarios: switcher rates of 60% and 90%, and average ESA amounts of $6,000 and $4,000. We first walk through our most cautious results, shown in the first column of Table 1 and labeled Scenario 1, which corresponds to an average ESA amount of $6,000 and a 60% switcher rate. Under this scenario, of the 75,000 ESA students, 45,000 would be switchers.

[*] For example, under the proposed bill, students would be able to participate in the ESA program and simultaneously enroll in public schools. The ESA amount for these students would be significantly less than students would receive if they enrolled in nonpublic settings (equal to $500 or $1,100 depending on whether the student has a disability). This component would have the effect of increasing program costs. However, because there is no other choice program currently in operation with a similar feature to inform the present analysis, we do not include it in the analysis. This analysis focuses solely on the fiscal impact of students using the program to enroll in private schools.

[‡] The 60% assumption is based on prior survey research by EdChoice which tends to find that, on average, 40% of respondents indicate private school as their most preferred setting for their children when asked, “If it were your decision and you could select any type of school, and financial costs and transportation were of no concern, what type of school would you select in order to obtain the best education for your child?” For example, 39% of respondents in an Iowa survey indicated private school for their choice. This would imply a nonswitcher rate of about 40%. This switcher rate is likely very cautious given that scholarship organizations and private schools tend to have missions oriented around maximizing student participation in choice programs. That is, scholarship organizations are likely driven to “spread the wealth” among as many students as possible. Andrew D. Catt, Michael Shaw, John Kristof, and Trish Wilger, “Iowa K–12 & School Choice Survey” (EdChoice and Iowa Alliance for Choice in Education, January 2021), https://perma.cc/R2UF-XQ63.

The 90% switcher rate is from the body of empirical evidence on private school voucher programs, based on random assignment, which provides information on switcher rates. The programs studied were oversubscribed and held lotteries to determine if applicants received a voucher or not. In these studies, researchers observed the percentage of families who lost a lottery and enrolled their children in public schools after applying to a choice program. Thus, these students would have attended a private school only if they had received a scholarship from a school choice program. Lueken summarized this body of research from six different school choice programs across the nation. He identified 27 estimates of switcher rates from this research and estimated that the median switcher rate directly observed among students who applied to voucher programs but lost a lottery was 90%. Martin F. Lueken, “The Fiscal Impact of K-12 Educational Choice: Using Random Assignment Studies of Private School Choice Programs to Infer Student Switcher Rates” (Journal of School Choice, March 4, 2020), vol. 15, 2: 170-193.

[§] The $4,000 ESA amount is close to the weighted average for scholarship amounts awarded by SGOs in other states with tax-credit scholarship programs, or $4,026. See “School Choice in America Dashboard” (EdChoice, 2022), https://perma.cc/8GQW-V9AN. The $6,000 amount exceeds the average scholarship amount for nearly all existing tax-credit scholarship programs with reportable data and could be viewed as an upper bound on the potential per-pupil cost of the program. The number of total ESAs and associated fiscal impact could be altered by the number of current public school students who receive supplemental ESAs.

[**] If tax credit disbursements equal $250 million, or half of the limit amount, then the fiscal effects estimates will also be half, under the same set of assumptions.

[††] Based on household income data from the U.S. Census Bureau, we estimate that 54% of K-12 students in the state come from households with income below 200% of the FRPL eligibility limit, or more than 821,000 students. U.S. Census Bureau, “Family Type by Presence of Own Children Under 18 Years by Family Income in the Past 12 months (In 2019 Inflation-Adjusted Dollars),” 2019 American Community Survey 1-Year Estimates.