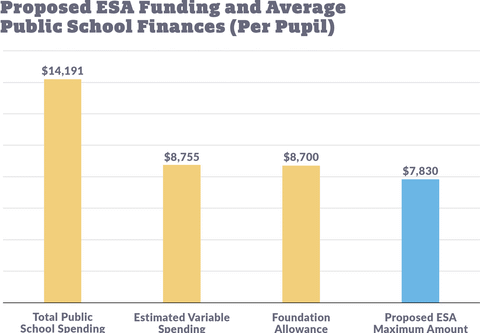 To gauge the potential fiscal impact on school districts, we first estimate short-run variable costs for public schools. We use a variant of Scafidi’s method by taking a more cautious approach. That is, we consider three of the five categorical expenditures that Scafidi identified as variable in the short run: instruction, pupil support services, and instructional staff support services.[‡] Using school finance data from the U.S. Department of Education, we estimate that 61.7% of total per-pupil expenditures is variable in the short run, or $8,755 per student. This amount is slightly greater than the per-pupil foundation allowance amount of $8,700. Therefore, if students leave a district via a choice program, the district on average has about the same amount of variable cost burden relief with which to offset its revenue reduction of $8,700.

Finally, let’s consider the following example where the average cost to fund an ESA is $7,830, which is 90% of the foundation allowance and the maximum amount the state would pay. Compare this to the foundation allowance, whose maximum cost to the state is $8,700 per public school student. As long as the switcher rate for the ESA program is greater than 90%, i.e., more than 90% of ESA students would enroll in public schools without ESAs available, then the program will produce net fiscal benefits for the state.

To recap: Public school districts would not automatically suffer fiscal harm if students left to participate in an ESA program like the one proposed in Michigan. If the reduction in revenue a district experiences from enrolling one fewer student is less than the short-run variable costs spent per student, the district will not be worse off financially. This means schools could end up with more resources available for each student still enrolled. This is true, in fact, no matter the reason for a student leaving — whether for a new ESA program, a public charter school or to enroll in a neighboring district through Schools of Choice.

[*] Author’s calculation based on data from the 2020-21 National Public Education Financial Survey from the National Center for Education Statistics and the total “Fall 2020 Headcount” in Historical Student Enrollment Counts Data from the Center for Educational Performance and Information. The figure excludes expenditures and enrollments attributed to the state’s 56 intermediate school districts.

[†] The foundation allowance amount for 42 of the 830 public school district and charter schools in Michigan is greater than $8,700. Thus, when a student leaves these districts, the decrease in foundation aid for those districts and public charter schools will exceed $8,700. “2021-2022 School District Foundation Amounts” (Michigan Department of Education), https://perma.cc/4VP5-DLLW.

[‡] By excluding these other two categories, this calculation provides a more conservative estimate of school districts’ variable costs. In fiscal 2021, Michigan school districts and charter schools reported $588,344,559 spent on food services and $0 spent on enterprise operations, a combined $423 per pupil. Including this spending would increase the variable costs calculation to $9,178 per student, or 64.7% of total expenditures.