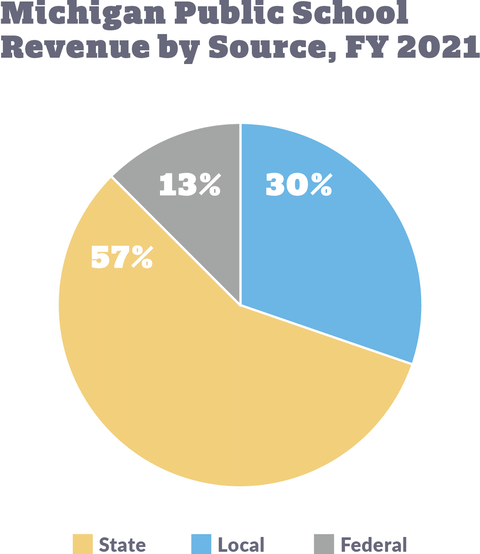 To visualize how the foundation allowance works, think of a jar for each district. The district’s enrollment, characteristics of students and the size of the foundation allowance set by the state determine the size of the jar. The state calculates how much local revenue the district can raise via property taxes and puts that in the jar. Then the state calculates what is needed from state sources to fill the rest of the jar. When enrollment grows, all else equal, the size of the jar increases, and state funds fill the newly created empty space. When enrollment decreases, holding constant all other factors, the jar shrinks, and the state funds once needed for that district are used for a different district or program. The amount of local revenue in the jar does not change as enrollment changes. Nearly all the variability happens by state policy and with state funds.

The state also allows districts with declining enrollment to receive 10% of their per-pupil funding based on the previous year’s spring count, which gives a district some small aid for fixed costs.[†] Further, a small number of districts are allowed to levy additional property tax based on a 1994 agreement to prevent them from enduring funding cuts when a new school finance system, known as Proposal A, was adopted.[29] Some small, rural districts can average their pupil counts for the previous three years for determining their enrollment-based funding levels, reducing the impact of enrollment declines.[30] These different mechanisms function to soften the hit from reduced funding created by a decrease in enrollment.

[*] Districts also receive supplemental funds for English-language learners, students with special needs, and small and remote districts. How these supplemental funds are distributed varies. For example, districts receive a flat amount for each ELL student (ranging from $105 to $935 per ELL student), and special education is funded via reimbursement for special education expenses. “FundEd: State Policy Analysis, A Detailed Look at Each State's Funding Policies: Michigan” (EdBuild, 2022), https://perma.cc/SW8D-9NSA.

[†] To help cope with the pandemic, the state passed a new declining enrollment provision which allowed districts during the 2020-21 school year to receive revenue based on 75% of the prior year’s enrollment count and 25% of the current year’s enrollment count. Since then, funding for districts has returned to being based on 10% of the prior year’s spring enrollment and 90% of the current year’s fall enrollment. Hannah Jarmolowski and Marguerite Roza, “Proceed With Caution: With Enrollment Drops, States Are Looking to Hold District Budgets Harmless” (Edunomics Lab, Georgetown University, February 2021), https://perma.cc/9PR9-GAUR.