The science on climate change is settled. There is nothing more to discuss about it.

Actually, there is a healthy and ongoing discourse over the science of global climate change. In fact, it’s well past time that we have a full and independent review of the climate science that is driving energy and environmental policy.

But if it was true that the “science is settled,” then we should not need to invest any more limited tax dollars into climate research. We would do far better to invest dollars into adaptation measures or efforts that address other environmental and health issues.

Climate models show us that the world is warming beyond our worst fears.

Climate models are historically inaccurate, as shown by two scientists at the University of Alabama in Huntsville. Dr. Roy Spencer is principal research scientist and his colleague Dr. John Christy is a distinguished professor of atmospheric science and the director of the Earth System Science Center at the university. Spencer and Christy have compared the findings of more than 100 climate models with the real-world measurements of temperatures. The models, Spencer and Christy have concluded, consistently “run hot,” or overpredict warming.

Renewable energy - primarily solar and wind - can replace nuclear and fossil fuels at an affordable cost.

The prices we pay for renewable energy are coming down. But there are several costs that wind and solar energy impose on the system. Those other costs are often overlooked, but wherever wind and solar make up more than a few percentage points of the electrical supply in an area, electricity prices jump rapidly.

Overall electricity prices go up because wind and solar energy are temporary and unpredictable sources of energy — the sun doesn’t shine and the wind doesn’t blow 24/7. In fact, wind and solar have the ability to produce electricity only about 35% of the time and 20% of the time, respectively, something known as their “capacity factor.” When they don’t produce electricity, we must use more reliable sources of energy — natural gas, nuclear, hydroelectric, or coal — to provide the always-on, or “baseload,” electricity that we need.

Additionally, when we build new renewable generation facilities, we have to build new transmission lines to transport electricity to and from those turbines and solar arrays. We also are beginning to build battery backups that add to the costs as well. When all of these are added together, the actual price of renewable energy climbs significantly. For example, residential electricity prices in California, which relies heavily on solar, were over $0.20 per kWh, in 2020, a 55% increase over the national average.

Some states just don’t have very good wind or solar resources. For example, according to the National Renewable Energy Labs, Michigan has some of the lowest global horizontal solar irradiance levels in the country. That means Michigan’s geography and location, as well as its reliably cloudy weather, impact on the amount and intensity of the sun that shines here. So it takes more solar panels to produce the same amount of energy in Michigan than it does in California or Arizona. Alternately, a single solar panel in Michigan will produce less electricity, in a certain period of time, than one in more sunny states.

When it comes to wind energy, lower average wind speeds in Michigan mean that wind is one of the least reliable and least efficient energy options for that state.

Climate change is an “existential crisis“ or an “existential threat.“ We must drastically change our energy sources and cut our green- house gas emissions in the next ten to twelve years to avoid going beyond a climate “tipping point.“

Respected climate scientists like Roy Spencer and John Christy have a different view. Spencer has bluntly stated: “There is no climate crisis. Even if all the warming we’ve seen in any observational data set is due to increasing CO2 (carbon dioxide), which I don’t believe it is, it’s probably too small for any person to feel in their lifetime.”

Even the UN’s Intergovernmental Panel on Climate Change, or the IPCC, recognizes in its “Special Report: Global Warming of 1.5°C” that “Under the no-policy baseline scenario, temperature rises by 3.66°C by 2100, resulting in a global gross domestic product (GDP) loss of 2.6% (5–95% percentile range 0.5– 8.2%).” The IPCC is saying here that the extreme, almost unimaginably bad, worst-case scenario — arising from their “no-policy baseline scenario” — could lead to an 8.2% decrease in global GDP in the year 2100. While that would certainly mean an economic impact, it isn’t an “end of the world” scenario.

But what about the polar bears? Aren’t they going to go extinct from the effects of global warming?

Actually, polar bears are doing very well. The estimated population of the bears is about 39,000. This is about 4 to 6 times higher than the numbers that were estimated to exist in the 1960s.

A September 2018 blog post by University of Alabama’s Roy Spencer reported that “the average intensity of [the] 36 most costly storms has actually decreased.” He also pointed out that, when considering all major hurricanes (Cat 3+), “there’s no statistically significant trend … and certainly a downward trend since the 1940s.”

Energy sources like wind and solar can produce millions of jobs to replace the lost jobs in the fossil fuel and nuclear industries.

Green jobs are the antithesis of efficiency. If our green energy goal were to create the most jobs, we could hire millions of people to ride stationary bikes or run on treadmills to generate electricity. That might get the job done, but our electricity would be incredibly expensive. When it comes to energy, we should seek the biggest gain from the least amount of resources. We should measure energy by its output, not the size of its payroll.

We should reduce our impact on the climate by buying locally grown food and produce.

The amount of energy required to produce a crop depends on many factors, including soil condition or climate. In short, it may take you much more energy to produce a certain crop than it would require for someone at a distance to produce it and then ship it to you. As Pierre Desrochers and Hiroko Shimizu wrote in “The Locavore’s Dilemma: In Praise of the 10,000-mile Diet,” eating only locally grown food will result in “much more significant environmental damage” than the alternative.

We must abandon fossil fuels and nuclear power to ensure a safe natural environment for human life.

Buried in this argument is the assumption that the natural world is safe, and that, if it is unsafe, it is only because humans made it that way. But the natural world is, in many ways, unsafe for human life — think, for example, of winter in the northern United States. Humans make intelligent use of fossil fuels to create cheap and affordable energy, which is required to make much of the earth habitable for people.

William Nordhaus, the winner of the 2018 Nobel Prize in economics for his work on climate modeling, says our target should be 3.5 degrees C or less. Nordhaus argues that the 1.5 C target is simply “infeasible,” as the cost of mitigating potential climate damage would be 10 times higher than the benefit.
Previous Section | Next Section 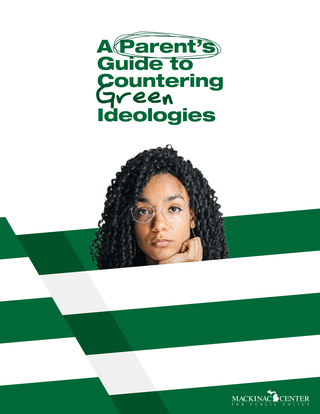