Blessed to Give Back

Playing bridge in Islamabad, Bogota and Moscow. Dancing with a North Korean army general in a city park. Ellie Fox’s travels have taken her to every country in the world, to every continent, to all 50 states, and she has her ninth passport.

“I’m blessed in so many ways” said the Fort Myers, Florida, resident and Mackinac Center donor.

Ellie is a member of the Travelers Century Club, an organization for people who have visited at least 100 countries. Of the club’s list of 330 countries and territories in the world, she has visited 320. The ones remaining are mostly islands, she says.

Her travels began as a child when her father’s military service took the family to Austria and then Germany, where Ellie graduated third in her class at Heidelberg American High School in 1955.

She earned her Associate of Arts degree at City College of San Francisco and her Bachelor of Business Administration degree at the University of Oklahoma, where she met her husband, Edward L. Fox, on a blind date.

Ellie launched her own real estate company in 1980 and was voted Realtor of the Year in 1984.

Ellie is an avid duplicate bridge player — and a Ruby Life Master — and has played bridge in 13 countries outside the US.

Ellie donates to 61 charities and organizations every month, including the Mackinac Center. She is grateful to be able to make a difference for the causes she cares about, such as the Dubin Alzheimer’s Resource Center, Florida Repertory Theatre, Habitat for Humanity, ASPCA, the Southwest Florida Symphony, St. Jude Children’sResearch Hospital, Harry Chapin Food Bank, Feed the Children, Guide Dogs for the Blind, Tunnels 2 Towers Foundation and many more.

“I am so blessed,” she repeated, “because I can give back. 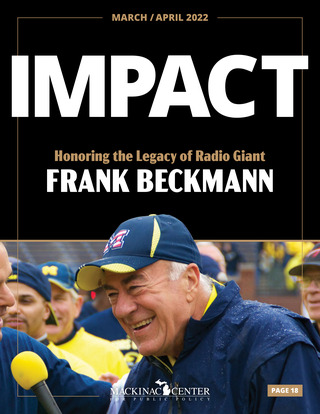