School funding in Michigan has reached record levels. But based on the historical record, simply adding more money to school budgets does not automatically raise performance and remedy educational woes. More attention should be focused on changing how dollars are distributed and used. The system for financing the state’s K-12 schools contains many layers created over extended periods of time. None is more far-reaching than Proposal A, a systemic change adopted in 1994.

While Proposal A importantly ensured basic student funding levels across the state and closed the foundation allowance gap among districts, key shortcomings remain. Outside the core foundation allowance, other local, state and federal revenue streams flow unevenly to districts, and change the incentives to district officials who want to best serve their students. These often reflect system priorities, detached from the needs of students whom the system is supposed to serve.

Michigan must reexamine how K-12 education is financed, building on the Proposal A model with further refinements that make sure dollars more fairly and effectively reach the students they are intended to serve. By adopting this series of funding changes, Michigan can provide the kind of dynamic student aid that sets the right priorities for the next generation of teaching and learning. 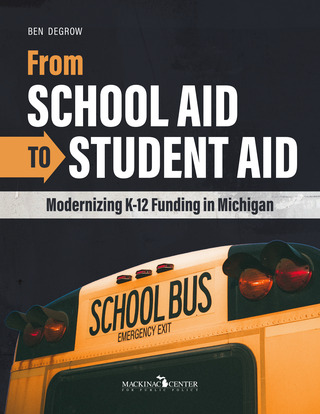