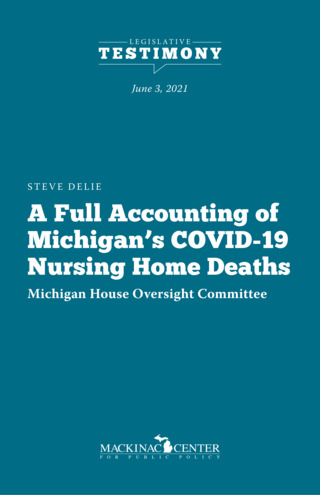 The following is testimony submitted for presentation to the Michigan House Oversight Committee by the Mackinac Center’s Steve Delie on June 3, 2021.

Thank you, Mr. Chairmen and members of the committee.

My name is Steve Delie, and I am an attorney with the Mackinac Center, as well as its policy lead for open government. We are a 501(c)(3) nonprofit research and educational institute that advances the principles of free markets and limited government.

I am here to testify today because we have a problem. Even though it is well known that COVID-19 disproportionately affects the elderly and specifically nursing home residents, the state is not able to provide an accurate total count of Michigan’s COVID-19 nursing home deaths.

Earlier this year, the Mackinac Center Legal Foundation sued the Department of Health and Human Services on behalf of journalist Charlie LeDuff for failing to provide public requested under Michigan’s Freedom of Information Act. Mr. LeDuff asked four simple questions of the department relating to nursing home deaths, but the department refused to fulfill his request. LeDuff asked for records that would show:

The department eventually settled our lawsuit by providing a spreadsheet listing the ages of the deceased and the date they died. What was troubling, however, was the fact the department confirmed that they lacked records that would indicate when identified COVID-19 deaths were added to the state’s tally or if the deceased contracted the virus at a nursing home.

This response led Mr. LeDuff and the Mackinac Center to conduct a further investigation. The results of that investigation were even more concerning than the department refusing to provide public records or not knowing how many COVID-19 deaths originated at nursing homes.

This is similar to an issue that led to the state of New York undercounting long-term care deaths. But what is most concerning is the department apparently has the ability to count these deaths accurately, but simply chooses not to.

This is exceptionally problematic. A sizable portion of the tally of Michigan’s total COVID-19 deaths are recorded by reviewing these death certificates. From July 2020 through April 2021, a period in which the department appears to have not been counting nursing home deaths stemming from death certificates, 5,551 deaths were added to the state’s total via reviews of death certificates. That represents 48% of all the deaths reported over the period.

It’s not possible to know how many vital records deaths should be associated with nursing homes based on the department’s use of the data. But, as an estimate, if 44% of all death certificates be traced back to nursing homes, as the department’s previous work demonstrated was the case for a portion of last year, this could mean that the state is undercounting nursing home deaths by about 2,400. Adding that amount to the total nursing home death tally would increase it by more than 40%, with more than 8,000 of our approximately 19,000 deaths being associated with these facilities. Nursing home deaths would then represent about 42% of all COVID-19 deaths, not the 30% the state currently reports.

There is another factor that is also contributing to an undercounting of Michigan’s total nursing home deaths. As both we and the Traverse City Record Eagle have discovered, the state does not track deaths at facilities serving the elderly that have fewer than 12 residents. There are 4,596 adult foster care and home for the aged facilities in Michigan — 3,474 of those serve fewer than 12 residents. Put another way, 76% of these facilities are not being tracked, despite serving up to 22,092 residents. We have no data on COVID-19 deaths from these facilities, so if even a smaller percentage of deaths can be attributed to them, it could significantly increase Michigan’s total number of nursing home deaths.

This matters for a number of reasons. From a transparency perspective, the state must provide citizens with an accurate picture of the effects of COVID-19 in Michigan, including who had died and where. But this data is also important for informing policy decisions regarding how best to respond to a pandemic like COVID-19. With the current data, neither of these goals can be accomplished.

Thankfully, it would be relatively easy to determine a more accurate count of our nursing home deaths. What is needed is a listing of every COVID-19 death, containing both place of death and the deceased’s residential address. We would also need a list of every long-term care facility in Michigan, including those licensed to serve 12 or fewer, along with their addresses. These two lists could then be compared against one another. Anyone whose primary residence was a long-term care facility should then be considered a nursing home death.

It is also worth investigating the department’s justification for not tracking long-term care deaths in this way. Understanding the department’s decision-making process would help to evaluate how we can prevent a similar problem from developing in the future, and it allows the public to hold its public servants accountable.

At this time, I would like to thank the committee for the opportunity to testify today, and I would invite any questions the members of this committee may have.

Steve Delie is the director of labor policy and Workers for Opportunity at the Mackinac Center for Public Policy.