The working group also briefly touched on the topic of obtaining funding through the Michigan Natural Resources Trust Fund. An opening question was asked, “What’s the hang up on nonprofits being able to access the trust fund?” Initial group response noted that this was not an accurate perception, and that public access to the fund is allowed. Another comment moved the discussion from private access to the dollars within the fund to suggest that a requirement for public access to conserved lands should be a necessary requirement of receiving any funds from the trust.

Since the working group meeting, a coalition effort has been mounted by some members of the Working Group and other groups to propose amendments to the MNRTF. Those proposed changes are expected to appear on the 2020 ballot as State Joint Resolution O.

Discussion in this area was limited. We expect it to see it return in future working group meetings.

Reducing red tape and the role of government: Discussion on the issue of funding naturally led to determining the proper (or best role) for state government in relation to private conservation efforts. The working group agreed that reducing red tape and better coordinating interactions with, or the requirements of, various levels of government would go a long way to improving and expanding conservation in Michigan.

Work group participants pointed out that,

Another possible example of effective streamlining efforts includes the 2017 federal executive order that requires a single, “lead agency” to oversee environmental impact assessments and permit reviews. Having a single agency act as the lead in these cases reduces repetition and speeds the process. Associated federal streamlining efforts include proposed National Environmental Policy Act updates that limit EIS page lengths and require agency decisions within a two-year window. Implementing similar updates at the state level could help to speed permit reviews/approvals for conservation activities.[*]

Where third-party certification programs — such as Forest Stewardship Council — are sought or established, state agencies could best promote private conservation efforts by helping to ensure certifications were meaningful, affordable, nonpunitive and integrated with other efforts.[†] Participants pointed to a harmonization of standards, with a strong auditing and verification process as an opening area of opportunity.

[*]“Presidential Executive Order on Establishing Discipline and Accountability in the Environmental Review and Permitting Process for Infrastructure” (The White House, Aug. 15, 2017), https://perma.cc/8PL7-J89H.

[†]For more information about the Forest Stewardship Council, see: http://www.fsc.org. 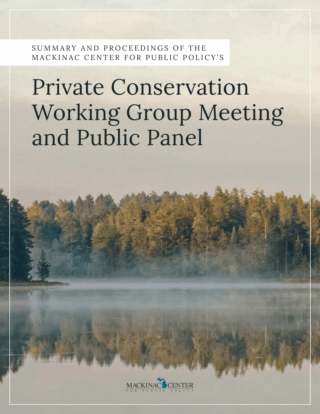