This program was created during the administration of Gov. Jennifer Granholm and was supposed to improve economic development by subsidizing government investments in high-technology, commercialization of research and advanced manufacturing, among others. “The 21st Century Jobs Fund will enable us to take a giant leap towards diversifying our economy and create thousands of high-tech, high paying jobs,”[65] Gov. Granholm said in 2006.

The fund was previously reviewed by the Mackinac Center in 2016. That study, “An Evaluation of Michigan’s 21st Century Jobs Fund,” concluded that the program “had no clear objectives or overall guiding strategy,” and “does not hold any clear consistent performance benchmarks.”[66] The author, James Hohman, noted that between 2006 and 2015 the state had dedicated hundreds of millions from the fund to economic development programs, but could only claim that 6,549 jobs had been created as a result.[67]

Even that small number of jobs is suspect, however, because the state could not offer evidence at that time that jobs would not have been created without the incentive. Nor does the program consider the opportunity cost involved in providing these incentives to select companies. Using the same dollars to build and repair roads may have very well created more jobs on net balance.

The Michigan Economic Development Corporation hired a consultant to look at a smaller slice of 21st Century Jobs Fund programs. Their report, “Michigan 21st Century Jobs Trust Fund— Entrepreneurship and Innovation Programs Impact and Effectiveness Study,” found a positive impact from the limited data on the program included in the review.

There were a few significant problems with the study, however. One is that it did not include nearly 400 deals that had apparently failed. According to the author, these firms had been supported by the 21st Century Jobs Fund, but were no longer “actively operating in Michigan in 2014.”[68] The study begins, then, by ignoring nearly 29% of companies that had been subsidized in some way but apparently failed to perform.[69]

The MEDC has a long history paying consultants who leave out important data from their analyses — and in ways that make state economic development programs appear more successful than they likely are.[*] The Mackinac Center has catalogued such instances involving the 21st Century Jobs Fund, the state’s[70] (now defunct) film incentive program and the Pure Michigan advertising campaign.[71]

[*] For more on this subject, see “A Plea for Skepticism about the MEDC: An Open Letter” on the Mackinac Center’s website. 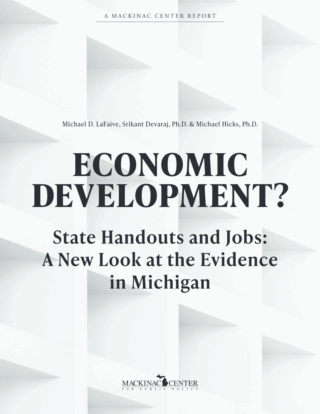