The frustration of being surrounded by different schooling options but with limited means to reach those opportunities is most profoundly seen in the state's largest city. Detroit is the locus of educational choice activity in Michigan. According to data from the Michigan Department of Education, about 60,000 of the city's 108,000 school-aged children opt out of attending the assigned district and enroll in a public charter school, neighboring district, or, to a lesser extent, one of the remaining private schools left in the city. The demand for options may be even greater than what the current variety of schools suggest, because a lack of reliable transportation may prevent some parents from actively seeking out different schools than the one they are assigned based on where they live.

The challenges related to school transportation have been closely studied in the Motor City. Not including students who need special education services, the Detroit Public Schools Community District offers yellow bus transportation strictly to assigned schools based on how far away students live — it is provided for students in grades K-8 who live more than three-quarters of a mile away and for high schoolers who live more than one-and-a-half miles away[24] These services are provided at a per-pupil cost that is more than 50% higher than the average Michigan school district. A 2017 Urban Institute survey found that 65% of Detroit district and charter school families drive their children to school, compared to only 20% who make use of a yellow bus service and even fewer whose children walk (8%) or take public transit (6%).[25]

Though most of the city's students have selected a school outside their residential district assignment, best estimates indicate that most also live within a 20-minute drive of the school they attend. Elementary students and those who are white or Asian are more likely to have a shorter commute than are older students or those who are African American or Hispanic.[26] Not surprisingly, Detroit residents who attend a conventional school district outside the city tend to travel farther than those who enroll in a public charter school, which might be located within the city limits.[27]

According to a 2014 Center for Reinventing Public Education survey, nearly 30% of Detroit parents said that barriers to transportation made exercising choice significantly harder.[28] Providing sustainable school transportation support could serve as part of a solution to help underserved students and families get access to better educational opportunities. Based on research from the Urban Institute, the average Detroit family who crosses district boundaries or opts for a charter selects a higher quality school than what is closest to them, as measured by state assessments of school performance.[29] If these options were made available through affordable and reliable transportation to a larger number of families, the educational benefits for students could be significant.

A recent attempt has been made to improve access to school transportation within Detroit. In 2018, a partnership between the city government, school district and the Skillman Foundation — a private, nonprofit charitable organization — launched the GOAL Line initiative. It created an 11-mile bus loop with stops at six district and four charter schools in northwest Detroit, serving about 150 students. A small survey of participating parents found that most do not use the bus route for commuting to a school of choice, but rather to transport their kids to after-school programs. Only a few respondents indicated that the availability of the bus line persuaded them to keep their child in a Detroit school rather than enrolling them in a nearby district, which was one of its backers' stated objectives. In July 2019, city officials announced the loop would continue and expand to four additional northwest Detroit schools in the following school year.[30] 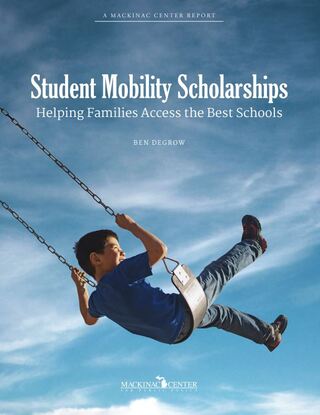