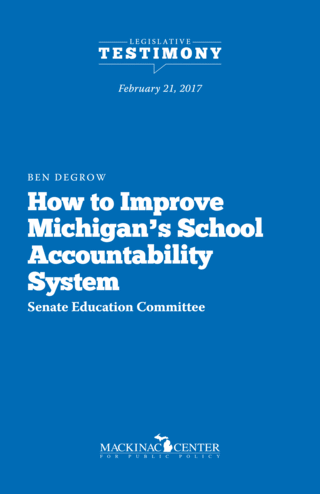 The following is testimony presented to the Senate Education Committee by the Mackinac Center’s Director of Education Policy Ben DeGrow on February 21, 2017.

Senator Pavlov and members of the Senate Education Committee:

Thank you for the opportunity to address you today and share a little bit of the Mackinac Center’s research and thoughts on school accountability during this important debate. Of course, ultimately, we are strong believers that the most effective accountability is that which is directly accountable to parents. That is provided through choice and giving parents the greatest latitude of choosing schools that meet their needs.

Yet given the fact that the state has a serious investment and involvement in education, we need to think carefully about how to create a system that can provide the most accurate, balanced picture of the value that schools are adding to students learning. The state also needs to provide a picture that is accessible and understandable to parents who are very important actors and should be kept in the conversation about school accountability.

At the Mackinac Center, in 2012 we started to produce the Context and Performance Report Card. It originated out of the need to create a more accurate picture of school performance for the state of Michigan. Research has shown that the state’s Top-to-Bottom ranking has a very strong statistical connection between higher student poverty and lower rankings in the state’s system. As a result, we wanted to add research to the conversation to demonstrate how schools that deal with students in poverty may outperform expectations based on that statistical relationship.

We don’t believe that our report card is in itself a valid substitute for the state’s accountability system, but we do believe that the research is very helpful to develop a system that is more balanced, accurate and accountable to parents.

For each school on the report card we take the four most recent years of available state testing data. I will use our most recent high school report card as an example. From 2012 to 2015, we looked at the average scale scores for all the different 11th-grade subject tests that students are required to take. We then took the rate of students who are eligible for free lunch under the federal program, because that measurement has the strongest correlation to student performance. We determined an expected score based on that free lunch rate, using regression formulas.

A few notable results emerge. On each of the three editions of our high school report card, the Star International Academy, with a majority of free and reduced-lunch students, has earned a number one ranking. That contrasts with its finish somewhere near the middle of the state’s Top-to-Bottom rankings, because they so far exceed the expectations based on their poverty rate. On our elementary and middle school report card that came out last year, two DPS charter schools — homegrown charter schools, the Martin Luther King Jr. Education Center Academy and Ross-Hill Academy — were the highest performers.

Also of note, selective admission schools that require students to demonstrate success academically before they can enter, tend to perform strongly on our report card. That is no surprise. We see also some helpful information that differentiates the quality of suburban schools, including those that often tend to float by on the affluence of their student population. Some are genuinely performing stronger than others.

These findings are very relevant to the conversation that the state is having now regarding what we do with the 38 schools that the state’s School Reform Office has described as needing the “next level of accountability.” Of the 38 schools, 70 percent of them (27) finished in the bottom 5 percent of our report card as well. In all, about 85 percent received an F. Three of these schools received a D, two received a C: Ann Arbor Trail Magnet School and the Kalamazoo Writers Academy. Very interestingly, one of the 38 schools has received an A, Thirkell Elementary in Detroit.

While there is a broad congruence between what we find and what the state finds, there are also some outlying schools that are beating the odds. A closer look at these results should definitely inform the priority of which schools should be receiving interventions and face possible closure. Schools making heroic progress should not face the same fate as those that fall short by every measure.

Going forward, our research also might inform the state’s thinking about how it ranks schools. First, an important caveat: Our reports are dependent on public data. Reported free and reduced-lunch rates and scale scores on state tests are pieces of information that anyone in the public could create a report card from.

What the state has the capability of doing because of data privacy concerns is to look at the individual growth of students. While the state’s Top-to-Bottom rankings are heavily weighted on raw proficiency scores, those scores have a valid use within the formula. But much more consideration has to be given to the value that students receive from year to year in the form of academic growth. Wherever possible, any valid, objective and reliable data beyond the state’s test should be incorporated into the measurements.

It’s important not just to ensure objective and reliable data, but also to keep parents in the conversation about school accountability. Parents should be able to understand in a clear and simple way how their school rates. What we’ve seen under the current hodge-podge of rankings is that it’s difficult for parents, policymakers and all sorts of people to understand how well a school is doing based on various color codes as well as the Top-to-Bottom rankings.

Michigan needs to have a single A-to-F grade for each school statewide, similar to what has passed in the Detroit schools legislation, so we are able to compare like schools and focus public attention on areas needed for improvement. Parents who are interested in more data beyond the single letter grade should be able to find the factors that go into the grade. And they should also be able to see how their schools are doing compared to schools of like demographics.

This information should be at the forefront for parents as we involve them in the process of which schools need interventions, and contemplate the ultimate decisions about whether schools should be closed or there should be major personnel changes at the school. Keeping parents closely involved in that conversation requires parents to be well-informed.

Last week the state of Michigan released its draft report to meet the requirements under the new federal ESSA education law. At first glance, the state’s school accountability report card offers some improved features: a clear demonstration of an overall school grade and the ability of parents to see the components that go into that grade.

Yet while raw achievement scores and student academic growth should be the two primary factors in rating schools, because they comprise the best objective data we have for measuring student performance, the state also should give careful consideration to adjusting the relative weights of these two factors.

At the elementary and middle school level, when students are at the beginning of their education, the weight of growth should be greater overall. Whereas the farther along students get in the education process, as students are approaching the “real world,” they will be rated not against students of like poverty. They are going to enter the workforce or college, and be compared to all their peers regardless of poverty. For that reason, the overall proficiency has to matter more at the high school level to provide needed balance.

Finally, the state of Florida has shown a way to measure schools in an area that matters. Their state’s accountability system has put extra weight into the formula for the growth of the lowest 25 percent of students in each school. Though their individual needs are different, every school has a bottom 25 percent of kids who could benefit from more opportunity to learn and achieve. Michigan too could show the crucial need of helping the students who need the most help, by giving that extra weight in its new rating system.

That concludes my presentation. Thank you for the opportunity to share.