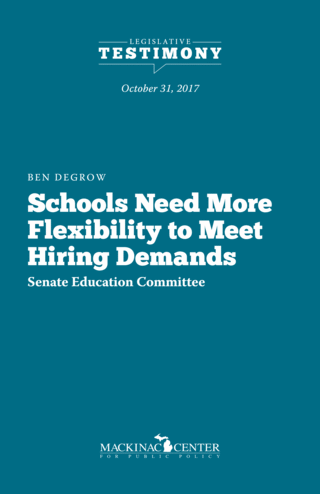 The following is testimony presented to the Senate Education Committee by the Mackinac Center’s Director of Education Policy Ben DeGrow on October 31, 2017.

Thank you for the opportunity to address you today regarding the supply of state-certified educators in Michigan public school classrooms. Concern about the issue is understandable, as parents want to be reassured that their children have access to effective educational opportunities, which often includes the guidance and support of instructors who can help provide a safe, welcoming environment and inspire a lifelong love of learning.

I hope to put the reports of Michigan’s alleged teacher shortage into context, and to offer general policy recommendations for consideration. To the extent that shortages exist, they can be relieved by relaxing centralized controls and by encouraging and empowering local education leaders to adapt current pay structures. Taking a clear-headed look at the current landscape and the broad scope of data and additional observations should help inform the best approach to serve the state’s students.

It is true that the state is experiencing a decline in the number of teachers being formally trained and certified through the state’s traditional preparation programs. But it is also true that MDE has identified nearly 105,000 people who have a teacher certificate and are of employable age but who are not currently teaching in Michigan public schools — greater than the number of currently employed public school teachers. Some of these 105,000 certified teachers may be working in other public or private education jobs.

All told, MDE has some pretty good data to paint the picture of what should represent the supply of quality teachers. Information on the demand of “customers,” in this case school districts and charter schools, is much less clear.

Available evidence tells us it’s not proper to describe the current situation as a general teacher shortage. News reports have highlighted challenges facing Detroit Public Schools Community District and some rural districts. At the same time, the Mackinac Center’s news service, Michigan Capitol Confidential, has reported several districts are experiencing a lot of interest from job-seeking professionals. For example, Novi received an average of 123 applicants for the 66 full-time teaching openings they had last year. On the other side of the state, Portage schools received an average of 41 applicants for each open position.

For districts experiencing real declines in prospective applicants, there are, unfortunately, no clear, easy answers. In 2016, MDE surveyed 360 teachers who chose not to renew their state certification. The responses to questions about why they didn’t maintain their certification were diverse, and not well suited to some popular narratives. One in three respondents cited a move to another state, a family or medical situation, or a decision to pursue more education as their primary reason not to renew certification. A smaller ratio, one in eight, said they failed to renew due to issues surrounding pay and working conditions. More respondents said their main reason was they couldn’t find or keep a job, which is evidence of a teacher surplus, not a shortage.

MDE also reports that the number of special permits issued to ensure classroom vacancies are filled by qualified substitutes increased significantly during the last school year. While this situation is not ideal in most cases, it does demonstrate that there are some short-term solutions available.

Some of the onus falls on local districts and schools to adapt their policies to recognize the realities of educator supply and demand. While MDE’s presentations highlighted the change in the number of endorsements issued in different areas in recent years, it didn’t show as clearly the comparative number of endorsements being generated in the state. Newly certified teachers receive one or more endorsements in subject areas and/or grade levels to show they have met the state’s content and other standards to fill those roles.

Awareness of these disparities and disconnect is nothing new. Nearly five years ago, then-state superintendent Michael Flanagan told the national publication Education Week that teacher preparation programs “can’t be an ancillary part of this system that’s so autonomous they don’t have to worry about these issues of supply and demand.”

So what’s the solution? The lowest hanging fruit that local education agencies should be readily grabbing is differential pay. Essentially, pay more for positions where qualified educators are in short supply. Send the signal to attract more people into institutions to prepare them for those positions. The predominant single salary schedule that bases salaries exclusively on seniority and advanced academic degrees is inflexible, ineffective and unsustainable. Michigan school districts need to start to use the laws of supply and demand to their advantage, not just settle to be victims of them.

In other words, it’s time for local districts to be more nimble. Some districts already have taken small steps, recognizing hard-to-fill areas. Though certainly an exception, the Holly Area School District has granted its superintendent the ability to offer an applicant in a hard-to-fill area a higher spot on the seniority scale. More districts could seek out the example of two of Colorado’s three largest districts — Denver and Douglas County — that have built in differential pay as features of their compensation systems.

Finally, on the state’s docket, it is time to reconsider the limits to our dominant teacher certification model and explore more alternative teacher certification opportunities. Quality alternative certification programs attract nontraditional candidates. For eight years Michigan has had a law on the books, but has certified hardly any teachers on this pathway. Within the past couple months, MDE approved such a program with an effective track record in other states: Teachers of Tomorrow. Candidates in this program have been shown to be as effective as their traditionally prepared peers, while also attracting a more racially diverse group of career-changers. These professionals with valuable skills and a passion to teach and serve need a more flexible approach to getting ready to succeed in the classroom. Michigan should step up its efforts to attract and approve such applicants to increase the supply pipeline.

Before the state pushes the panic button on a teacher shortage, officials need to grasp as clear a picture as possible of current conditions. And simple, effective remedies that change underlying incentives need to be explored and tried first.

Thank you for your time and attention. I am available to answer any questions.