Parents seeking an educational option first must know whether their child is eligible to enroll in a different public school. Unless it is a full-time online school, parents also need to figure out how to transport their child to school. To form effective policy, it is helpful to understand the current level of enrollment and access to publicly funded transportation available to families.

Public charter schools may not discriminate based on a student’s beliefs, background or academic ability. A student may only be denied admission if the charter school has reached the cap for total enrollment or the enrollment cap for a specific grade, as stipulated in the school’s performance contract. A charter school must use a random selection process if more students opt to enroll than space is available.[17]

Conventional school districts have greater discretion over whether and how they will receive students from outside their boundaries. Since no data is centrally collected, however, little is known about the specific limitations individual districts use to control how many and which students they will enroll through Schools of Choice.

To get a better understanding of how districts use Schools of Choice, between April 18 and June 9, 2017, the Mackinac Center collected information about Schools of Choice policies from 168 Michigan school districts in nine different ISDs.[*] These districts combine to serve approximately 60 percent of the state’s public school students. The rate of interdistrict choice participation in these districts is similar to, or slightly higher than, the state as a whole. For 39 of the 168 districts, nonresident students comprised 30 percent or more of their enrollment during the 2016-17 school year. Eight districts enrolled more students who lived within the boundaries of a different district than students who lived within their own boundaries.

A conventional school district’s governing board may choose to participate in multiple types of interdistrict choice. In all, 161 of the 168 districts opened their doors to at least some nonresident students through one or more options, as follows:

Not all school districts are equally invested in boosting enrollment and funding through Schools of Choice. Fifty-nine of the 161 participating districts, 37 percent, indicated no limits on how many nonresident students could be admitted for the fall 2017 term. Six other districts approved only an aggregate total, such as Godfrey-Lee Public Schools, which limits its nonresident enrollment to 25 students, or Grand Rapids Public Schools, which limits its intake to 500. Most of the remaining 96 districts restrict the number of incoming transfers by specific amounts at each grade level, though some districts also limit Schools of Choice participation to certain schools or specialized programs.

Despite their willingness to participate to some degree in Schools of Choice programs, districts do not necessarily make it easy for nonresident parents to apply and enroll. Of the 161 participating districts, one-quarter of them failed to post or link to an easy-to-find nonresident enrollment application on their website and 14 had no information about Schools of Choice enrollment online at all.

The lack of helpful information about schools can pose a barrier for families desiring to exercise choice. One in four Detroit parents surveyed in 2014 by the Center on Reinventing Public Education said they were unable to get needed information. Additionally, 35 percent of the 500 parents in Detroit admitted to being held back by their own confusion about whether their student was eligible to attend a particular school.[18]

Further, Michigan school districts are not required by law to provide student transportation, no matter if the students are residents or nonresidents. In its recent survey, the Mackinac Center identified Schools of Choice transportation policies for 130 of the 161 participating districts. But only 21 of these 130 districts, 16 percent, stipulate that transportation is available for nonresident students from an existing stop and only “if room is available.” Four other districts provide transportation on some other limited basis. Most districts’ policy is to leave it entirely to nonresident families to find a way to transport their children to school.

[‡] Author’s calculations based on data from the National Public Education Finance Survey. It is worth noting that a small but significant number of charter schools do provide some form of student transportation services. Out of 301 charters, only 47 spent more on student transportation than the median conventional district (roughly $450 per pupil). 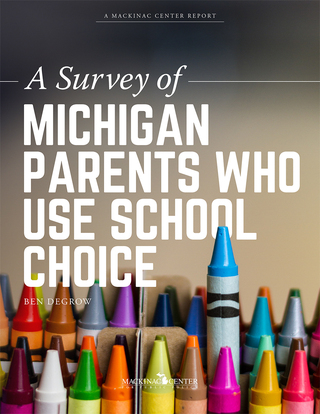