Flashy Projects Won’t Save Detroit: Here’s What is Hampering Recovery

City is standing in the way of economic progress 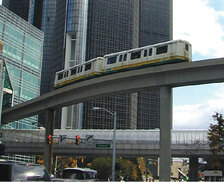 Editor's note: A version of this article entitled "Detroit standing in way of own recovery" first ran in the Detroit News on Oct. 14, 2016.

Detroit emerged from bankruptcy in 2014 and it didn’t take long for the hype to begin. A quick search produces a multitude of state and local governments and news sites promoting “Detroit’s Comeback.” But this is nothing new: For decades, city and state officials and local leaders have projected revitalization in Motown.

The point here is not that these projects did nothing for the city or even necessarily that they were a bad idea. But it shows that economic recovery takes more than the buildings downtown.

Is it real this time? It’s too soon to tell. True, there is hype about the city seeing some substantial private investment – but job growth is lagging behind the rest of the state, with Detroit fourth from last among the 81 Michigan municipalities with more than 25,000 people.

There is a lot that city and state officials can do for the once-great city. Most notably, it is way too expensive to live there. Detroit has the highest income tax in Michigan. And Wayne County is by far the highest-taxed county, tacking on extras to fund the Detroit Zoo, county parks, the Detroit Institute of Arts, the community college, the jail, an intermediate school district and other local public authorities.

The city has the second-highest home and industrial property taxes in the nation while commercial property is taxed the highest of the nation’s 50 largest cities. And it is hard to argue that the public services citizens are getting are worth the cost.

This is combined with a business and regulatory environment that is the worst in Michigan (and perhaps the nation). The city requires occupational licenses for dozens of jobs that almost no other city requires, like auctioneers, landscapers, batting cage operators, and more. Business licenses are even more obscene, with fees that are way above and beyond most cities – for things like a $400 “awning tax” and $1,800 valet license. It is four-and-a-half times more expensive to start a food business in Detroit than New York City.

Now that the bankruptcy has restructured Detroit’s finances, it is time to overhaul the rest of city government. Real economic growth is way more than flashy headlines and public entities partnering with local governments. If the city wants to improve, it has to do the little things right – like getting out of the way.

How Policymakers Should React to Bad Big Business Headlines