What You Owe for Pensions 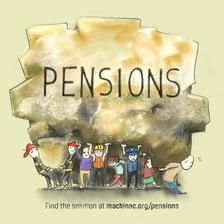 Like state and local governments across the nation, Michigan has a variety of public entities that offer pensions to former and current employees. And like nearly all other governments, Michigan’s units have huge unfunded liabilities.

Unfunded liabilities exist because politicians have not saved enough money to pay for the pensions promised to employees and retirees.

The state employee system was closed in 1997, meaning new employees were shifted to a defined contribution, 401(k)-type plan. These retirement plans pay for benefits as they are earned and cannot rack up unfunded liabilities. The unfunded liability of the state employee system, unlike that of other open pension systems, is trending down and will eventually be paid off.

Our study of Michigan’s pension systems, at all layers of government, show a hard truth: Pension systems don’t get funded – they get underfunded. Politicians simply cannot be trusted to put aside enough money for benefits later since they’d rather spend the money now.

It’s time to put the money back in our hands, and shift new employees off the pension system.