Despite Candidate Rhetoric, Michigan Exports to Mexico Continue to Gain

Freer trade is good for Michigan and the country 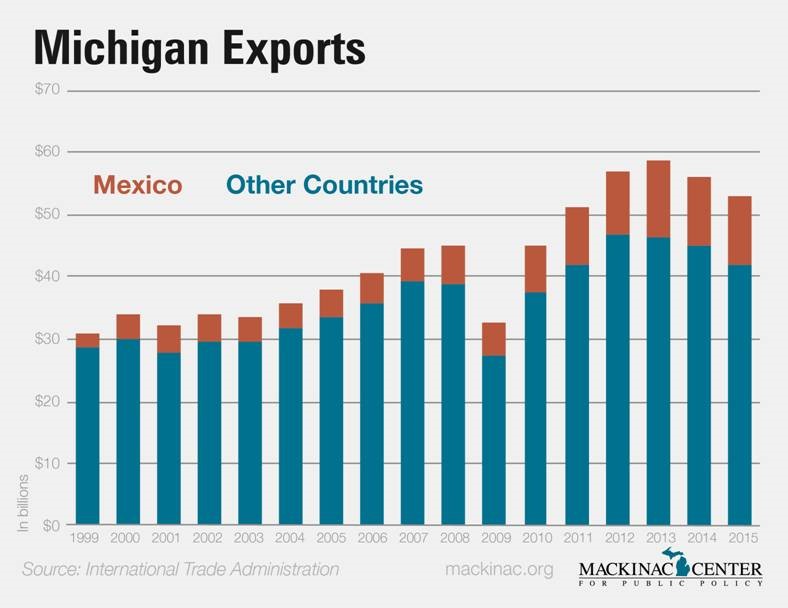 The North American Free Trade Agreement’s influence on the state economy is being argued in both Republican and Democratic parties. (National Public Radio recently interviewed me on Bernie Sanders’ claims.) The presumption is that Michigan’s economic history is a prime example of the downside to free trade.

Yet a simple look at the data suggests that more trade with Mexico has been a boon to Michigan. Mexicans purchase more Michigan-made products than the citizens of every other country save Canada, and the demand continues to increase.

Michigan exports to Mexico increased roughly five fold since 1999 (the earliest in the data source), growing from $2.4 billion to $11.1 billion in 2015. The country now accounts for 20 percent of all Michigan exports.

Blaming more trade with Mexico for this state’s past economic performance ignores the other side of the free-trade coin that directly benefits Michiganders: Mexicans buying Michigan-made products at an increasing rate.

“Basically, We Created a Powder Keg”