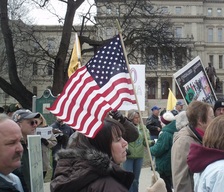 The “Economic Freedom of the World Index” published by the Fraser Institute of Canada measures the degree to which the world’s 157 nations and territories permit voluntary, peaceful economic exchanges between their own citizens and with people in other countries. The most recent index has just been released, and based on data from 2013, it ranks the United States 16th in economic freedom.

Given this country’s history and traditions, America should be far and away No. 1; that fact that it does not hold the top slot is yet more evidence of how governance has gone off track in this country in recent years.

The index is based on five major categories of data: the size of the government; the strength of the legal system, including property rights;  the soundness of the local currency; the freedom to trade with other nations; and economic regulations. Within these categories are more than 40 variables, such as “government consumption as a share of total consumption” (in the “size of government” category) and “inflation: most current year” (in the “sound money” category). Each variable gets a score. All the scores within a category are converted into an average score for the category, and the categories are averaged together to give a country’s overall score. The highest possible score is 10.

The overall score for the U.S. is 7.73, down 0.9 points since 2000. This decline may seem small, but the index’s authors observe that it is three times the average decline among the top-20 nations that comprise the Organization for Economic Cooperation and Development, the largest and most diversified economies in the world. More important for real people, our decline is reflected in the real-world consequence of slower economic growth, which means less opportunity for all Americans.

America’s declining economic liberty goes against a worldwide trend of growing freedom. In 1980 the average freedom index score for nations appearing in the index was 5.31. As of 2013 the world average stands at 6.86. According to the authors, the U.S. was ranked first among OECD nations from 1970 through 2000 (and in about third place if Hong Kong and Singapore were added to that list).

Since then our decline has been precipitous. It also portends a slower economic growth rate than Americans have been accustomed to, as much as half of the three percent annual growth we once enjoyed.

Some of the 15 nations that outperformed the U.S. in the current index may surprise you. They include, ranked from highest to lowest: Hong Kong, Singapore, New Zealand, Switzerland, United Arab Emirates, Mauritius, Jordan, Ireland, Canada, United Kingdom, Australia, Georgia, Chile, Qatar and Taiwan.

Good for them, but honestly: Georgia, Jordan, UAE and Qatar? How low the mighty have fallen to be surpassed by such recently benighted polities.

For example, just 25 years ago Georgia was the “Georgian Soviet Socialist Republic,” its people chained by the dead hand of communist central planning, coercion and corruption. On a more hopeful note, if even Georgia can throw off its chains, then surely the U.S. can unwind the damage done by 15-plus years of bad federal policies.

This is a vital task, because economic freedom correlates with so many of the things people value, not the least of which is material well-being. Per capita personal income for countries in the bottom 25 percent of the index averages less than $7,000, while average annual incomes in the highest quartile all exceed $38,600. Those who imagine this to be just coincidence might consider investing their retirement nest eggs in Venezuela, Republic of Congo or Libya, the three least-free nations economically.

The Fraser Institute also publishes economic freedom indexes for the states and provinces of Canada, Mexico and the U.S., with the 2015 edition coming out later this year. In last year’s index, using data through 2012, Michigan was a mediocre 37th among the 50 states, up from a dismal 45th place in 2009. It will be interesting to see how the Great Lake State fares in rankings assembled after its right-to-work law went into effect in 2013.

Empirical evidence shows that economic liberty and human well-being are highly correlated. If the world’s policymakers were to govern on this basis, world poverty would be reduced and the untold human tragedies associated with subsistence-level existence would be that much fewer.