How to make Senate’s tax cut trigger the real deal 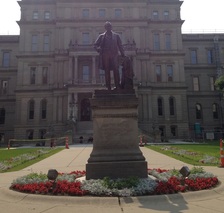 Both the Michigan House and Senate have passed their own road funding plans after the colossal failure of Proposal 1. Both plans show that lawmakers have learned from that debacle.

The House proposal contains only a small tax hike on diesel, plus modest new assessments on electric, hybrid or “alternative” fuel vehicles (whose owners pay little or no gas tax). The rest of its new revenue for roads comes from earmarking a portion of future income tax revenue to road funding.

There are ways to strengthen the provision, however, and an income tax rate cut could more than mitigate the proposed fuel tax hike.

The 4.25 percent income tax is the second-largest levy imposed in Michigan — only property taxes take more — so reductions in its rate can have a large economic impact.

In its current version, the Senate’s plan would reduce the state income tax rate whenever the state’s General Fund has been allowed to increase faster than inflation. “Allowed,” because the Legislature has ample opportunities to game the GF in ways that would allow its members to avoid promised tax cuts with minimal accountability.

They might not even have to play games to make the provision a dead letter. Even as total state tax revenue inceased strongly from 2009 to 2014, official budget reports show that revenue allocated to the GF rose by less than the rate of inflation. In other words, had the Senate’s tax cut “trigger” been in effect during the past five years of steady tax revenue growth, it would have triggered no income tax cut.

One reason for sluggish GF growth was the rampant expansion of corporate welfare by previous administrations. Specifically, the practice of doling out “refundable” business tax credits to favored businesses, in agreements extending up to 20 years into the future. This created a $9 billion unfunded taxpayer liability that is being paid down by taking money from the GF.

Future lawmakers could also dodge the tax (and spending) cuts the Senate’s trigger might cause with various gimmicks; the simplest would be to just transfer some money from the GF to the state’s “rainy day fund.”

And in any event, other less objectionable earmarks divert most state tax revenue away from the GF (to school funding, for example). The state collected a total of $27.4 billion in taxes last year, of which only $8.8 billion was directed to the GF.

These problems could be easily avoided by simply placing future income tax rate cuts in statute. This would put taxpayer savings on autopilot, with no opportunity for politicians to game away promised rate cuts in ways that dodge public accountability.

That’s still no guarantee that rate cuts would actually happen. A 2007 income tax rate increase also baked future cuts into statute, but these evaporated in the 2011 corporate and individual income tax overhaul that abolished the Michigan Business Tax.

But at least the politicians would have to cast a fairly unambiguous roll call vote to cancel a tax hike.

Alternatively, a Republican-run House, Senate and governor’s office could summon the political will to make a large gas tax hike revenue-neutral by offsetting it with equivalent income tax rate cuts, or continue to look within the budget to find more money for roads.

Or the Senate could just go along with the House-passed road plan, which reprioritizes current revenue with no big fuel tax hikes.