Detailed Reporting of Receipts and Disbursements in the LM-2

Schedules 14 through 19 of a Form LM-2 disclose the most detailed financial information. Schedule 14 reports “other receipts,” while Schedules 15 through 19 disclose disbursements in functional expense categories. For each of these six schedules, the labor organization reports on an individual line any “major” receipts or disbursements of $5,000 or more.[41] Additionally, the amounts per payer and payee are aggregated for the year, and if together they equal $5,000 or more, a separate line item with identifying information on the payer or payee is included.

For each listed entity in these six schedules, the labor organization reports its name and address, and the type or classification of the entity, such as printing company or political action committee. It then discloses the purpose for each transaction that is $5,000 or more, such as support for organizing campaign, support for worker solidarity programs or legal advice. The union also reports the amount and date for each transaction that is $5,000 or more.

For the labor organization member who desires to obtain a good understanding of the entities that are receiving his union’s business, these six schedules provide valuable information. It was information disclosed in these schedules that enabled reporters and members in the examples described above to uncover corruption.

Disclosure of Expenditures for Representational Activities

Schedule 15 discloses the disbursements made by a labor organization for representational activities and requires the itemization described above. These activities include disbursements associated with negotiations with an employer for a collective bargaining agreement, the administration of the collective bargaining agreement, campaigns to become the representative of employees, campaigns to avoid being decertified as the representative of employees, and other disbursements to attract and retain members.[42] Disbursements in this category represent expenditures to perform the core function of a labor organization, representing employees regarding the terms and conditions of their employment.

The example below from the 2014 Form LM-2 for the MEA shows how these disclosures are presented.

Disclosure of Disbursements for Politics and Lobbying

Of particular interest to union members is Schedule 16, which reports a labor organization’s disbursements for political activities and lobbying. Lobbying activities include disbursements “associated with dealing with the executive and legislative branches of the Federal, state, and local governments and with independent agencies and staffs to advance the passage or defeat of existing or potential laws or the promulgation of any other action with respect to rules or regulations (including litigation expenses).”[43]

Political activities include disbursements “intended to influence the selection, nomination, election, or appointment of anyone to a Federal, state, or local executive, legislative or judicial public office, or office in a political organization, or the election of Presidential or Vice Presidential electors, and support or opposition to ballot referenda.”[44] The types of disbursements disclosed on this schedule can range from airline tickets to robocalls.

Using this schedule, the public is able to see just how much unions spend on politics. Based on what unions report, spending for political purposes is so important that, in some situations, unions take on multimillion dollar debts in order to free up cash to spend.

The SEIU, one of the nation’s largest unions, appears to structure its finances largely around disbursements for presidential elections. In 2009, The Wall Street Journal reported:

An SEIU spokeswoman says the union works on a four-year cycle, in which it goes “all out for the presidential election” and then rebuilds its finances. She adds the union has paid back more than $10 million of the $25 million it borrowed [in 2008].[45]

A review of data from 2012, the most recent presidential election year, reveals that SEIU was the top spender among unions on political activities and lobbying, spending $113.8 million.[46] The chart below shows the top 10 unions in terms of spending on political activity and lobbying in 2012.[47] These 10 labor organizations unions spent a combined $379 million in 2012.

Information from this schedule helps union members and the public understand not only the political spending by individual unions, but also the effect that the aggregate spending has on elections. A 2012 Wall Street Journal analysis of LM-2 data revealed that between 2005 and 2011 labor organizations reported spending $4.4 billion on political activities and lobbying.[48] The paper found that the time spent on political activities and lobbying by union officers and employees in 2010 was “equivalent to 3,242 full-time operatives with a payroll of $214 million,” essentially a large political army.[49]

The example below shows how these disbursements are reported on Schedule 16 and comes from the 2014 Form LM-2 for the United Food and Commercial Workers Local 876, located in Madison Heights, Michigan.

Disclosure of Contributions, Gifts and Grants

Schedule 17 of a Form LM-2 discloses any contributions, gifts or grants made by a labor organization. The example below from the National Education Association’s 2014 Form LM-2 demonstrates how large some of these grants can be. Altogether, the NEA reported spending over $100 million in these categories in 2014.

Schedule 18 discloses general overhead disbursements “that cannot be allocated to any of the other disbursement categories.”[50] An example would be costs associated with maintenance of the labor organization’s office.

The last schedule on the Form LM -2, Schedule 20, is for officer and employee benefits. Here the labor organization details the gross amounts disbursed as benefits to the labor organization’s officers, employees, members and beneficiaries. This schedule reports items such as health insurance premiums. Unlike Schedules 14 through 19, this schedule is not itemized by individual disbursement. In addition to a description of the reason for the disbursement, the type of entity that received the disbursement and the amounts is disclosed. An example of this schedule from the 2014 Form LM-2 for the Michigan Education Association is below.

The last part of the Form LM-2 is Item 69, which reports information in response to the questions asked at the top of the form, and provides a place for the labor organization to provide more information for other items that require an explanation. For example, if the union has a trust or a political action committee, the identifying information on those is reported in this section. An example of this section, from the 2014 Form LM-2 for UFCW Local 876, is below. 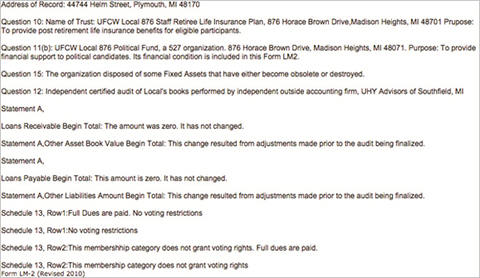