Basic Elements of the Form LM-2

The Form LM-2 begins with identifying information for the labor organization, such as its name, address and the file number that has been assigned by the Office of Labor-Management Standards. The labor organization then answers a series of questions, including whether it has a trust or political action committee, whether its books have been audited, whether it has discovered any loss or shortage of funds or other assets, the dollar amount of bonds for employees who handle their funds, and more. The labor organization also reports the number of members that it has at the end of its fiscal year and the rates and types of dues these members pay.

This general information is followed by summarized financial data, starting with statements on the assets and liabilities of the labor organization (Statement A), then statements for their receipts and disbursements (Statement B). Details about each of these areas are reported in different categories, or schedules: Assets are reported in five categories, liabilities in three categories, receipts in four categories and disbursements in nine categories. Below are examples of Statements A and B from the 2014 Form LM-2 for the national headquarters of the United Auto Workers. 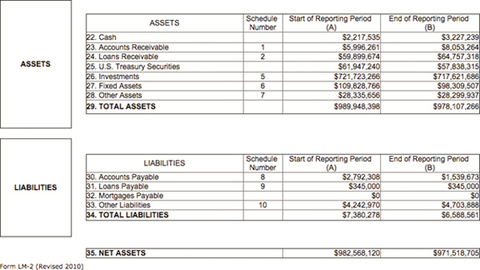 Graphic 3: Statement B, Receipts and Disbursements, from UAW LM-2, 2014 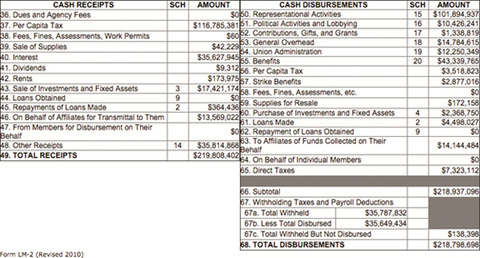 After these statements come Schedules 1-10. The schedules contain the information described in the table below. 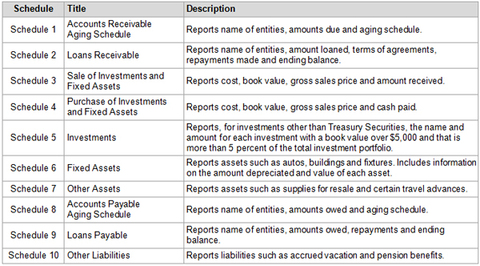 The names of union officers, their titles, status (new, current, or past officer) and disbursements made to them are disclosed in Schedule 11. The labor organization is required to disclose each the officer’s gross salary, allowances received on a periodic basis, disbursements for official business (such as meal allowances) and other disbursements that “were essentially for the personal benefit of the officer and not necessary for conducting official business.”[40]

Additionally, the union is required to estimate the percentage of the officers’ time that is spent conducting business in five categories: representational activities, political activities and lobbying, contributions, general overhead, and administration. These categories are important because they allow dues-paying union members to compare how much time their officers are spending on representing their interests compared to other priorities.

Unions must report the same information described above on Schedule 12 of a Form LM-2 for employees who made $10,000 or more.

Graphic 5: Schedule 11, All Officers and Disbursements to Officers, from UAW LM-2, 2014

Disclosure of the Number and Type of Union Members

A breakdown of the types of membership in a labor organization is reported on Schedule 13. The example below comes from the 2014 Form LM-2 for the Michigan Education Association.