Over 60 percent of Democratic, Republican voters say yes to Michigan roads, no to MEDC

MIDLAND — Two-thirds, or 66 percent of likely 2016 Michigan general election voters say they would rather see hundreds of millions of dollars spent on roads than given to businesses through the Michigan Economic Development Corporation (MEDC). The poll was conducted by Mitchell Research & Communications, Inc.

The Mackinac Center for Public Policy, which commissioned the poll, has been critical of the MEDC since Gov. John Engler’s executive order to create it in 1999. The MEDC takes money from many taxpayers and gives it to a few. For many years, Mackinac Center experts have said that the practice is unfair to taxpayers.

In addition to being ineffective, the MEDC lacks openness and transparency in how it spends taxpayer money.

The poll consisted of 599 likely 2016 general election Michigan voters. Of the respondents, 46.1 percent self-identified as Democrats, while 32.4 percent identified themselves as Republicans. Both groups were skeptical of the MEDC’s value: 69.2 percent of Democrats said tax dollars should go from the MEDC to roads, while 62.9 percent of Republicans said the same.

Mackinac Center policy experts argue that corporate welfare does not work and that the MEDC and its many so-called jobs programs should be eliminated. 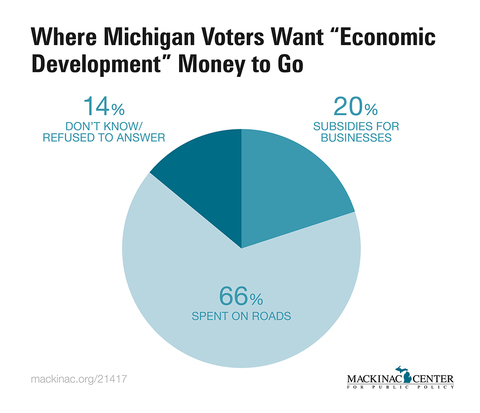 The poll was conducted from June 1 to June 4 via telephone (413 landline respondents, 186 cellphone respondents). The margin of error is plus or minus 4 percentage points at the 95 percent confidence level.