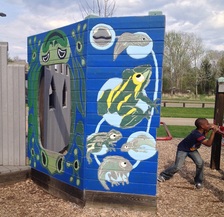 A study claims global warming is killing frogs. But that conclusion is speculative.

With so many complex policy issues, how do we decide which are worthy of our support or deserve to be opposed? Environmentalism, my specialty, is rife with policy initiatives that are often based on emotional appeal, rather than well-reasoned articulations of facts.

As a boy, I read Isaac Asimov’s science fiction classic “Foundation” series that featured psychohistory and symbolic logic. I was fascinated by how the Foundation applied symbolic logic to political documents and treaties to interpret what was really being said. In one situation, the Foundation reduced the fine print of a five-page treaty to two statements: “Obligations of Anacreon to the Empire: None! Powers of the Empire over Anacreon: None!”

Reasoning is an acquired skill that can be learned, developed and honed. With all this information at our fingerprints, we ought to be better able to reason our way to conclusions than ever before. But it’s still difficult to reason — to think clearly and logically — because we are easily persuaded by appeals to our emotions. Plus, some groups benefit from us not reasoning well, preferring that we embrace selective facts and selective history; preferring that we succumb to faulty or twisted logic or slogans; preferring that we stay in ideological silos.

Learning to reason well starts with the humility to accept that we don’t have all the answers, with receptivity to new information and new arguments, and with the relentless pursuit of verifiable evidence, historical precedence and data that support the reasoning process.

Being receptive to new information and perspectives means setting aside visceral responses, accepting the possibility that someone we dislike might make a sound argument, or that someone we like might be making a flawed argument. In both cases, we ought to stay focused on what’s being asserted and how this assertion is supported, and be on the lookout for sloganeering, logical errors, selective facts, or the abuse of proportionality.

Being able to recognize erroneous logic is an important first step in learning how to reason better. Planes fly; birds fly; therefore, planes are birds. This is a simplistic example, though you might be surprised at how often similar arguments are proposed with straight faces. Because some fraternities act abusively toward women (planes), many people were inclined to believe the false Rolling Stone story about the University of Virginia fraternity (birds), ignoring the lack of evidentiary support for the accusation.

Another common reasoning mistake is to begin with sound data, but ignore the absence of facts linking this sound data to conclusions. I came across this issue in a Wall Street Journal article that purported to connect frog population decline to global warming. Here was my response:

When science records what it observes, when it measures phenomena, and when it faithfully and accurately models that data, its finding are valid, useful and reliable. But when scientists, however well-informed, offer speculation based on these observations, measurements and models, credibility and reliability are diminished, sometimes drastically. Thus, the observation that the frog population worldwide is declining, corroborated by measurements, in combination with models that purport to demonstrate global warming is not (yet) sufficient to assert the title of your article (“Study Finds Global Warming Is Killing Frogs”). This conclusion is speculative, as it is based on the assumption that warmer temperatures at higher elevations in Costa Rica are responsible for the viability of the fungus that is infecting the frogs.

“Belief in the Law of Small Numbers,” by psychologists Daniel Kahneman and Amos Tversky, revealed that statistical inferences are often based on sample sizes too small to support conclusions. According to Kahneman, “We pay more attention to the content of the messages than to information about their reliability … a view of the world that is simpler and more coherent than the data justify.” Kahneman also warns, in “Thinking, Fast and Slow,” against focusing on a specific attribute, such as benign climate, and using it to arrive at a broader conclusion. For example, Californians, despite the better weather, reported they weren’t any more satisfied with their lives than Michiganians.