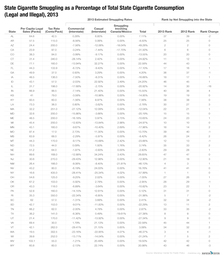 In the newest iteration of our annual cigarette smuggling study, we find that New York remains America’s number one smuggling state for inbound, illegal traffic at 58.0 percent of the total market. That is, of all the cigarettes consumed in the Empire State in 2013 — legal and illegal —58 percent were smuggled in. We also estimate that nearly 25 percent of the Michigan cigarette market is comprised of contraband smokes.

Something should be done about the nation’s rampant smuggling problem. High excise taxes on cigarettes have led to all sorts of unintended consequences: smuggling; violence against people, police and property; product and tax stamp counterfeiting and even the financing of terrorist groups. Policymakers can roll back this illicit trade — if interested — by cutting taxes, or adopting smarter and more intensive police tactics or both.

Our smuggling study — conducted this year in concert with the Washington, D.C.,-based Tax Foundation — is constructed to compare adult smoking rates per capita with legally paid sales. The difference between the two by state has to be explained, and we believe the difference is from cross-border activity, most of which is illegal smuggling of two varieties: casual and commercial.

Casual smuggling occurs when individuals cross state lines to buy cigarettes or do so on the Internet and typically for personal use. Some states permit a modicum of cross-border traffic for personal use and our study sweeps that traffic into its smuggling estimate. Commercial smuggling involves long-haul, large shipments from lower tax states such as North Carolina or Virginia.

The top five inbound smuggling states are New York (58 percent), Arizona (49.3 percent), Washington (46.4 percent), New Mexico (46.1 percent) and Rhode Island (32 percent). The top cigarette smuggling states in the other direction — that is, exporters — include New Hampshire (28.7 percent), Idaho (24.2 percent), Delaware and Virginia (22.6 percent and tied for third) and Wyoming(21 percent). For every 100 cigarettes consumed in New Hampshire in 2013, an additional 28-plus were smuggled out.

The top states for inbound casual contraband smuggling were New York and Washington, while Vermont and New York had the highest rates of inbound commercial smuggling.

New York ranks so high in both the casual and commercial smuggling because it has very high excise tax rates (state and city) and is located close to low-tax Virginia. The model used for this study would report higher rates for some northern states if it were not for the fact that it subtracts out exports smuggled to Canada.

The biggest smuggling rate increase came from Illinois, which moved up 16 places in our rankings to 14th among the 47 states in our analysis. We estimate that in 2013 almost 21 percent of cigarettes consumed in the Land of Lincoln were illicit.

We attribute this sizeable increase in smuggling to recent increases in cigarette excise taxes at the state, county and city levels. Since 2012, the state of Illinois, Cook County (in which Chicago is located), and the city of Chicago raised the excise taxes they impose on cigarettes by $1, $1 and 50 cents, respectively. At $6.16, Chicago now has the highest state-local cigarette excise taxes in the nation, according to Campaign for Tobacco Free Kids.

To make smuggling matters worse, Cook County is also home to the cities of Evanston and Cicero, which impose their own excise taxes. With relatively low-tax Gary, Ind., only 30 miles from downtown Chicago, profit incentives for smuggling are at an all-time high.

A study performed before recent tax hikes using 2007 data examined discarded cigarette packs in the Chicago area to estimate the degree of smuggling that occurs in the area. By examining the packages, researchers could determine from the tax stamp where the cigarettes had originated. According to the author, 29 percent of discarded packs collected in Chicago came from Indiana, and just 25 percent bore the city of Chicago’s tax stamp, meaning smuggling across municipal lines is a problem as well.

Michigan exported cigarettes equal to 3 percent of its total market to Canada in 2013. And that is just cigarettes. In January 2014 a semi-tractor containing 30,000 pounds of illegal, loose tobacco was confiscated by Canadian officials at the Ambassador Bridge (which connects Detroit and Windsor, Ontario). Loose tobacco trafficking is also an unintended consequence of high taxes on cigarettes. Roll-your-own products cost less whether the product is purchased legally or otherwise.

Over the past six years we have seen many other unintended byproducts from excessively high taxes on a legal product: violence against police, people and property, too. Perhaps the most offensive is seeing the illicit trade in cigarettes be used to generate profits for terrorist cells operating globally and in the United States.

In 2013, the In Amenas hostage crisis in Algeria (which resulted in 39 foreign-born hostages being killed) was led by an al-Qaeda-associated terror group led by Mokhtar Belmokhtar, sometimes known as “Mr. Marlboro” for his large-scale cigarette smuggling operation.

In 2011 a federal judge resentenced Mohamad Hammoud for his role in “providing material support to the foreign terrorist organization, Hezbollah.” with profits from his North Carolina to Michigan smuggling cell from 1995 to 2000. There have been other smuggling-terror connections to Michigan, too.

In May, 2010 another smuggler plead guilty to several charges in addition to cigarette smuggling. He apparently purchased cigarettes in Tennessee and shipped them to Detroit, Michigan where counterfeit tax stamps were affixed to each packet and resold. His profits were apparently sent overseas. He was also recorded via wiretap trying to recruit for “al-Qaeda and revealing a desire to target a shopping mall in an act of a holy war,” according to one published report.

Rampant smuggling — and its related ugliness — can be thwarted to a degree by cutting taxes, improving law enforcement operations, or both. We strongly suggest the former route. Higher excise taxes are the root of the problem so lower ones should be at the forefront of a solution.

Michael LaFaive is director of the Morey Fiscal Policy Initiative at the Mackinac Center for Public Policy, a research an educational institute headquartered in Midland, Mich. Todd Nesbit, Ph.D., is an adjunct scholar with the Center and a senior lecturer in economics at Ohio State University. Scott Drenkard is an economist with the Tax Foundation in Washington, D.C. Permission to reprint in whole or in part is hereby granted, provided that the authors and the Center are properly cited.