For years union membership has been in decline. In 2012 union membership hit the lowest percentage of the American workforce since 1916. The union business model, based largely on industrial organizing efforts from the 1930s, does not appear to carry over well for today’s educated and transient workforce. It appears unions have not evolved to meet the needs of most modern workers.

There are several ways labor organizations could improve and become more responsive to the needs of workers. Unions should move away from their traditional operating formula and function more like professional associations, focusing on providing valuable services to members and representing the diverse set of needs of individual workers.

Some unions appear to be attempting to adapt, but are, unfortunately, only doubling down on the intimidation-based, one-size-fits-all union model of the past. These union front organizations, commonly known as worker centers, are using the same tactics of old to expand the power of existing unions, rather than creatively meeting the needs of modern workers.

In order to thrive, unions must move away from the old model based on coercion and monopolistic privileges granted by labor laws of the last century. The way for unions to grow and better serve workers is to shift to an operating principal based on voluntary association, where unions must compete for the hard-earned support of their members. Unions should only represent workers who desire to be represented and serve the unique needs of the skilled worker of the 21st century.

In many situations, even the choice of union representation could be further individualized. Instead of simply giving a worker a take-it-or-leave-it proposal, unions could specialize in a la carte services, where members pick and choose what they want from one or multiple unions.

The four methods by which unions might reform and improve highlighted in this study are: 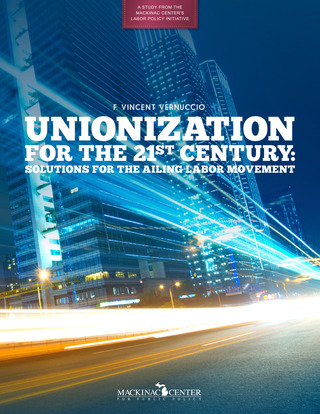