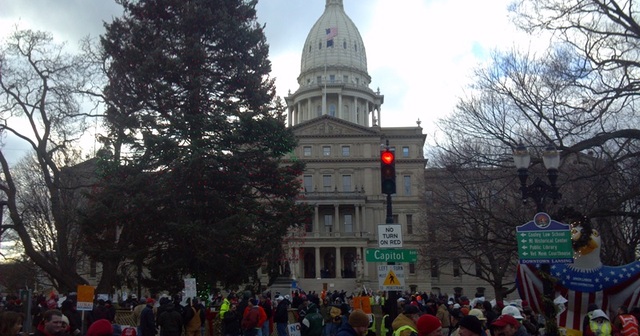 Unions protesting over right-to-work in 2012.
Blog

Unions' bark worse than their bite

Yesterday’s election was not so much a referendum on labor reform as yet another reminder that when elected officials protect freedom and taxpayers they do not need to fear the wrath of the union political juggernaut.

These reformers winning and opponents losing cannot be easily dismissed as “it was a Republican wave which protected the politicians who took on labor reform.” Almost more striking than what was in the Republican wins was what was not in the Democrat losses.

In Michigan for example, the birthplace of the UAW, the state with the 5th highest union membership rate in the country and long considered a labor stronghold, right-to-work was nowhere to be found in the election. Not on the ballot as an initiative or Constitutional Amendment, nor even in the gubernatorial or legislative races.

During the sole Michigan gubernatorial debate of the season, the only time worker freedom came up was as a subpart of another question and one that neither candidate addressed.

So low was the saliency of right-to-work as a negative issue that even representatives from the Michigan Education Association dismissed it. At a right-to-work panel discussion in October, MEA communications consultant David Crim explicitly stated:

I do not believe that on November 4th when people go to the polls they are going to say ‘you know what I am going to decide who I am going to vote for, for governor, for the legislature, any office on the ballot based on the right-to-work law that was passed…’ See 46:30 on video

This is a far cry from the violent protests outside the Capitol and a “there will be blood” threat by Rep. Douglas Geiss, D-Taylor, during the passage of Michigan’s right-to-work law in 2012.

In Wisconsin, proxies for Gov. Scott Walker’s reforms have been on the ballot almost too many times to count. In every election that was deemed a ‘must win’ by unions to repeal labor reforms there was a loss. In fact, after the initial flurry of recall attempts, Gov. Walker’s budget repair bill was not a central issue of the Democratic campaigns.

The same goes for the legislators who voted for right-to-work in Indiana and even for Gov. Kasich in Ohio, whose labor reforms were overturned yet still won re-election handily last night.

Big Labor lost four of the five gubernatorial races the AFL-CIO initially said it would focus on — Michigan, Ohio, Pennsylvania, Wisconsin and Florida — with Pennsylvania being their only win.

As Lee Saunders, chairman of the AFL-CIO’s political committee, told The New York Times in February, ousting Republicans in the industrial battleground states was “about survival.”

Labor lost races that were not even initially on their radar. This shockingly includes Illinois, where Gov.-Elect Bruce Rauner dared to take on forced unionism.

The “survival” lesson from the 2014 election is that labor reform is not the third rail of politics. Despite enduring a lot of noise from Big Labor, reformers need not fear its wrath. Voters will continue to reward those who support freedom and taxpayers.

As for labor’s survival, this election should be a lesson. It is time they give up the compulsion and privileges of the past. In order to not just survive but grow, they need to adapt.