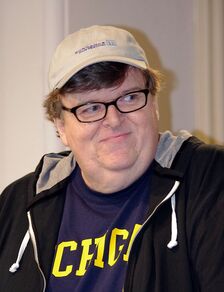 Michael Moore received over $840,000 from Michigan taxpayers to make a film (image via David Shankbone at Wikicommons).

The Michigan Senate passed a bill yesterday that gets rid of the sunset provision for the state’s film incentive program, meaning the subsidies are set to continue beyond 2017. Senate Bill 1103 also removes a clause that previously capped the amount taxpayers would spend on highly paid out-of-state workers (such as actors, directors and producers), which is currently set at $540,000.

Mackinac Center experts have railed against the subsidy program because it has cost nearly half a billion dollars, but resulted in no new jobs, takes money away from other projects that better serve the public and is widely recognized as one of the poorest ways for states to spend tax dollars.

Joe Henchman is the vice president of state projects for the nonpartisan Tax Foundation. He was in Michigan recently to give an award to Gov. Snyder for tax reform and was asked by MIRS News about the film credit program.

“These states (with film incentive programs) are essentially writing checks to Hollywood — which is one of the most profitable industries in America — for what amount to transient jobs that don’t last very long,” Henchman said.

He expands upon this in a blog on the Tax Foundation website:

A big reason why Michigan pared the program back was a 2010 state-commissioned study that found the incentives cost $117 million and created 1,039 full-time equivalent jobs, for a cost of $112,800 per new job. Due to the nature of the film industry, most of the jobs are temporary and transient, with production companies using out-of-state labor to fill many positions.

Since then, California has tripled its film credit spending to over $300 million per year, and New York is over $400 million per year. To do battle with these states requires writing enormous checks to one of the most profitable industries in America. I would think Michigan has bigger priorities for its tax dollars than handouts for Hollywood.

SB 1103 now heads to the House for consideration. Members of the GOP-dominated chamber have a decision on whether they will stand by their previous support for ending the program, or take a vote to continue it indefinitely.