Why are RTW States Gaining Population? 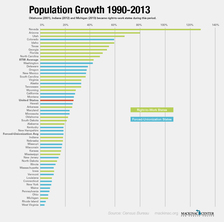 If you listen to opponents of right-to-work laws, the claims are dire. But if laws allowing workers the choice of whether to pay money to a union lead to such alleged problems, why are so many people moving from forced unionism states to right-to-work states?

My colleague Michael Van Beek takes a look at a new study by Richard Vedder, an Ohio University professor and member of the Mackinac Center Board of Scholars, and researcher Jonathon Robe. Long story short, they show significant gains in income and jobs for right-to-work states.

But they also include the following statistic: “[T]he proportion of the American population living in a right-to-work environment has steadily grown, jumping from about 29 percent in 1970 to 46 percent by 2013.”

Probably the most important economic measure is population growth. In the policy literature, it is often difficult to tease out how much of an effect a single policy has on a state’s economy, but people deciding to uproot their lives and move somewhere helps encapsulate the bulk of what many people desire.

In that measure, right-to-work states are dominating.