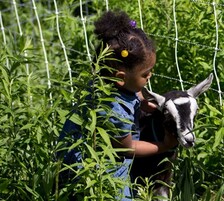 In the midst of the city going through a bankruptcy, talk of a Detroit turnaround is in the air from Gov. Rick Snyder on down.

And while the emergency manager and bankruptcy process are making solid strides toward fixing the city's fiscal mess, it is in the other ways of governing that Detroit needs to improve if it wants to retain and attract residents.

This shows up prominently once again in its recent treatment of a group of goats brought into the Brightmoor neighborhood to clear up weeds and unwanted vegetation. It took only one day for officials to evict the animals with nary an explanation.

This isn't surprising. Detroit has more rules, regulations, mandates and delays preventing people from living their lives than anywhere else in Michigan.

It isn't so much this specific ordinance that is the problem. Detroit joins many municipalities around the state in banning farm animals within the city limits. It is the fact that an insolvent city at the top of several national crime statistics that cannot keep the lights on is spending time and effort focusing on regulatory rules that seemingly result in no harm to anyone.

Detroit has licensing rules well beyond that of other cities. Its permit and inspection costs make it extremely difficult to run a profitable (legal) business. And the infamous "Operation Compliance" where the city looks to shut down 20 companies a week that don't comply with all of these specific rules. Statements from city officials show these are largely a short-term revenue grab.

Enticing people to come and operate businesses is what the city needs to do and it can do so at no cost to taxpayers. That's why a complete overhaul of Detroit's regulatory regime is probably the most important thing it can do now to turn itself around. There has been some promise — like a partial embrace of the ride-sharing services Uber and Lyft — but this is an area where the mayor and council need to use a hatchet, not a scalpel.

In the meantime, it is private enterprise looking to pick up the city's slack. Volunteer "mower gangs" and friendly goats are working to eliminate blight in some of the worst areas. The city doesn't need to do anything but get out of the way.