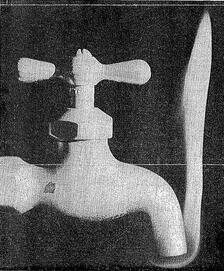 A pamphlet from 1965 from the Michigan Department of Public Health. Natural gas in the water supply has long existed unrelated to gas drilling.

Bridge Magazine, a publication of The Center for Michigan, had a recent series of articles on hydraulic fracturing ("fracking"), and while the author provides some value, including good interviews with residents and a look at the externalities of drilling, the pieces make some errors — one in particular is egregious enough that it should be corrected.

The author cites the anti-fracking film, "Gasland," and references an infamous scene in the movie where a man is shown lighting methane coming out of his faucet on fire. This has become a defining scene for the anti-gas left.

In the piece, author Jacob Wheeler says, "These movies boast facts and evidence that appeal to the viewer's critical thinking, but like many motion pictures, they also offer an emotional punch to the gut."

He adds, "[Gasland's] most memorable scene features Weld County, Colo., landowner Mike Markham igniting gas from a well water faucet in his home with a cigarette lighter, and which the film's director attributed to natural gas exploration in the area." The scene and movie is cited favorably elsewhere.

According to the Colorado Department of Natural Resources, an extensive investigation showed that the gas in Markham's water supply "was not related to oil and gas activity." The report goes on to note that it has been well known for decades that the water aquifer in the area is contaminated with naturally occurring methane.

Wheeler did not respond to a request for comment.

Last year, Michigan Capitol Confidential featured a series of stories on the issue of hydraulic fracturing by talking with a series of experts (including one who was featured in "Gasland"). Here is what they said when asked about the film scene:

Terry Engelder, a professor of geosciences at Penn State University, said that "all reasonably objective reporters regard the film as misinformation."

Anthony Ingraffea, a professor of engineering at Cornell University, said, "In the strict sense of the word, that [lighting water on fire] has nothing to do with the word [fracking]."

Donald Siegel, a professor of earth sciences at Syracuse University, noted that while "gas migration to home water supplies looked spectacular when lit up like a candle … study after study has shown that many homes have groundwater naturally with methane in it, and many with methane sufficient to set on fire."

If people believe the risk and damage from gas drilling is not worth the economic productivity, they should try and prove it. But that should be done with real proof — not unrelated propaganda masquerading as evidence.