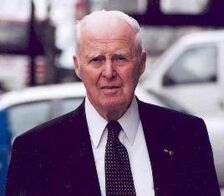 I was 21-years-old before I first heard the name Norman Borlaug. It’s a shame it took until my third year of college to learn about one of the greatest humans who ever lived.

Borlaug, who died in 2009, was an Iowa-born scientist who spent his life teaching new farming techniques in third world countries. His movement was eventually called the "Green Revolution."

Borlaug was introduced to me during a discussion about another of my heroes — the late economist Julian Simon. Simon was the author of, "The Ultimate Resource," in which he argued ferociously against Malthusian concerns about overpopulation. One of Simon's main points was that human ingenuity was the greatest of resources, able to overcome problems seemingly caused by finite resources.

This debate still exists, but it was much more strident a few decades ago, culminating with the 1968 bestseller, "The Population Bomb," by Paul Ehrlich. In the book, Ehrlich infamously predicted a coming economic crash resulting from overpopulation:

The battle to feed all of humanity is over ... In the 1970s and 1980s hundreds of millions of people will starve to death in spite of any crash programs embarked upon now.

He later said, 'I have yet to meet anyone familiar with the situation who thinks India will be self-sufficient in food by 1971,' and 'India couldn't possibly feed two hundred million more people by 1980.'

The book stated that it was "a fantasy" that India would "ever" feed itself.

(Interestingly, I was introduced to Ehrlich’s book as a freshman in high school. What a sad state of education when Ehrlich, who lost a famous bet with Simon, is mandatory reading at many schools while few people are aware of Borlaug.)

In the meantime, Borlaug was putting into place what Ehrlich claimed was impossible. His work began being used in India in the early 1960s and by the mid-1970s (a few years after Ehrlich’s claims) the country was feeding itself. As noted by Ronald Bailey, the science correspondent for Reason:

In Pakistan, wheat yields rose from 4.6 million tons in 1965 to 8.4 million in 1970. In India, they rose from 12.3 million tons to 20 million. And the yields continue to increase. Last year [1999], India harvested a record 73.5 million tons of wheat, up 11.5 percent from 1998. Since Ehrlich's dire predictions in 1968, India's population has more than doubled, its wheat production has more than tripled, and its economy has grown nine-fold.

Equally remarkable feats were happening in Mexico, where the country went from importing half its food to becoming a net exporter in a mere 20 years because of Borlaug's efforts.

Borlaug is the best proof of Simon's belief in humans as "the ultimate resource," as ingenuity leads to technological advances. And this theory has aged well, evidenced by the world poverty rate declining 80 percent since 1970 as things get better and better.