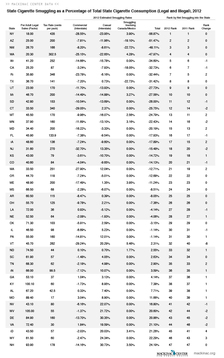 As state and local units of government continue to increase cigarette excise taxes to raise revenue, smugglers apparently continue to profit from their illicit trafficking.

We estimate that for 2012, 27.6 percent of all cigarettes consumed in Michigan were smuggled into the state.

Nationwide, our research — and other academic papers — suggest that cigarette smuggling is not abating dramatically. There is both empirical and recent anecdotal evidence to suggest the problem is increasing in some areas and right alongside big excise tax hikes.

We just published our fourth set of smuggling estimates for 47 of the 48 contiguous states, expanding our research to include data through 2012. Previous editions were released last year as well as in 2008 and 2010.

The 2008 and 2010 reports contain detailed explanations of the statistical modeling effort we use. In short, the model matches up legal paid sales versus predicted smoking rates. The difference between the two is our total smuggling rate, which we then compare to variables based on cigarette tax rates. Our model has been peer reviewed by doctorate-level economists and its output is relatively similar to that of other scholarly efforts.

Michigan's smuggling rate for 2012 is down slightly from the previous year, though it still ranks 10th highest in the nation.

The top five out-bound smuggling states are New Hampshire (25 percent); Wyoming (22.3 percent); Idaho (21.3 percent), Virginia (21.1 percent); and Delaware (20.9 percent). Only Idaho is a new addition to the list of top five exports, displacing West Virginia. For every 100 cigarettes consumed in New Hampshire, 25 more were smuggled to neighboring states such as Massachusetts.

The state of Massachusetts is currently wrestling with how to thwart a large smuggling problem and has formed an "Illegal Tobacco Commission." Its findings and recommendations will be released March 1 and are reported to include a call for a greater law enforcement effort.

A 2013 study published in the journal Tobacco Control and titled, "Cigarette Trafficking in Five Northeastern U.S. Cities," found that almost 40 percent of discarded cigarette packages in Boston were found to have tax stamps from other jurisdictions. That is, they were brought in from elsewhere. A tax stamp is used as evidence that cigarette excise taxes have been paid in a particular jurisdiction.

This is the most recent, but not the only discarded cigarette pack-type study completed by scholars for peer reviewed journals. A 2012 report also published in Tobacco Control examined illicit cigarettes in "socioeconomically deprived" neighborhoods (South Bronx, New York) and reported that 57.9 percent of the cigarettes packs collected were untaxed. Other studies using this technique have been in done in Chicago and Ontario, Canada, and have also reported significant smuggling.

Michigan's smuggling rate is split almost evenly between commercial and casual categories and contains an export component, too. According to our study, for every 100 cigarettes consumed in Michigan another 3.3 percent were smuggled into Canada.

We would be remiss if we did not also remind readers that smuggling is not the only activity that increases as excise taxes go up. We have chronicled instances of a terror group being funded by Michigan-related trafficking; adulterated and dangerous products; brazen thefts from wholesalers and retailers; and violence toward people and police. Just last September police in metro Detroit were forced to shoot at cigarette thieves in fear for their lives.

Unless tobacco excise tax rates start coming down we will likely see a lot more stories like the ones listed above.

Michael D. LaFaive is director of the Morey Fiscal Policy Institute at the Mackinac Center for Public Policy, a research and educational institute headquartered in Midland, Mich. Todd Nesbit is senior lecturer in economics at Ohio State University and a member of the Center’s Board of Scholars. Permission to reprint in whole or in part is hereby granted, provided that the authors and the Center are properly cited.