Brewers Should Be Careful What They Wish For 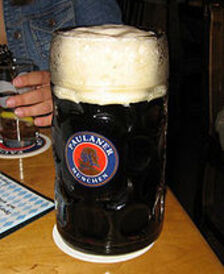 With a slew of bills, the Michigan Senate is moving slightly in the direction of more freedom for beer drinkers.

But, with the backing of some Michigan brewers, the Legislature also voted to codify ridiculous rules that try to pick winners and losers in the marketplace.

At the same time the Michigan Liquor Control Commission was working to repeal some Prohibition Era rules, the Senate voted to put them into law. Bars and restaurants in the state are not allowed to have glasses or napkins with logos on them and if Senate Bill 505 passes the House alcohol manufacturers, sellers and distributors could not give bars and restaurants items that promote their brands.

The Michigan Beer and Wine Wholesalers Association, which represents a lot of craft brewers, agrees with the rule. According to MIRS News, "Their rationale is that allowing big manufacturers like Budweiser to stock restaurants and bars with their logoed glasses, possibly in exchange for getting tap space in those places, would crowd out the little guys, including Michigan's burgeoning craft beer industry."

But that doesn't make any sense. People should be able to freely enter into whatever types of agreements they want. For example, Sam's Club should continue to be allowed to offer free samples of food manufacturers' products; diners should be able to enter into exclusive agreements with Pepsi or Coke or Faygo; stores should offer coupons for certain products; and bars and restaurants should be allowed to accept free merchandise.

If craft brewers want to work out their own deals, they should do so. That's how competition in the marketplace works, and it means cheaper and better products for consumers.

As reported by the Associated Press, the Michigan Restaurant Association notes that Michigan is "the only state to fully prohibit logoed barware items."

"Apparently free market principles and the elimination of frivolous government intrusion are no longer priorities of Senate Republicans," Brian DeBano, president and CEO of the Michigan Restaurant Association, told the AP. "I will be sure to consult with the caucus the next time my members want to change ketchup brands to make sure they approve."

It's particularly disappointing to see the beer and wine wholesalers association working for select restrictions on their larger competitors, considering they have long been the losers in Michigan's complicated and unnecessary alcohol regulation regime.

It is not the job of government to pick and choose winners and losers in the marketplace.

Brewers and establishments of all sizes should be aware of one of former Mackinac Center President Larry Reed's Seven Principles of Sound Public Policy: "[A] government that's big enough to give you everything you want is big enough to take away everything you've got."