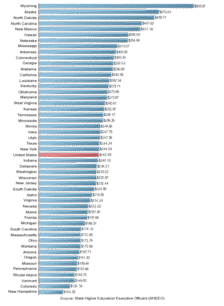 Michigan’s current budget increases the amount of money going toward funding higher education. This increase in funding has been pushed for by some of the groups representing those in the business community as well as, of course, the universities themselves.

But evidence shows this would likely be a poor investment.

I've written many times about specific and nuanced reasons why the state should decrease its role in college funding. More information can be found in the article "Five Reasons the State Shouldn’t Subsidize Higher Education" among many others.

At the national level, despite a 10-fold increase in federal funding, a lower percentage of low-income citizens are getting college degrees today than 40 years ago (12 percent in 1970 vs. 7 percent today).

On the state level, funding for higher education has little to do with a state's economic success. And a state simply stockpiling people with college degrees — referred to by my colleague James Hohman as "talent mercantilism" — has not lead to job growth.

The image nearby is university funding by state measured as the amount of state and local support for operating expenses per capita. It is not as simple as the rich states funding higher education while the poor states do not.

As Richard Vedder, director of the Center for College Affordability and Productivity at Ohio University and a Mackinac Center adjunct scholar, noted in his 2007 study, "higher education expenditures are not growth inducing."

Every Michigan resident should seek out the education they think will most help them advance in the career and life that they want. But government subsidies distort this process, and can do more harm than good.