Lou Glazer of Michigan Future is a big fan of higher education. For Glazer, "human capital" as measured by the number of college degrees in a state is the key determinant of economic prosperity. But evidence suggests that a single-minded focus on increasing the proportion of a state's population with college degrees is a dead end for improving the state's economy.

For example, between 2000 and 2008, Georgia experienced substantial growth in the number of residents with college degrees, increasing its proportion of graduates by 13 percent. But it fell 11 places in state per capita personal income rankings, from 26th to 37th place. Indiana's graduate population grew more than all but two other states, but that didn't prevent its income ranking from dropping eight places, from 32nd to 41st.

North Dakota led the country in increasing its graduate population, and it also enjoyed the second best performance among the states in per capita personal income growth. In contrast, the similar economy of Wyoming had the best performance by this measure, but was near the bottom (48th) in growing its graduate base. Large amounts of oil and natural gas exploration were responsible for much of that economic growth in this western state. But even when North Dakota beats every other state in following Glazer's prescription, its economic consequences are indistinguishable from Wyoming, a state that effectively took the opposite prescription.

In fact, as the chart below illustrates, there is no correlation between a state increasing its college graduate base and growing its economy:

If the hypothesis promoted by Glazer and the lobbyists engaged by Michigan's tax-supported public universities was correct, the various points on this chart would be clustered around an upward sloping line, as states with higher growth in the number of grads also enjoyed relative improvements in income. However, no such trend line exists.

Glazer paradoxically argues that growth is an inappropriate metric for judging a state's economic prosperity. Of course, in order to become a prosperous state, a state's economy and incomes must grow. But even when comparing the shifting ranks among states in graduate proportions and per capita personal income, once again, no trend can be discerned. There was no relationship between changes in a state's ranking in the number of grads and its relative economic well-being. 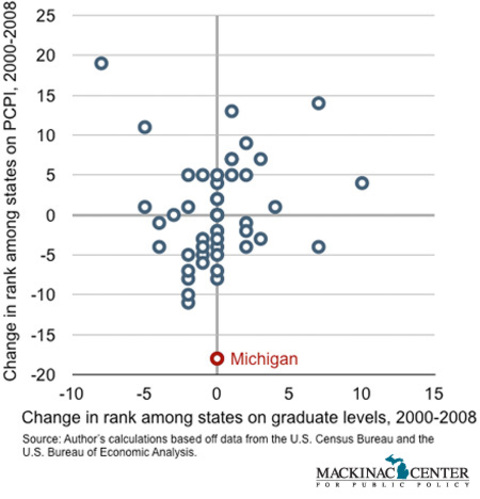 Finally, perhaps greater prosperity arising from an increase in the relative numbers of college degrees only occurs a few years after the grads get their diplomas or arrive in the state. Yet there is no correlation even when lags are built into the comparison. The chart below compares state grad growth between 2000 and 2005 and income growth in the three succeeding years; once again no pattern can be detected.

There is no denying that getting a college education is important to individuals, and that more people acquire college degrees in rich states. But becoming a rich state requires something other than having lots of graduates. There are reforms that would help Michigan's government budget and economy. These are reforms based on Michigan's current environment instead of a bet on policies unassociated with success.