Residents happy and officials in Sandy Springs, Ga., get re-elected with huge margin 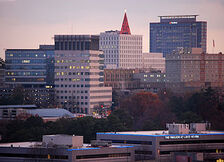 The skyline of Sandy Springs.

When Sandy Springs, Ga., became the "city that outsourced everything" in 2005, it did it out of necessity.

Today, the town of about 100,000 residents has great roads, a state of the art traffic system, award-winning parks, and has funded major capital improvements every year without once raising taxes.

Oliver Porter served as the interim city manager for Sandy Springs and spoke about his experience in that role at a Mackinac Center for Public Policy “Issues and Ideas” forum in Lansing on Wednesday.

"I judge [city] success on two factors: efficiency and response to the public," Porter said. "Based on that, we've been a success."

Before Porter got there, the city was a part of Fulton County, paying high taxes for few services. For decades, Sandy Springs had petitioned the Georgia Legislature to allow it to form its own government. In 2005, the state finally allowed it, contingent on a vote of the people.

The residents voted in June 2005, to form their own city and 92 percent approved. But the city had to be up-and-running on Dec. 1 of the same year.

"I don't know what you would do if you had to have public services in six months, but [shopping around with private vendors] is what I did," Porter said.

For a city about the size of Lansing, he bid out 12 main services to groups that often outsourced to smaller vendors. When certain guarantees could not be met, Sandy Springs chose someone else, which is why most of the time the city found it wasn't prudent to use the lowest bid.

In the contracts, the companies providing the services also had to pledge to have a live person answer phone calls and emails 24 hours a day, seven days a week. They also had to commit to respond to a problem within 48 hours.

"The key is writing the contracts well," Porter said. "But there is incentive for the companies because if they screw up, we can use someone else. That doesn't happen in government."

City taxpayers outsource everything with the exception of public safety, which was explored, determined not to be a good option. However, police officers and firefighters are on 401(k), defined contribution retirement plans, not pension programs.

The city owns no buildings — not even city hall — and little equipment, which means it doesn't have to worry about depreciation on property or assets.

Residents are happy, re-electing every incumbent. For the incumbents who ran for re-election, the lowest vote-getter received 84 percent of the tally. And Porter said the morale of city workers is "sky high" because the companies actually care about their ideas to improve; efficiency is the name of the game in the private-sector.

Porter did emphasize that it is essential that a cost-benefit analysis is done with each contract.

In the past few years, five other cities in Georgia have followed the Sandy Springs model. Porter said he thinks existing cities can do the same, but the biggest obstacle is politics because local elected officials a "are not willing to consider alternative models because they were elected under one system and are afraid to stick their necks out, even if another model is more efficient."

However, increasingly burdensome health care and pension obligations have pushed many cities to the brink, and politicians are forced to take a look at what Sandy Springs has done.

"I tell every city official I meet: Your main job is not to supply jobs — it's to serve taxpayers," Porter said.

To see a ReasonTV video about Sandy Springs, click here.

Here is the video for the event: