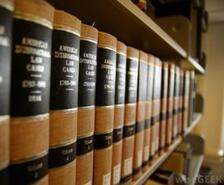 A man seducing and corrupting the moral purity of an unmarried woman is a felony with possible prison time. Throwing a few bucks into the office college basketball tournament pool is illegal gambling. And playing the national anthem for people to dance to is a misdemeanor.

Though routinely broken and ignored by citizens and government officials, these laws and more are on the books in Michigan. In fact, there are so many statutes in the state code that it is likely every resident would be considered a criminal if the codes actually were prosecuted.

State and federal laws are being added so quickly that the average citizen commits three felonies per day and cannot possibly figure them all out, said attorney Harvey Silverglate.

“Many laws are indeed routinely broken,” he said. “Since no individual can keep track of what is illegal, every citizen is in danger of being singled out for prosecution simply because he or she has come within the sights of a law enforcement official. This makes us all vulnerable to official power.”

Silverglate is the author of the book, “Three Felonies A Day,” and estimates that there are 4,000 federal criminal statues with countless more state and local regulations.

In Michigan, some of these laws seem crazy, archaic or both.

Authorities would have to prosecute within a year, but if they do, Section 532 of an early 1930s law criminalizes "any man who shall seduce and debauch any unmarried woman." The act is a felony, punishable by up to five years in prison or a $2,500 fine.

Michigan’s law regarding the national anthem is Act 328 of 1931. It prevents the “Star Spangled Banner” from being “played, sung or otherwise rendered … except as an entire and separate composition or number and without embellishments … nor be played as a part or selection of a medley of any kind … nor be played for dancing or as an exit march.”

Another statute involves low-level gambling. Though state law allows an exception for card games played at home in which there is no money taken by the house, it remains mostly illegal to make monetary bets — even on minor things. While an estimated 50 million Americans fill out March Madness brackets, those putting money in a pool are breaking state law, which prohibits betting on college sports.

"From a legal standpoint, gambling is still illegal, although I think that generally enforcement turns a blind eye to these things,” Travis Dafoe, a Saginaw County lawyer, told MLive in March. And the federal government has been known to warn its employees against taking part in betting on the basketball tournament.

Other acts prohibited in the state include having an unlicensed dog (the sheriff is required to kill the animal), adultery (a felony), mocking a person for refusing to duel, exhibiting deformed human beings, marrying an inmate girl from the Adrian training school without the permission of the superintendent, and cursing or blasphemy.

And while these may sound crazy, some are occasionally prosecuted.

In 1998, a man dubbed the “cussing canoeist” was convicted of violating a 105-year-old law for swearing after he fell out of a canoe on the Rifle River. The 1897 statute “prohibited using indecent, immoral, vulgar or insulting language in the presence or hearing of women or children.” While the ACLU eventually had the law struck down by the Court of Appeals, a separate Court of Appeals case from 1996 held that “the fact that a statute has not been recently enforced does not mean that it has been repealed de facto.” The case, Stopera v. DiMarco, cited Washtenaw Co. Rd Comm'rs v. Public Service Comm. (1957), which stated “statutes do not wither by disuse.”

Many of the laws on the books in Michigan may be considered unconstitutional if ever actually prosecuted. And while the regulations are mostly forgotten, ignored or unknown, there they sit for whenever the state or another citizen wants to go after someone.

“An excess of laws is very bad for society,” Silverglate said. “It saps the vitality of a state or nation for citizens to have to spend so much time figuring out if they may or may not take a certain action — with a misjudgment at their peril.”

(Editor's Note: The law making it a misdemeanor for a person to display an emblem or insignia of any group on their vehicle unless they are actually a member (Act 269 of 1929) was overturned by a Court of Appeals ruling in 1979. This article has been updated.)