Motown on the Slab

A review of Charlie LeDuff's "Detroit: An American Autopsy" 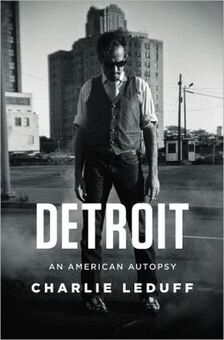 Responding to Stephen Decatur’s dictum, “My country right or wrong,” G.K. Chesterton offered this corrective: “My country, right or wrong is like saying, my mother, drunk or sober.” For those Michigan natives who staunchly apply Decatur’s adage to the Motor City, Charlie LeDuff’s latest, “Detroit: An American Autopsy,” reminds them that Mother Detroit has been on a bender for nearly 50 years.

In true “gonzo” fashion, LeDuff insinuates himself directly into his story, detailing his decision to return to southeast Michigan with his wife and daughter to take a job at The Detroit News. Anyone with even a passing familiarity with LeDuff’s journalism is familiar with his crackling prose and his hard-edged knack of uncovering compelling stories. “An American Autopsy” is no different and, perhaps, is the feather in the cap of one of Michigan’s best writers.

Among those residents who chose to stay in Detroit through riots, drug plagues and political scandals are LeDuff’s family. LeDuff and his siblings were raised on Joy Road in Detroit. The steady decline of the neighborhood took its toll in a fashion that can be described only as heartrending.

His mother was a florist who finally closed down her shop on Jefferson Avenue after vandals repeatedly struck; his brother Billy was a loan officer who wrote negative-amortization, subprime-home loans — including a failed mortgage Billy wrote on his own home; and an older sister, Nicole, who becomes a casualty of drugs and prostitution; and Nicole’s drug-addicted daughter, Ashley.

The tragedies endured by the LeDuff family serve as a microcosm for the devastation of an entire city beset upon by a culture that considers hard work a sucker’s game; crony bureaucrats looting the public trough; dilapidated buildings; the seemingly endless parade of politicians riding the revolving door between elected office and the hoosegow; an infinite number of dead bodies left in the wake of an undeterred crime wave; devastation of neighborhoods by ill-conceived urban planning; high taxes on top of higher parking tickets; and, finally, the very real pervasiveness of racism both white-on-black and black-on-white.

LeDuff contrasts this sorry state with those dedicated individuals who attempt to maintain a semblance of order in a city that increasingly resembles an inner circle of some Dantesque Inferno — the overworked, understaffed and equipment-challenged homicide cops, firefighters and medical examiners. “There are plenty of good people in Detroit,” writes LeDuff. “Tens of thousands of them. Hundreds of thousands. There are lawyers and doctors and auto executives with nice homes and good jobs and community elders trying to make things better, teachers who spend their money on the classroom, people who mow the lawn out of respect for a dead neighbor, parents who raise their children, ministers who help with funeral expenses.”

LeDuff recognizes the lure of such despair for a journalist:

Bad things are good for us reporters. We are body collectors of sorts. To tell the truth, it is amusing to be a correspondent, the guy who drops in with his parachute, proclaims he knows everything, makes outrageous proclamations, types it up, gets drunk in the hotel lounge, folds up his parachute, packs up his hangover and heads to the next spot of human misery.

It’s grim stuff, and LeDuff employs the language of those in the thick of said grimness to convey it all. Suffice to say those offended by the colorful language of an HBO dramatic series will be well-advised to steer clear. If readers weren’t already aware of the news stories — of a body frozen head-first in ice at the bottom of an abandoned elevator shaft; the murder of Tamara “Strawberry” Greene; the salacious emails between the former mayor and his chief of staff; the City Council outbursts wherein one member called another “Shrek; “and the “First 48” debacle that killed an innocent bystander — they could be forgiven for thinking “Detroit: An American Autopsy” is one of Michigan-based Elmore Leonard’s darker crime novels.

But for one reference to a Chevy Neon in The Detroit News’ car pool (Neon is a Dodge brand), it’s assumed all of LeDuff’s facts are accurate. Your writer’s only cavil is that LeDuff relies too heavily on laying blame at the feet of Wall Street chicanery and white/industrial flight for many of Detroit’s ills. Reading the book, I found myself wishing LeDuff had displayed the same honesty he exhibited recently on Bill Maher’s “Real Time.”

On that program LeDuff leveled a scathing rebuke not only at subprime mortgage lenders and Wall Street paper-bundlers but as well those who dishonestly took out loans they knew they either could not or never intended to repay — much to Maher’s obvious discomfort. Left unmentioned by LeDuff in both the book and on Maher’s program is the arm-twisting complicity of government programs that encouraged approving home loans for those who otherwise wouldn’t qualify.

This last, one should add, isn’t really the point of LeDuff’s book, which, after all, is subtitled “An American Autopsy.” A coroner doesn’t examine why a drug addict took to the crack pipe that eventually ended his life. What he does do is determine it was an overdose of an extremely toxic, mostly manmade substance that arrested the addict’s heart and choked out his life.

This, too, is the job of a journalist, performed by a writer in control of the full faculty of his prose powers. LeDuff has submitted his autopsy report. It’s up to the social scientists to draft the crime scene investigation.

As Detroit’s population sinks below 700,000 and coyotes and deer reclaim their ancestral home in now-abandoned lots, it appears the city’s new Emergency Financial Manager Kevyn Orr may be the last, best hope left for the City of No Lights. A comeback story would make for a terrific sequel.